A Live Reading of the Daily Gentrifier (East Coast Edition)

A Live Reading of the Daily Gentrifier (East Coast Edition)

The Daily Gentrifier promises to give gentrifiers “the refined fine print” about the goings on in their up-and-coming neighborhoods, with one side focusing on New York, and the other on Los Angeles. Designed, edited, and published by artist and editor Dushko Petrovich, the two-sided broadsheet measures 22”x30” and was completely hand-drawn before being digitally scanned and letterpress printed. Contributors Aruna D’Souza, Alexander Dwinell, Aaron Gemill, Christopher Glazek, and William Pohida will read from the magazine, followed by a discussion with the contributors and the audience, moderated by Daily Gentrifier editor, Dushko Petrovich.

Copies of the Daily Gentrifier will be available for purchase, but the price has gone up $10 per month, so it currently costs $80. More information can be found at www.thedailygentrifier.com

Dushko Petrovich is the publisher and editor of The Daily Gentrifier. He is also a co-founder of Paper Monument, and he is currently the Graduate Director in the New Arts Journalism program at the School of the Art Institute of Chicago.

Aruna D’Souza writes about modern and contemporary art, food, and culture; intersectional feminisms and other forms of politics; and how museums shape our views of each other and the world. Her latest book, Whitewalling: Art, Race, & Protest in 3 Acts, will be published this spring by Badlands Unlimited.

Alexander Dwinell is a Brooklyn-based artist, publisher, and editor. As part of the South End Press collective he published such authors as Vandana Shiva, Mumia Abu-Jamal and Oscar Olivera. He has exhibited at Flux Factory, Smack Mellon, Temporary Agency, and Carriage Trade and his work and writing has appeared in publications such as Emergency Index, Latin American Perspective, and Stencil Pirates.

Aaron Gemmill is an artist, designer, and publisher based in Philadelphia. He is the author of Condo Report.

Christopher Glazek is a writer living in New York. His reporting and essays have appeared in The New York Times Magazine, The New Yorker, Artforum, and n+1. He is the founder of the Yale Aids Memorial Project.

William Powhida is an artist and activist best known for his mapping of contemporary art's intricate social hierarchies. 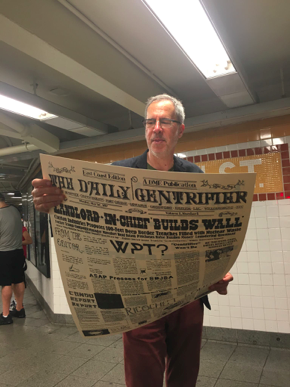