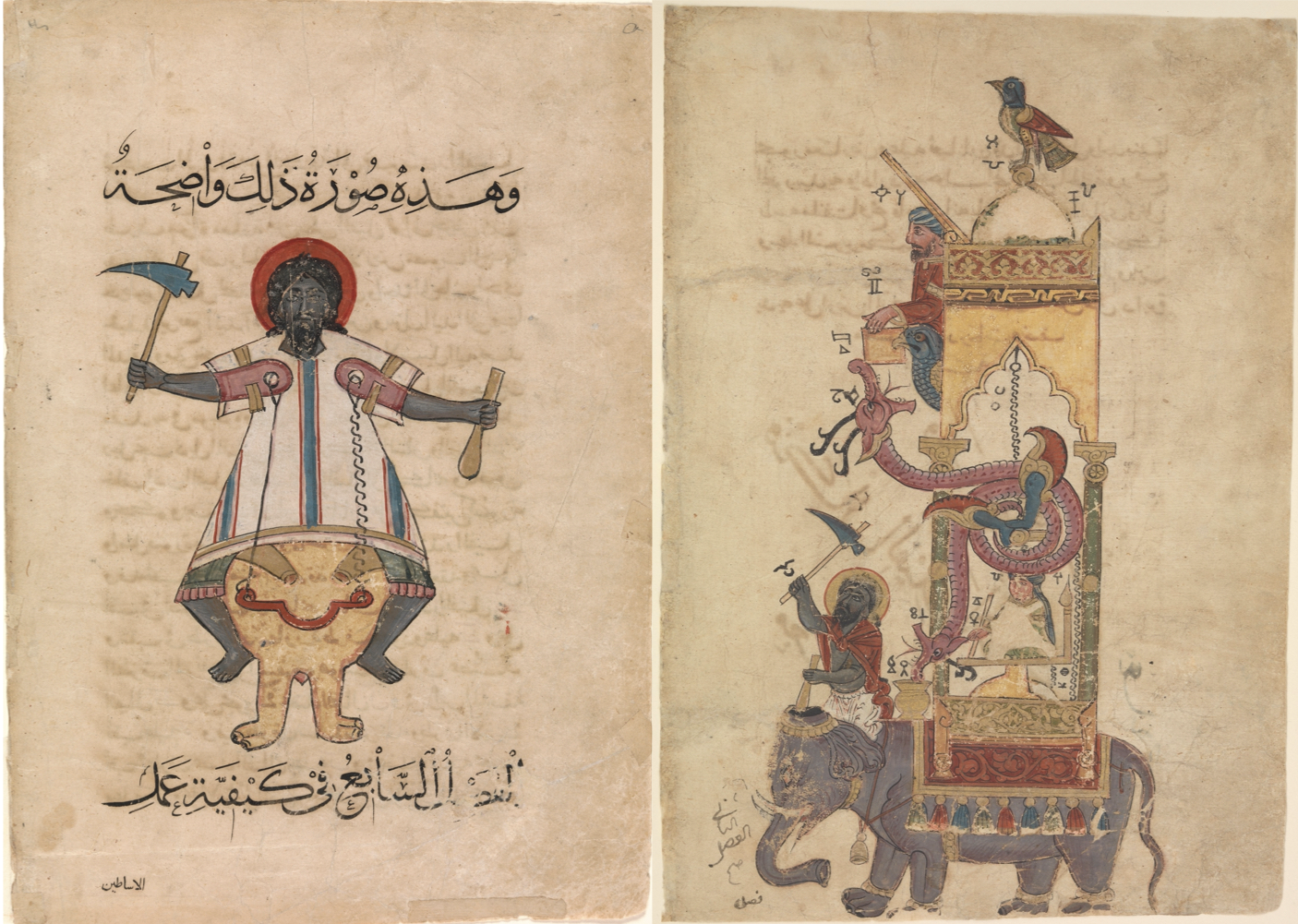 Long before the fantasy of the robot, the production of mechanical devices in the form of moving animal or human figures was well documented in the Islamic lands. The knowledge of such works was transmitted from Greek and other sources, and may also represent aspects of continuity with late antique urban practice. As early as the eighth century a monumental water-clock featuring mechanical birds and snakes was apparently installed at one of the gates of the Friday Mosque of Damascus. In addition, the presence of such marvels features in accounts of pre-modern courts often in surprising contexts: at the court of the Zayyanid rulers of Tlemcen in North Africa, for example, the birth of the prophet Muhammad was celebrated by the performance of an automaton in the form of a clock with moving animals from which emerged a servant girl bearing a paper on which the hours of the day were versified.

As this suggest, mechanical devices could transform acts of labor into gestures of wonder for courtly entertainment. Mechanical marvels often featured subaltern or exotic figures, an aspect captured in Arabic manuals detailing the construction of such devices, which were sometimes heavily illustrated. Standing at the intersection between the histories of art and of science, such manuals also attest to the complex interrelations between the command of technology and the articulation of authority. The phenomenon continued into the early modern period, when European clocks featuring moving figures were imported to the Islamic lands, or sent as diplomatic gifts to Islamic courts.

In keeping with the theme of this semester’s lecture series, Body and Senses, this workshop brings together scholars whose work addresses aspects of the economy, technology, and transcultural reception of pre- and early modern mechanical devices and the knowledge and theory underlying their popularity from Anatolia and Egypt to Syria and Iraq.

Title: Revisiting the Function of Mechanical Devices in Islamic Civilization

Abstract: One of the long-debated problems regarding the understanding of the place, in Islamic intellectual history, of several treatises produced during the hey-day of Islamic Civilization – usually designated as Ḥiyal (Mechanical) works – concerns whether those treatises described automata, toys, practical engineering works or just simple entertaining devices. Saliba addressed this issue in 1985, in the special issue of the Annals of the New York Academy of Sciences devoted to science and technology (No. 441). In the present talk, he will revisit the debate once more and now highlight the concepts of isṭinbāt (invention) and ikhrāj (bringing forth) as helpful conceptual tools in understanding the literary and philosophical significance of the production of such treatises in the first place.

Bio: George Saliba is currently the Founding Director of the Farouk K. Jabre Center for Arabic & Islamic Science & Philosophy, at the American University of Beirut and holder of the Jabre Khwarizmi Chair at the Department of History and Archaeology at the same institution. He concurrently holds the position of Emeritus Professor at Columbia University’s Department of Middle East, South Asian and African Studies since 1979. He has also occupied the positions of Distinguished Senior Scholar at the Kluge Center, Library of Congress 2005-2006, and Carnegie Scholar 2009-2010. He is the author of, among others, Islamic Science and the Making of the European Renaissance, MIT Press 2007 (paper 2011). And more recently Features of Originality and Creativity in the late Islamic Sientific Commentaries: The Works of Shams al-Dīn al- Khafrī (d. 1550) (Arabic), Furqan, London and Cairo, 2015.

Title: The Maiden that Fooled the Poet: Exploring Mechanical Devices in the Medieval Islamicate World

Abstract: Four short poems by the Arab poet al-Mutanabbī (d. 965) describe an intricate automaton found at the court of his patron, the governor of the military district of Jordan, Badr ibn ʿAmmār ibn Ismaʾil al-Kharshanī (d. 942). The contrivance was a ludic device suitable for banquets and parties in the form of a maiden. According to the poet, this artificial maid was meant to play the role of arbiter of the drinking sessions. Once activated, it spun around with a bouquet held in one hand until it came to rest in front of a guest, who, as a result, was obliged to drain a cup of wine and come up with some poetic verses on the spot. By analysing al-Mutanabbī’s poems and comparing the information he offers on such devices with the descriptions of similar contrivances mentioned by Arabic technical treatises, this paper aims at exploring the automaton’s operation and its practical use in the court of Badr ibn ʿAmmār.

Bio: Alessia Zubani is currently a postdoctoral fellow at the Excellence Research cluster HASTEC (History and Anthropology of Knowledge, Technologies, and Belief) in Paris. In broad terms, her research focuses on the relationship between politics and techniques in the Late Antique and Medieval Middle East, with attention to the production and political use of mechanical contrivances in court societies. By studying how rulers conceptualised and publicly displayed automata and other ingenious devices at court, she addresses issues of political ideology definition, cross-cultural interactions, and transmission of scientific, political, and religious ideas through the Eastern Mediterranean and the Middle East.

Abstract: This talk explores the eight life-size mechanical sculptures stationed in the majlis of the early twelfth-century Fatimid vizier al-Afdal Shahanshah (r. 1094-1121) as technological embodiments of enslavement. Performing for viewers, the jewel-bedecked female figurines purportedly bowed their heads when al-Afdal entered the hall and returned to their upright position when he found his seat. The detailed textual description of these female mannequins also notes that four were white and made of camphor, and four were black and made of amber, indicating that these automata would have likely released an aroma into the spaces they shared. Through their mechanical performances and material properties, the robotic replicas performed the enslaved, racialized female body in order to undergird the supremacy of the Fatimid caliphate. In this talk, and in theoretical conversation with Kettler's Smell of Racism, I focus specifically on how olfaction may have been used to aesthetically define racialized subjects and their representations in the Fatimid world.

Bio: Holley Ledbetter is a PhD candidate in the History of Art Department at the University of Michigan specializing in pre-modern Islamic art. Her primary field of research is Fatimid art and architecture, with a focus on the intersectionality of race and gender, mechanical devices, and representations of the enslaved in the Fatimid world. Holley’s dissertation project, Wonder, Image, and the Fatimids, explores objects of wonder in the Fatimid world. She also pursues research in cultural exchange between the Islamic world and the Vikings. She recently contributed to The Seas and the Mobility of Islamic Art (Yale University Press, 2021) with an essay entitled “Exchange and Alteration: The Viking Afterlives of Samanid Silver.” She is a Fulbright-Hays fellow for the 2022-2023 academic year.

Abstract: From 1547 to 1593, Habsburg rulers of the Holy Roman Empire were forced to pay the Sultan of the Ottoman Empire annual tribute. A result of a truce, this transcultural transfer of wealth was referred to by German speakers as the Türkenvererhrung or the ‘Turkish gifts’. Each year the tribute payment (40,000 ducats) was supplemented by precious objects—namely silver and gold vessels, clocks, and figured clockwork automata. Although scores were sent to high-ranking Ottoman officials over the 46-year period, very few of these automata survive. According to German sources written during the period, the clocks and automata were neglected by the Ottomans, and as a result decayed. This paper explores these sixteenth-century German texts and addresses ways they discussed the treatment and dematerialization of the automata.

Bio: Jessica Keating is Associate Professor of Early Modern Art at Carleton College. She is author of Animating Empire: Automata, the Holy Roman Empire, and the Early Modern World (Penn State Press, 2018). Her next book, Impossible Nature: The World of Giuseppe Arcimboldo is forthcoming and is part of Reaktion Book’s Renaissance Lives series.

This event will take place in person and on Zoom at 12:30pm EST (New York time). To register as an online attendee, please use the following link:
https://nyu.zoom.us/webinar/register/WN_ad7GxfXlSrSS6dkKidbXCw

This event will also be held in person at the Hagop Kevorkian Centre for Near Eastern Studies, 50 Washington Square S, New York, NY 10012. In accordance with university regulations, visitors must show a valid government-issued photo ID (children under 18 can provide non-government identification). Visitors must show proof of being up-to-date on their COVID-19 vaccination, which includes the booster when eligible, with an FDA-authorized or WHO-listed vaccine. Documentation must include:

Co-sponsored by the Hagop Kevorkian Center for Near Eastern Studies.