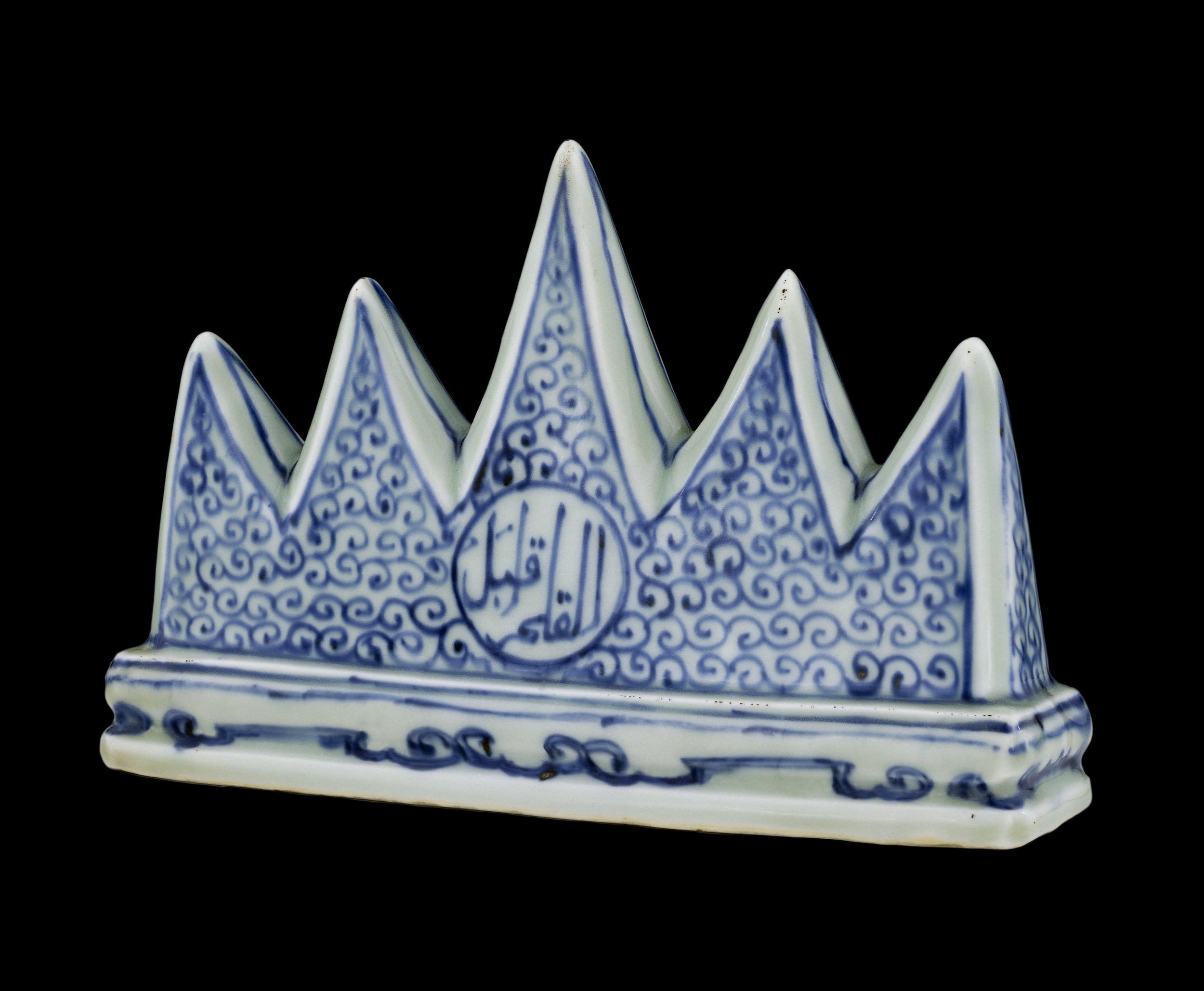 A collaboration with the NYU Institute of Fine Arts, China Workshop

Over the past decades, archaeological excavation in China has brought to light a wide range of portable objects produced in the medieval Islamic world. Many of these come from dated contexts, providing fixed points in their chronology that are sometimes lacking in their place of production. The material culture of the various Muslim communities of China itself is also attracting increasing attention. In addition to architecture (as witnessed, for example, in Nancy Steinhardt’s 2015 book, China’s Early Mosques), this includes a wide range of portable arts. The recent appearance of Yuan and Ming Qur’an manuscripts closely related to Qur’ans from Ilkhanid Iran but making use of distinctive scripts is a case in point. But the range of relevant materials extends to other media and materials, including ceramics and jade. The contribution of Central Asian craftsmen and designers to Qing court culture is also coming into sharper focus, in addition to the growing scholarship on export ceramics, enamelware, reverse-glass paintings made for Islamic markets in South and South-East Asia and further west. This workshop offers an introduction to some recent work on the Islamic or Islamicate art of China and its relationship to the artistic traditions of the Islamic lands that lay to the west and south.

10.40-11.05 Eiren Shea, Grinnell College, "Quanzhou to Fustat: The Movement of Satin Damask in the Fourteenth Century"

11.05-11.30 Jinyi Liu, NYU Institute of Fine Arts, "Doubling the Efficacy for Apotropaic Protection: A Jade Magic Square from the Lu Family Tomb of the Ming Dynasty in Shanghai (1500s-1620s)"

11.30-11.55 Yu-wen Weng, National Palace Museum, Taipei, "A Preliminary Study on the Transmission of an Islamic Style of Official Kiln Porcelain in Early Ming"

Abstract: Quanzhou’s Ashab Mosque has often been discussed for its foreign-looking architectural forms and the material choice of stone. Few have contemplated the Quranic verses that were carved onto both the interior and exterior walls of the mosque complex. These monumental inscriptions constitute the majority of the sober decorative program in this Muslim sanctuary and are imbued with iconographic meanings that speak to piety. This paper examines the inscriptions found in the Ashab Mosque and around the city of Quanzhou and explores the pious messaging behind their formal, iconographic and material qualities.

Bio: Sylvia Wu is a PhD candidate in the Department of Art History at the University of Chicago. She studies the architecture and material culture of the medieval Indian Ocean, with a particular focus on China’s coastal areas. Her dissertation, Mosques of Elsewhere, examines how knowledge of legendary monuments of the Islamic world informed the blueprints of mosque building in China's southeastern ports, or rather distracted us from recognizing the mosques' local attributions.

Title: Quanzhou to Fustat: The Movement of Satin Damask in the Fourteenth Century

Abstract: A series of satin damask textile fragments allegedly excavated in Fustat and thought to have been woven under the Mongol-ruled Yuan dynasty in China are evidence of a trend for East Asian motifs on textiles and other media that flourished under the third reign of the Mamluk sultan Nasir al-Din Muḥammad (d. 1341 CE). The fragments also raise questions about the transmission of satin damask weaving technology from China to West Asia. This paper traces the routes of exchanges between East and West Asia to uncover how these textiles found their way to Egypt and role of the Mongol empire in the transmission of weaving technology across Eurasia.

Bio: Eiren Shea is an Assistant Professor of Art History at Grinnell College, where she offers classes on arts of pre-modern Asia. Her research interests include the arts and visual cultures of China from the 10th-16th centuries, Asian textiles, and premodern cultural exchange in Asia. Her recent book, Mongol Court Dress, Identity Formation, and Global Exchange investigates the role of dress in the Mongol Empire and the impact of Mongol textiles on Asian and European art and society. Her work has been published in The Textile Museum Journal, Arts Asiatiques, and Ming Studies.

Title: Doubling the Efficacy for Apotropaic Protection: A Jade Magic Square from the Lu Family Tomb of the Ming Dynasty in Shanghai (1500s-1620s)

Abstract: In 1969, while conducting construction for bomb shelters in Pudong, Shanghai, workers accidentally uncovered a multi-burial tomb that belonged to the family of an influential official at the central government of the Ming dynasty (1368-1644). Among the large number of high-quality tomb finds, one object stood out—a jade plaque carved with Arabic letters and numbers. In particular, there are sixteen numbers individually contained in small squares created by the four-by-four table which seem to represent the Islamic magic square. According to Islamic belief, the design of the magic square, used since at least the ninth century, possesses talismanic efficacy against evil harnessed from the powerful numeric combinations. Why and how did this object end up in a Ming official’s tomb? Deciphering this question reveals how the design, form, and material of the amulet were most likely chosen to evoke a heightened sense of “foreignness” yet grounded in a local cultural tradition, which made the object especially potent for its talismanic function. Having had made its way into the burial space of non-believers, this magic square makes visible an interest in the astrological and esoteric knowledge of Islamic culture in Ming China.

Bio: Jinyi Liu is a doctoral student at the Institute of Fine Arts, New York University, with a focus on Chinese art and material culture of the Ming and Qing Dynasties. Her areas of interest include the production of decorative arts, objects of early modern global trade, and the visual and spatial experience of urban landscape.

Title: A Preliminary Study on the Transmission of an Islamic Style of Official Kiln Porcelain in Early Ming

Abstract: There have been considerable researches on the Islamic art styles of the porcelains in the official kilns of the Yongle and Xuande kilns in the Ming Dynasty, including their shapes or patterns.  However,  so far no Islamic artwork (Islamic material evidence) has been found; no archaeological evidence or documents show that Islamic art has ever been introduced to China. How did the craftsmen learn the appearance and characteristics of these works in the first place? This is the subject of my paper.

Bio: Yu-wen Weng is currently an assistant curator at the South Branch of the National Palace Museum in Taipei, specializing in Asian ceramics, Islamic jades, and Islamic culture and art. The exhibitions she has organized include special exhibitions of Vietnamese porcelain, Islamic jades, Japanese Imari porcelain, Ming porcelain and Asian ceramics in the NPM. Recently, she is studying Islamic artifacts in the Qing Palace collection.

Abstract: This lecture focuses on a small group of Canton enamels on copper, with reference to historical documents. It tries to investigate the patrons and traders behind these enamels, how they were commissioned and found their way to their clients, how they circulated, and their possible parallels in the destination community.

Bio: Dr. Xu Xiaodong is Associate Director of the Art Museum at the Chinese University of Hong Kong, and Honorary Researcher Fellow of the Palace Museum, Beijing (2020-2023). Her research interests include Ancient Chinese jade, amber, gold and silver. Her current focus is on maritime trade and the export art of Canton during the Qing dynasty, and Canton enamel on copper in particular.

This event will take place as a live Webinar at 10:00am ET (New York time). To register as an attendee, please use the following link:
https://nyu.zoom.us/webinar/register/WN_WCbHYsOZRtGh3MDY3xZm7Q
Only registered attendees will be able to access this event.