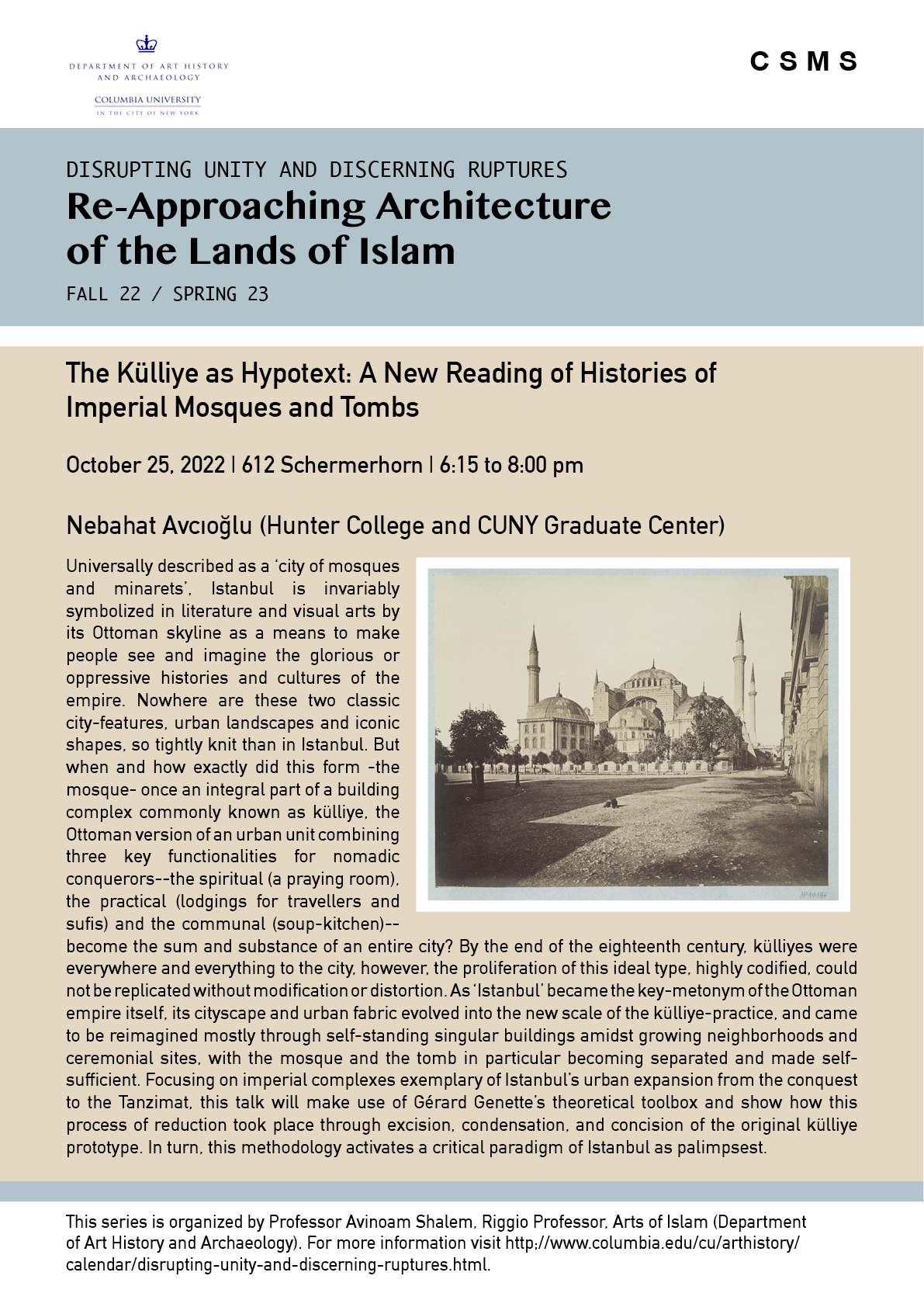 The Külliye as Hypotext: A New Reading of Histories of Imperial Mosques and Tombs

Universally described as a ‘city of mosques and minarets’, Istanbul is invariably symbolized in literature and visual arts by its Ottoman skyline as a means to make people see and imagine the glorious or oppressive histories and cultures of the empire. Nowhere are these two classic city-features, urban landscapes and iconic shapes, so tightly knit than in Istanbul. But when and how exactly did this form--the mosque--, once an integral part of a building complex commonly known as külliye, the Ottoman version of an urban unit combining three key functionalities for nomadic conquerors--the spiritual (a praying room), the practical (lodgings for travellers and sufis) and the communal (soup-kitchen)--become the sum and substance of an entire city? By the end of the eighteenth century, külliyes were everywhere and everything to the city, however, the proliferation of this ideal type, highly codified, could not be replicated without modification or distortion. As ‘Istanbul’ became the key-metonym of the Ottoman empire itself, its cityscape and urban fabric evolved into the new scale of the külliye-practice, and came to be reimagined mostly through self-standing singular buildings amidst growing neighborhoods and ceremonial sites, with the mosque and the tomb in particular becoming separated and made self-sufficient. Focusing on imperial complexes exemplary of Istanbul’s urban expansion from the conquest to the Tanzimat, this talk will make use of Gérard Genette’s theoretical toolbox and show how this process of reduction took place through excision, condensation, and concision of the original külliye prototype. In turn, this methodology activates a critical paradigm of Istanbul as palimpsest. 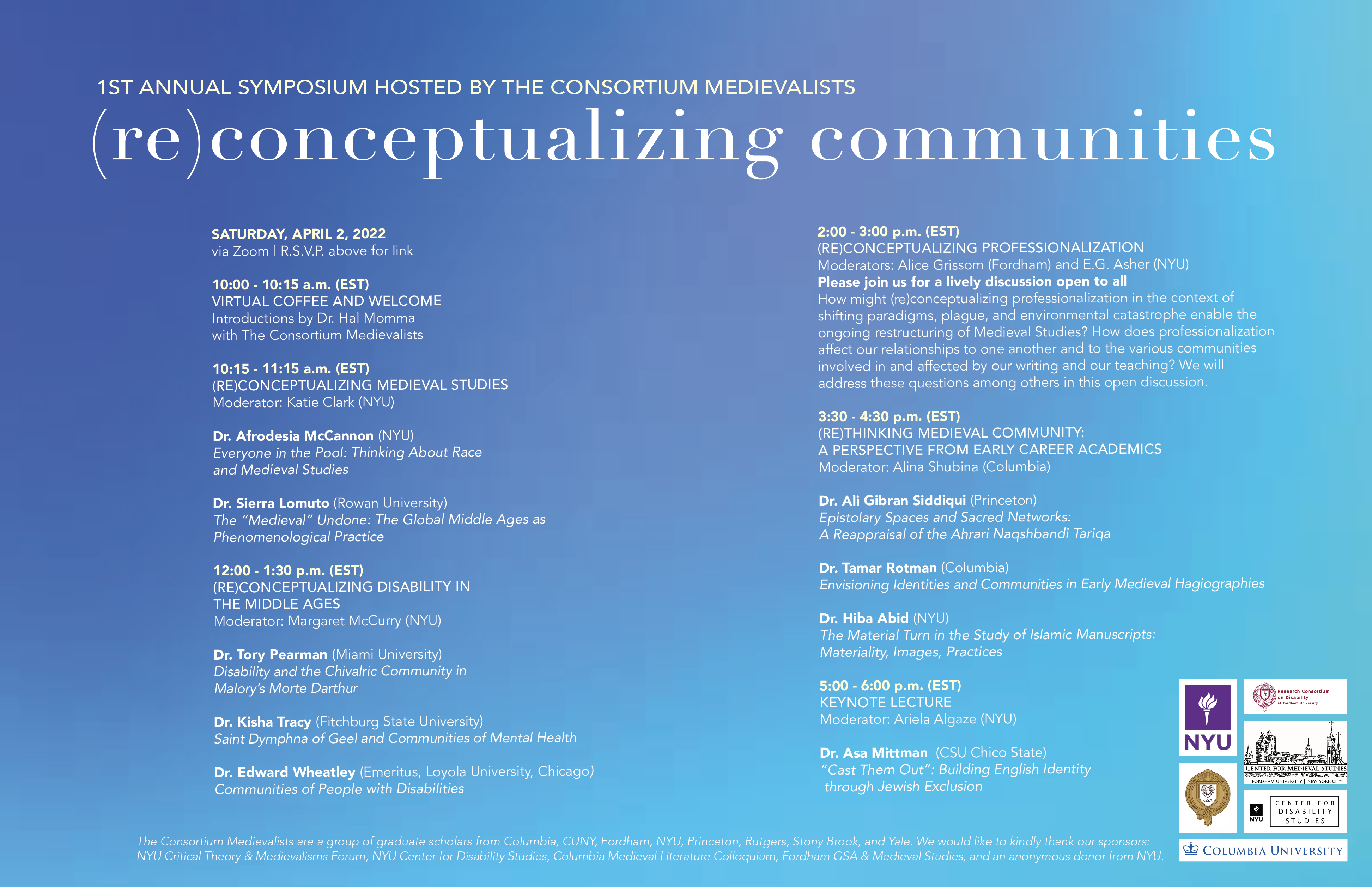 Full programme and registration for the "(re)conceptualizing communities" symposium here. 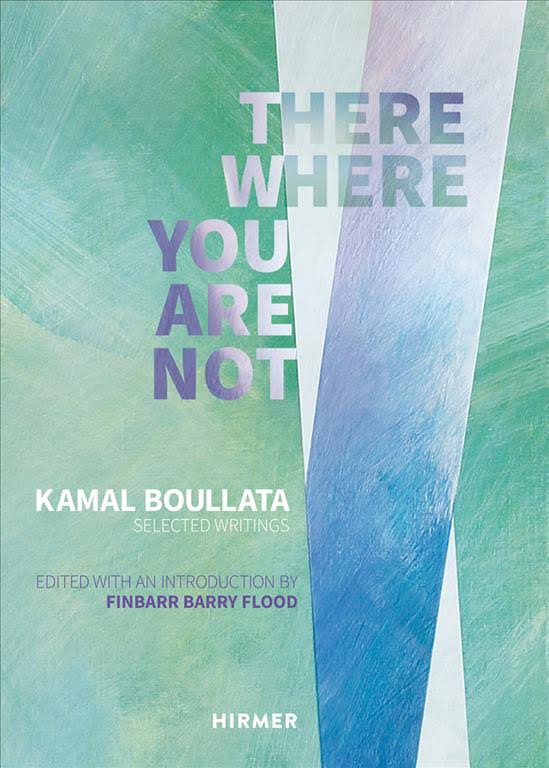 There Where You are Not: Selected Writings of Kamal Boullata, edited by Finbarr Barry Flood, Director of Silsila, wins a Lifetime Achievement Award for the Palestinian artist Kamal Boullata at the Palestine Book Awards.

There Where You are Not: Selected Writings of Kamal Boullata (Hirmer Verlag, 2019), edited by Finbarr Barry Flood, Director of Silsila, won a Lifetime Achievement Award for the Palestinian artist Kamal Boullata (d. 2019) at the Palestine Book Awards on November 5th:

There Where You Are Not brings together the writings of Kamal Boullata, celebrated Palestinian artist and theorist. Produced over four decades of exile in Europe, North Africa, and the United States, the experience of exile and imperatives of resistance permeate the essays, whose subjects range from autobiography to contemporary art, early ruminations on gender relations, language and the visual, to questions of identity and globalization. Taken collectively, the writings explore intersections between aesthetics, history, and politics that are central to the historiography of modern Arab art.

The expanded use by institutions of higher learning across the United States and Canada of corporate-controlled videoconferencing platforms poses threats to the free and safe exchange of ideas. To uphold their commitment to the principles of academic freedom and vigorously protect freedom of expression and exchange of ideas — the hallmark of the — university administrators must address such threats promptly and decisively. The threat posed by corporate control of media platforms is apparent in the recent unilateral actions taken by Zoom to shut down events about Palestine at US universities.