[WEBINAR] MANUFACTURING THE SACRED: OBJECTS OF VENERATION IN THE MODERN ISLAMIC WORLD 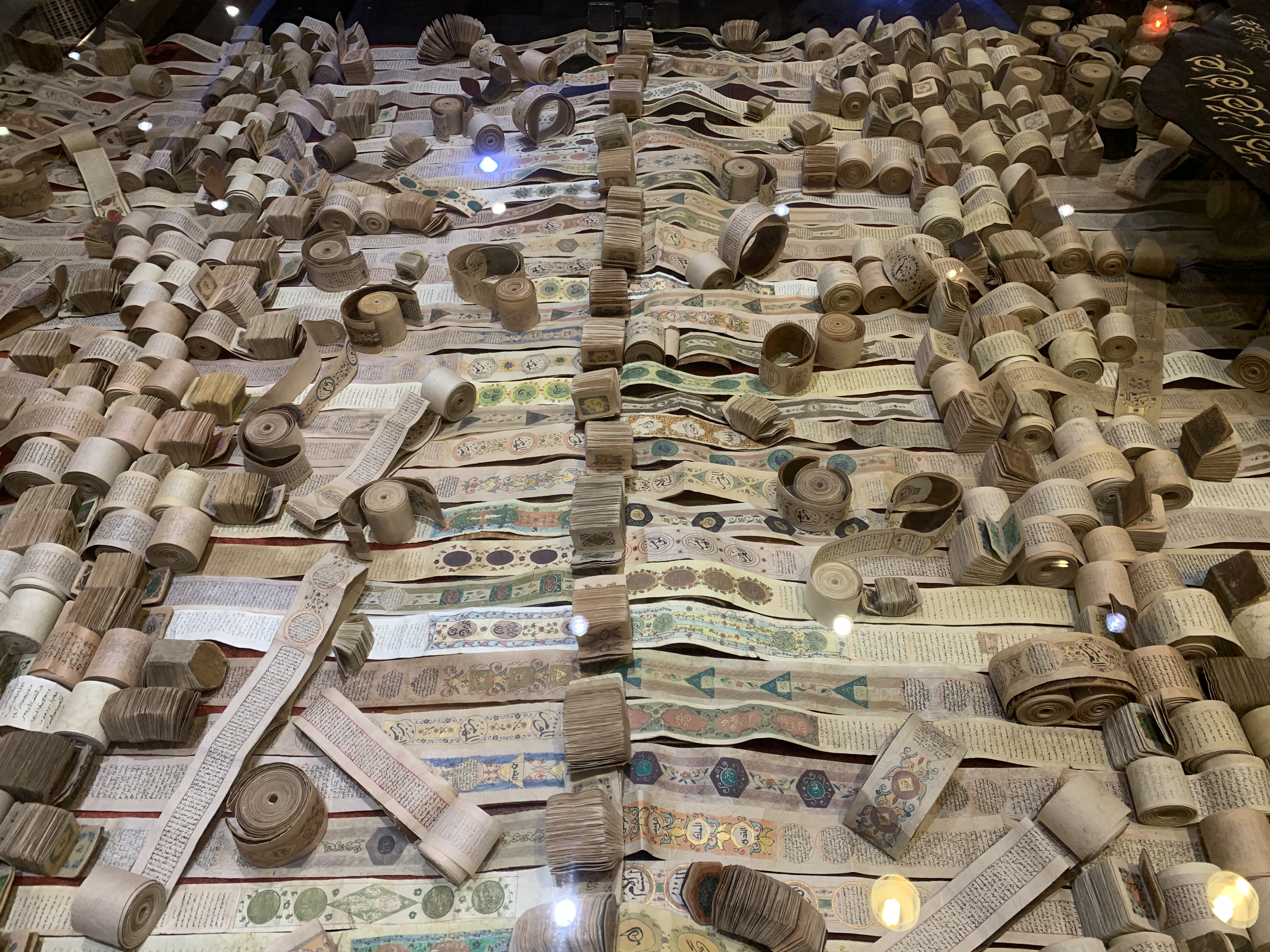 "MANUFACTURING THE SACRED: OBJECTS OF VENERATION IN THE MODERN ISLAMIC WORLD"

In what ways have concepts, methods, and technologies of modernity, since their rise in the late seventeenth century to their present-day manifestations, intersected with the production of sacred art and material culture in Islamic societies? Unlike artworks created prior to the industrial revolution, which were typically hand-crafted in medium-specific artist workshops, more recent visual practices in the Islamic world were transformed by and widely dispersed through modern technologies and tools, such as lithography, mechanized printing, silkscreen artworks, digital interfaces, and even felt-tip markers. This webinar will critically examine sacred objects across different media and Muslim communities—from the Middle East to Southeast Asia—to explore the changing continuities in popular veneration engendered by modern technologies of the Islamic world.

While discourses on modernity have often been associated with notions of secularism and rupture, the papers will demonstrate how some modern artworks produced in the Islamic world maintain strong connections to ritual, sacrality, divination, and other still-common quotidian practices through these new material and technological matrixes. Qur’an manuscripts written in marker, lithographed cosmological charts, hand-tinted pilgrimage prints, and glass paintings of religious figures demonstrate ongoing ties to ritual and tradition. These artworks, often marginalized in Islamic art history due to their mechanical modes of production, allow for discussions of everyday piety and its modern complexities. Concurrently, such works challenge notions of modernity in Islamic societies that favor post-Enlightenment discourses on rationalism and secularism at the expense of the sacred. In highlighting the continued importance of religious and ritual practice in Islamic artistic productions, this webinar will demonstrate how these objects connect to the realm of the sacred in as much as they also belong to practices and visualizations of modernity.

12.05-12.25 Hala Auji, American University of Beirut, "The Business of Sacred Kitsch: Made-to-Order Qur’ans and their Audiences"

Title: The Business of Sacred Kitsch: Made-to-Order Qur’ans and their Audiences

Abstract: How do we study Qur’an manuscripts that unmoor the typical classifications of attribution, authenticity, and craftsmanship? I address this question via two collections of eclectic twentieth century made-to-order Qur’ans, held at the American University of Beirut and Sikander Gallery (Dubai), which challenge customary views of Islamic manuscripts and their audiences. These examples of “sacred kitsch” encompass a range of formats, materials, and methods, including codices of stitched palm leaves, miniature amulets, and monumental volumes illuminated with glitter glue, rhinestones, oil pastels, and felt-tip markers on falsely aged paper. Undated, and lacking the typical marks of attribution or ownership, these Qur’ans were likely produced “on demand” for amateur collectors by minimally trained artisans at workshops in South Asia over the course of the last fifty years. Arguing that such objects allow for insights into the global contemporary Islamic market for and business of everyday piety, this paper explores the ways in which these modern works may serve varied, even conflicting, purposes for different audiences.

Bio: Hala Auji is Associate Professor of Art History at the American University of Beirut where she teaches courses on Middle Eastern and Islamic art. Her work explores the visual dimensions of modernity in the eastern Mediterranean, including print culture, book history, museum practices, and portraiture. Her first book, Printing Arab Modernity: Book Culture and the American Press in Nineteenth-Century Beirut (Brill, 2016) explored the growing significance of the aesthetic dimensions of print culture in Ottoman Syria and its contribution to wider discourses on socio-cultural modernization and reform. She has also published research in numerous venues, including Review of Middle East Studies, Visible Language, and the Middle East Journal of Culture and Communication. Auji is currently a 2021-2022 EUME Fellow at the Forum Transregionale Studien in Berlin where she is working on her second book, tentatively entitled “Pictorial Impressions: The Making of Printed Portraiture in the Eastern Mediterranean.” Her new project considers the translocal visuality, production, social history, and theoretical framing of printed memorial portraiture, at the nexus of photography and painting, in fin-de-siècle Syria and Egypt.

Abstract: With the advent of new printing technologies in the early 20th-century Middle East, previous image-making practices were transformed into new graphic possibilities. Single-page lithographic prints and polychromatic posters offered mass produced and speedier methods for accommodating popular piety, while activating a wider audience and cultural reach. One of the hallmarks of these new media was their strikingly bright, lively, and imaginative colorings. Early prints marked with ornamental dyes suggest they were hand tinted, possibly by printers upon individual purchase at religious pilgrimage sites (such as Jerusalem, Karbala, or Mashhad). Other poster prints demonstrate trial tintings across multiple impressions and offsets of the same print matrix. These vibrantly colored posters indicate the experimental nature of early 20th-century popular printing practices and designs as printers worked to translate older formats (including pilgrimage scrolls and large-scale canvas or wall paintings) into condensed singular printing plates. Typical plate designs of early Islamic posters include religious narratives, popular mythic subjects such as the Prophet’s flying mount al-Buraq, amulets, and other talismanic forms. In exploring the tints, dyes, and coloration practices of early 20th-century Islamic poster designs, this presentation will examine the ways in which these popular materials transferred historic religious visuals into new pictorial environments

Bio: Elizabeth Rauh (PhD, University of Michigan, 2020) is Assistant Professor of Modern Art and Visual Cultures at the American University in Cairo, and currently a Faculty Fellow at the Cleveland Institute of Art (2021-2022). Specializing in modern arts and visual cultures of Iran, Iraq, and Western Asia, her work examines artist engagements with Islamic heritage, popular image practices and technologies in Shi`i Islam, and arts of the twentieth-century "Shi`i Left". She also pursues research in ecological art practices in the history of the Persian Gulf, such as her study: "Experiments in Eden: Midcentury Artist Voyages into the Mesopotamian Marshlands" (Journals of Contemporary Iraq & the Arab World, March 2021). Her research has been funded by The Academic Research Institute in Iraq, the Darat al Funun Center for Modern and Contemporary Arab Art, the Max Weber Foundation, and the Andrew W. Mellon Foundation.

Title: The Sacred and the Illegible: Isim and Rajah in Prints and Paintings of Haryadi Suadi (1939-2016)

Abstract: The artist Haryadi Suadi (1939-2016) is known for his prints and glass paintings that explore Cirebonese visual and spiritual traditions in the history of modern art in Indonesia. Dua Wanita dan Isim (1979) is representative of Haryadi Suadi’s prints and paintings that incorporate an abstracted form of Islamic talismanic inscription known in Cirebon and other parts of Java as isim and rajah. This presentation explores Haryadi’s preoccupation with localized Islamic visuality associated with the development of practices and rituals of non-normative Islam and the shift of materials and materiality in his making process. Haryadi’s use of isim, a non-orthodox scriptural source, and his maintenance of local language and method of representation challenge the mainstream perception and practice of modern Islamic art in Indonesia that prioritized the visuality of proper Quranic calligraphy and abstraction from the 1970s onward.

Bio: Anissa Rahadiningtyas is an art historian and curator of modern and contemporary art in Indonesia and Islamic Southeast Asia. She received her B.F.A. and M.A. from Institut Teknologi Bandung in 2008 and 2012 before pursuing her Ph.D. from the History of Art and Visual Studies Department at Cornell University from 2013-2021. She was a 2019 fellow at Cornell Digital Collections in Arts and Sciences and has held the position of a graduate Curatorial Assistant of Asian Art at the Herbert F. Johnson Museum (2020-2021). At Cornell, she was an instructor of record for a course about traveling objects and images in Islam. She has also worked as an independent curator since 2008 in Indonesia. Her interests include postcolonial theory, Indian Ocean studies, comparative modernisms, and Islamic studies. Anissa accepted the position of Assistant Curator of Islamic Aesthetics of Modern and Contemporary Southeast Asian Art at the National Gallery of Singapore in 2021.

Abstract: In 2015, ISIS burned the Mosul public library whose collection of books included Qur'anic manuscripts. The group’s act can be framed as one that strove to preserve the "original copy" of the Qur’an in the heavens and to destroy all copies held on earth. This performance, like many others of our time that involves the Qur’an manuscript, revives the historically rooted debates related to the materiality of the Qur’an and the ways in which people have engaged with the text's manuscript format. Discussions on the relation of the sacred text to its material form have appeared in early Islamic sources, continued to appear in theological debates and manifest until today in connection to mechanical printing, digital technologies, and even the art market. This paper investigates four different moments in the history of the Qur’an’s materialisation in which the sacredness of the Qur’an manuscript was negotiated and in which the realms of the artistic and the pious, the copy and the original, and the secular and the sacred interrelate.

Bio: Alya Karame is currently a research affiliate in the Fine Arts and Art History Department at the American University of Beirut where she previously held the Mellon Postdoctoral fellowship in 2019-20. In 2018-19, Karame was a postdoctoral fellow supported by the Barakat Trust in the Khalili Research Centre of the Faculty of Oriental Studies at the University of Oxford. In 2016, she joined the Kunsthistorisches Institut research program in Florence Connecting Art Histories in the Museum and was based for two years at the Museum of Islamic Art in Berlin. She obtained her PhD in 2018 in Islamic Art History from the University of Edinburgh and her MA in History of Art & Archaeology from the School of Oriental and African Studies in 2011. Her research has been supported by the Historians of Islamic Art Association (Grabar Postdoctoral Grant), the Arab Funds for Arts and Culture (Research on the Arts Program), and the Forum Transregionale Studien (Art Histories and Aesthetic Practices). She has been lecturing widely on the Qur’an manuscript and leading workshops in museums and academic institutions. She is currently working on her first book project in which she focuses on an understudied corpus of medieval Qur’an manuscripts, investigates the materiality of the Qur’an and challenges established biases in the field.

Title: Mass-producing the Cosmos: Visuality and Divination from Manuscript to Lithograph in 19th-century South Asia

Abstract: The paper explores the genealogy of Tilsimat-i Aja’ib (Talismans of Wonder) texts, a genre that features elements of cosmology and divination, in Urdu lithographs of the 19th and early 20th century. Although cosmological imagery enjoyed a continuity from manuscript to lithography production, it was accompanied by a semiotic shift that imbued new meaning to images in the mass-produced and widely circulated lithographs. This shift complicates the question of the role that printing technologies played in the ‘disenchantment’ brought about by colonial modernity and the supposed epistemic rupture that cultures of Islamic knowledge production underwent as a result; if anything, lithograph production gave new life and circulation to forms of premodern knowledge that evaded reformist intellectual trends and the supposed disenchantment these trends are said to have brought about.

Bio: Nur Sobers-Khan is currently the director of the Aga Khan Documentation Center at MIT, an archive and research centre of Islamic art, visual culture, urbanism and architecture.  She was previously the Lead Curator for South Asia Collections at the British Library and Curator at the Museum of Islamic Art, Doha.  Her research interests cover the early modern Islamic world, the history and continued life of Islamic dream interpretation practices.

This event will take place as a live Webinar at 12:00pm ET (New York time). To register as an attendee, please use the following link:
https://nyu.zoom.us/webinar/register/WN_v19Qqu2DT9agmIWB66QiwQ
Only registered attendees will be able to access this event.