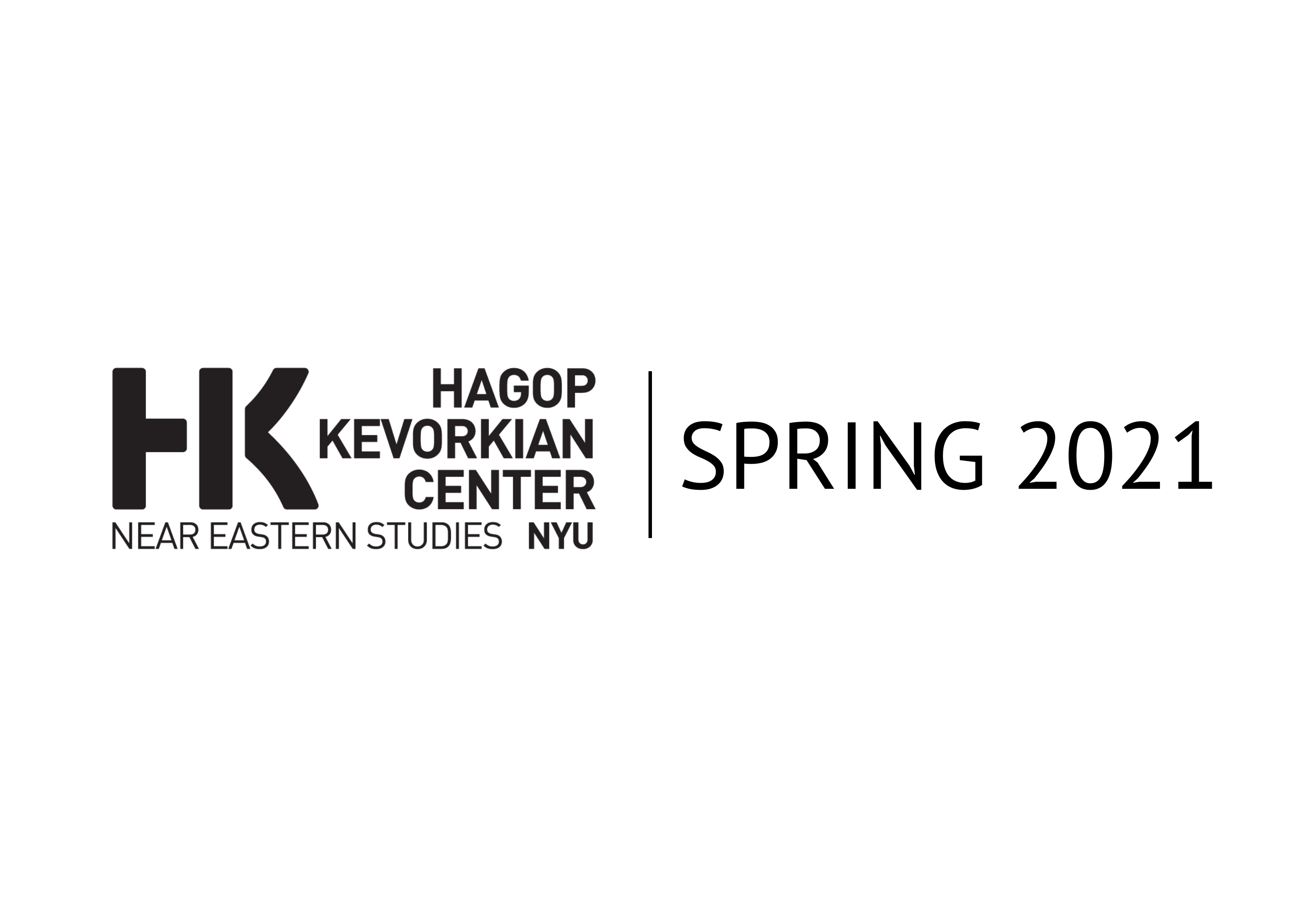 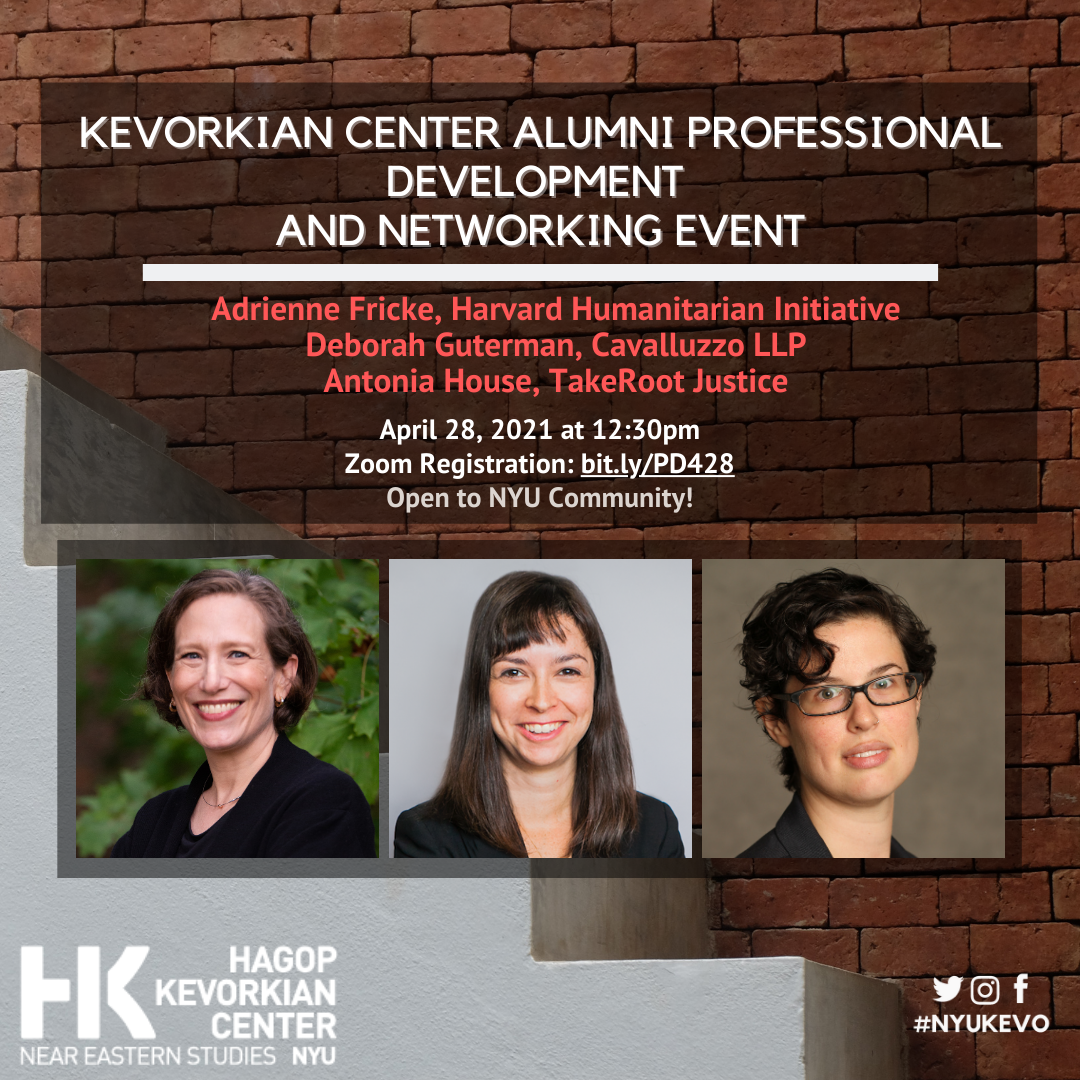 Please join us for another Kevorkian Center Alumni Professional Development Event. This event is open to current NYU students and recent alumni. We will be joined at this event by alumni from the Kevorkian Center's Masters in Near Eastern Studies program who have gone on to become lawyers, and are practicing in fields such as immigration, labor, and international law. The speakers will offer a few thoughts on their career trajectory, and there will be ample time for discussion, questions, and networking.

Antonia House is a staff attorney in TakeRoot Justice’s Immigrants’ Rights practice area. Prior to joining TakeRoot in 2019, Antonia was an immigration staff attorney at Brooklyn Defender Services, an Immigrant Justice Corps Fellow at Make the Road New York, and a student in NYU’s Immigrant Rights Clinic. In each of these roles, her work has focused on supporting immigrants’ rights organizing and the intersection of immigration and criminal law. Antonia earned her J.D. at New York University School of Law, and also holds an M.A. in Near Eastern Studies from NYU. She completed her undergraduate degree in Arabic and Geography at the University of Edinburgh in Scotland, and grew up in New York City.

Deborah Guterman is a junior associate at Cavalluzzo LLP, a leading union-side labour and human rights law firm in Toronto, Ontario, where she works primarily with nurses, teachers, and aerospace workers. Deborah graduated from Kevo in 2012, where she wrote her thesis on Jewish anti-Zionism in the diaspora, and graduated from McGill University's Faculty of Law in 2018. She believes in the importance of collective struggles for dignity, security, and self determination. While at law school, she worked collaboratively with communities seeking social, political, and economic justice by coordinating a migrant justice project, co-founding a prisoners' legal support collective, and learning from organizers with the Brazilian Landless Workers’ Movement. She macramés, stalks puppies at the parc, and makes a mean black beans and rice.

Adrienne Fricke is a Senior Fellow at the Harvard Humanitarian Initiative, a Senior Peace Fellow at the Public Interest Law and Policy Group, and a consultant specializing in human rights and refugee-related issues in the Middle East and Africa. She is lead author of HHI's newest publication, "Window of Hope: Sustaining education of health professionals in northwest Syria." Since 2007, she has worked with Physicians for Human Rights, serving as an Expert Consultant on both Syria and Sudan and author of its report ‘Chaos and Fire’: An Analysis of Sudan’s June 3, 2019 Khartoum Massacre. Adrienne has conducted field missions in Bangladesh, Chad, Colombia, Lebanon, Sierra Leone, Syria, Sudan and Turkey. She was an investigator on the Darfur Atrocities Documentation Team (2004) and PILPG’s Bangladesh Investigation Mission (2018).  She holds a J.D. from the University of Pennsylvania, an M.A. in Near Eastern Studies from New York University, and a B.A. in African Studies from Yale University, and is fluent in Arabic, French, and Spanish.