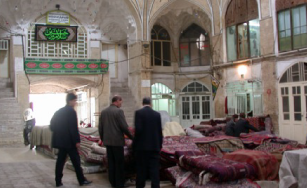 In the latter part of the twentieth century and the beginnings of the twenty-first, Iranian rug producers in response to economic sanctions of goods made in Iran by "Western" nations, began to seek alternative markets that had been partially or marginally penetrated, namely in East and Southeast Asia. The professional union of carpet merchants identified the size, design, color and materials as "undesirable" to the professional union of carpet merchants identified the size, design, and material as "undesirable" to the Asian market which lead to recurring questions of traditional and indigenous designs that have been historically associated with aesthetics of bourgeois European and American taste. innovation in design becomes a key semiotic value in order to under the "new" Asian market and an emerging middle class that would represent idealized consumers of Persian rugs. The carpet-producers negotiated how Persian rugscould retain their autochthony as the merchants renewed their glance eastwards to carve out indigeneity, aesthetics and an emphasis on craftiness over tradition. This lecture will question the assumption that Persian rugs embody a national art form while arguing that in fact rugs as an art form are by nature and deesign transnational in both content and form.