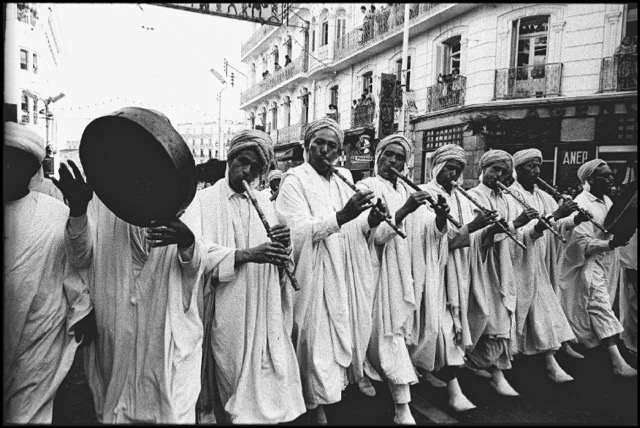 In the lead up to the 1977 Second World Black and African Festival of Arts and Culture (FESTAC ’77) in Lagos, Senegalese president and co-theorist of négritude, Léopold Sédar Senghor, threatened a boycott of the entire affair. His complaint? That the presence of North African Arab nations in FESTAC disrupted what Wole Soyinka would later refer to as a “a family conversation.” That is to say the African family, which did not include those north of the Sahara. Yet during the 1966 World Festival of Negro Arts, hosted in Dakar under Senghor’s leadership, Arab-African nations and participants– among them, and very significantly, Algeria – had freely attended. This paper analyzes the hotly debated evolution of the “Saharan boundary” between North and sub-Saharan Africa across three of the major African cultural festivals of the twentieth century: the 1966 Dakar festival, the 1969 Pan African Festival in Algiers, and Nigeria’s FESTAC ’77. Though the festivals varied wildly in their conception of and approach to cultures of the African continent and its diaspora, I argue that the question of the Sahara loomed large at each event. From Senghor’s infamous Cairo declaration that “Arabité” is wholly distinct from “Africanité,” to the explicitly political framing of the FLN-hosted festival in ‘69, and up to Senghor’s attempt to boycott FESTAC ’77; the imagined Saharan boundary that rendered Arab North Africans so distinct from their sub-Saharan counterparts remains a largely unexamined point of contention at all three festivals. These festival debates make plain that the place of Arab North Africans in modern conceptions of Africa and its diaspora is not articulated through the performed cultures and politics of solidarity, but are rather located within the tensions laid bare at each festival. These tensions, I argue, reveal the centrality of the Sahara in historic cultural explorations of African identity.

Sophia Azeb is a Postdoctoral and Faculty Fellow at New York University’s Gallatin School for Individualized Study. Her research theorizes blackness in Arab North Africa through a multilingual cultural archive of literature, festival, music, and sport. She earned her Ph.D. in American Studies & Ethnicity at the University of Southern California.