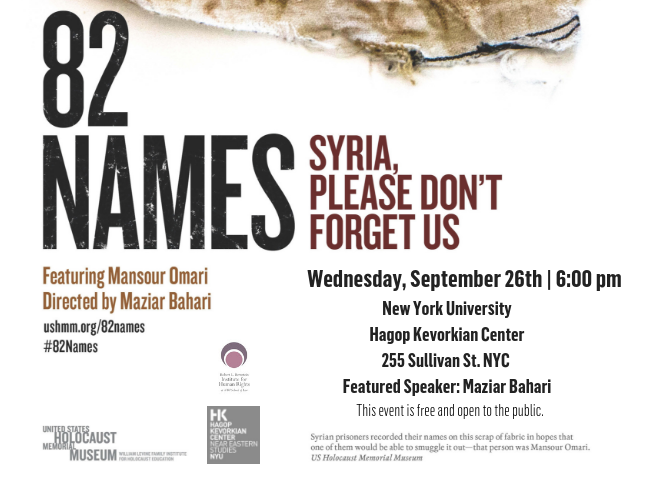 Join us for the film screening of "82 Names: Syria, Please Don't Forget Us" at the Kevorkian Center, in collaboration with United States Holocaust Museum. After the film we will have a Question and Answer session with the Director Maziar Bahari and Mansour Omari, who is the subject of the film.

"82 Names: Syria, Please Don't Forget Us", is a documentary film that traces the journey of Mansour Omari, a survivor of torture and imprisonment in Syria. As Omari seeks to rebuild his life in exile and visits sites in Germany that memorialize the victims of the Holocaust, he reflects on how to bring attention to the brutal regime he escaped—and counter extremist ideology in the future. To connect people with the crisis in Syria, Omari worked with the Museum to create an exhibition about the individuals he knew in prison. 82 Names is a powerful story of how one man risked his life to document atrocity crimes and bring that evidence to the world.

Maziar Bahari is an Iranian Canadian journalist and filmmaker. He was a reporter for Newsweek from 1998 to 2011.

Janelle J. Roberts from the United States Holocaust Museum will also be in attendance to answer questions during the Q&A segement of the event.

Janelle J. Roberts is the policy assistant for the Simon-Skjodt Center for the Prevention of Genocide. She previously served as a legislative and research assistant with the Senate Foreign Relations Committee where she advised Committee leadership as part of the African Affairs team. Janelle also served as the inaugural Donald M. Payne Foreign Policy Fellow with the Congressional Black Caucus Foundation. In that capacity she advised Members in the House and Senate on national security and foreign policy, with particular focus on the Middle East and sub-Saharan Africa. She holds a BA in international affairs from Transylvania University where she studied and conducted research in Jordan as a Boren Scholar. She earned an MPP from the University of Chicago.