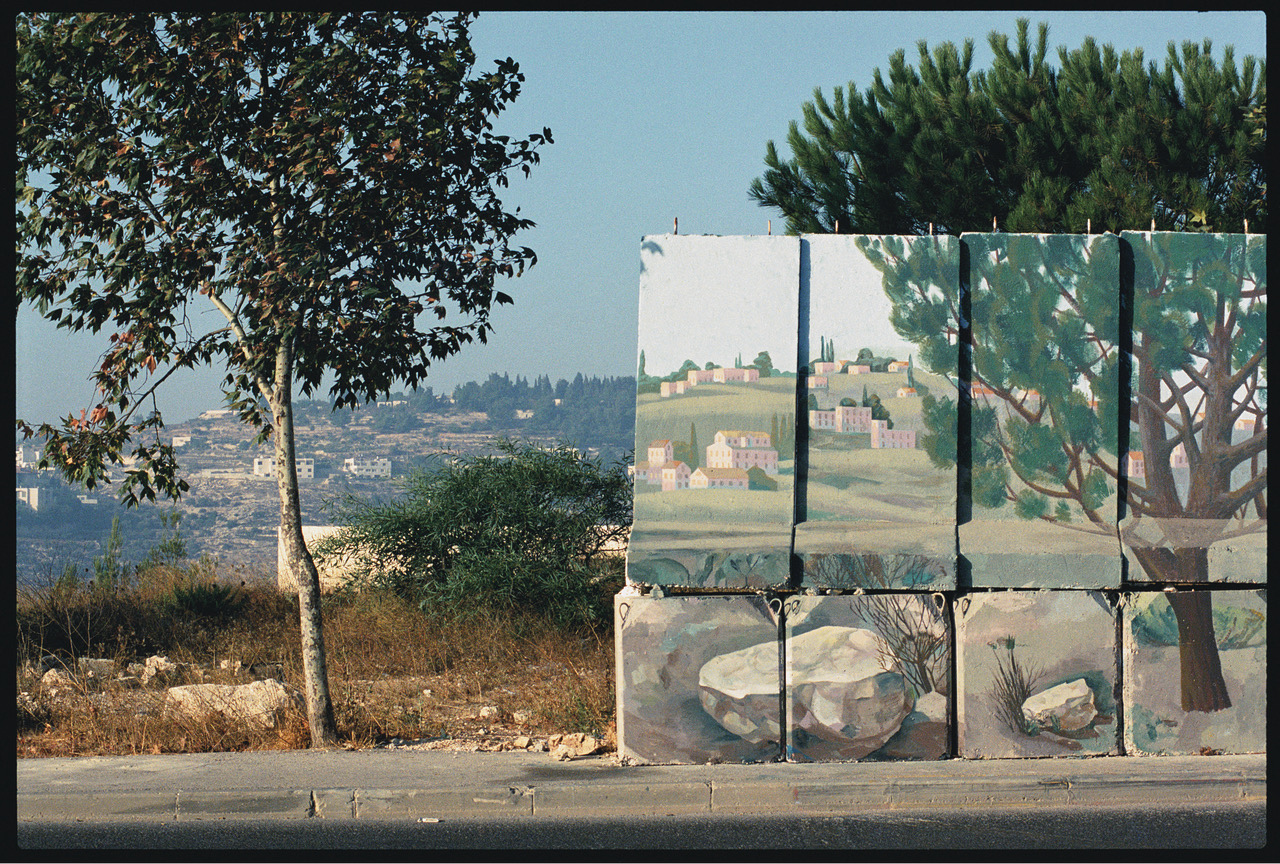 9:30-11:30am - Panel 1: Double Visions of Landscape: Between Erasure and Recognition

This conference explores landscape as a medium of representation in Israel/Palestine. While often thought of as an innocent canvas, landscape serves to naturalize power relations and erase history and legibility. Early Zionist mythology understood this, reflected in the highly gendered celebration of “virgin” land, whose wilderness was waiting to be conquered and fecundated. While such colonial myth-making points to how images, fantasies, and representations of landscape, while often false or superficial, have power to mobilize political passions, this panel goes even further to explore landscape as a site of amnesia and erasure. The conference will converge artists and academics to explore how landscape has been shaped, and has actively transmitted a range of meanings—including the production of cultural heritage and memory; militarism and humanitarianism; displacement and diaspora; and notions of the sublime, pastoral and poetic.

WJT Mitchell is Gaylord Donnelley Distinguished Service Professor of English and Art History at the University of Chicago.  He served as Chair of the English Department from 1988 to 1991, and has been the editor of Critical Inquiry since 1978.  He received his B.A. from Michigan State University in 1963, his M.A. and Ph.D. from Johns Hopkins University in 1968. He taught in the English Department of Ohio State University from 1968-77 before moving to Chicago. He is a member of the American Philosophical Society, the British Academy, and the American Academy of Arts and Sciences. He is the recipient of the University of Chicago Award for Distinguished Graduate Teaching, and the College Art Association’s Lifetime Achievement Award for the Teaching of Art History.

Kamal Aljafari's filmography includes ‘Recollection’ (2015), ‘Port of Memory’ (2009) and ‘The Roof’ (2006). Aljafari’s films have been screened in numerous film festivals including Locarno, Torino, Toronto, Rotterdam, Fidmarseille as well as museums including Tate Modern and MoMa in NYC. He was a featured artist at the 2009 Robert Flaherty Film Seminar in New York, and in 2009/2010 was the Benjamin White Whitney Fellow at Harvard University’s Radcliffe Institute and Film Study Center. In 2010, he taught film at The New School in New York City, and from 2011 to 2013 he was a senior lecturer and head of the directing program for the German Film and Television Academy (DFFB) in Berlin. He received a number of film prizes and art grants, among them Kunstfonds and Kunstiftung NRW fellowships, as well as the Friedrich Vordemberge visual art prize of the city of Cologne in Germany. In 2013, he received the art medal of the state of Rio Grande do Sul in Brazil. In 2016 he was a jury member in the Torino Film Festival and a retrospective on his work took place at Lussas Film Festival in France and at the Cinémathèque Québécoise in Montreal.

Noa Hazan is an Israeli visual culture scholar currently located in New York. She is the Editor of the trilingual Book "The Mount The Dome and the Gaze: The Temple Mount in Israeli Visual Culture" [2017 Tel-Aviv University and Pardes Publishers] and the co-editor of "Visual Culture and Israel" [Hebrew]. She publishes her works regularly in academic Journals and Books on subjects of race, Nationalism photography and Museum Studies. These days she completes her book titled "Race and Visual Culture in Israel" for Indiana University Press.

Meir Gal is an artist, lecturer and designer. Prior to settling in New York in 1987, he lived and worked in Europe for several years. Among other positions, he was the chief curator for a contemporary private art foundation based in  Europe as well as an art critic for the Tel Aviv based Studio Art Magazine. Since 1997 he has been teaching fine art & art theory at the City University of New York & the School of Visual Arts where he’s faculty at the Art History, Fine Art, and Visual & Critical Studies departments. His work has been shown in galleries and museums in Israel, the United States and Europe.

Fatma Shanan is a visual artist. She lives and works in Tel Aviv. Shanan focuses on realistic, large scale painting, mostly in the technique of oil on canvas. Her works are characterized by a theatrical and enigmatic view on scenes, whose participants belong to the various circles of her life, especially surrounding Julis, the Druze village where she was born and raised. Her art strives to deconstruct firm definitions concerning painting as well as gender and national and ethnic identities and to suggest more fluid definitions that can flow through different realms. In her recent paintings, Shanan harnesses her own body to the depicted image, while the connections between body, gender, space and place-making become more and more prominent in her work. These connections are expressed mainly through the image of rugs, which she considers as heterotopic zones: it is a defined object which is taken out if its original context, and can be subversively placed anywhere and anytime in order to create a new location of self-expression. Shanan is the winner of the 2016 Haim Shiff Prize for Figurative-Realist Art given by the Tel Aviv Museum where her fourth solo exhibition will open in the summer of 2017.

Shanan is an alumna of several prestigious residency program, among them the Residency Unlimited Program, NYC and the Artport Residency in Tel Aviv. Her works are included in the collections of the Israel Museum, Jerusalem; The Miniature Museum, The Netherlands; The Tel Aviv Museum of Art, The Ilana Goor Museum, Jaffa and private collections in Israel and abroad.

Jennifer Varela is a PhD candidate in the Department of Middle Eastern and Islamic Studies at NYU. Currently on the Culture and Representation track, she has a background in history, political science, and area studies, with a master’s degree from London’s School of Oriental and African Studies and an Honors BA from the University of Toronto. She is completing her dissertation, “Contact, Confession, Reconciliation: Humanitarian Representations of the Israeli-Palestinian Conflict,” which concentrates on the practice and promotion of liberal humanitarianism to international audiences through an analysis of nonfiction cultural texts and their associated transnational NGO networks. Prior to her PhD, she worked in publishing and for a London-based humanitarian organization, and is a freelance writer on feminist and cultural issues.

Dotan Halevy is a PhD Candidate in the Department of History at Columbia University. His doctoral research project examines the history of Gaza and the broader southern Palestine region in the Late Ottoman and British Mandate periods. He cultivates a special interest in cultural perceptions of ruins and destruction and their intersection with historical narration and amnesia.

Dr. Shirly Bahar is the Director of Cultural and Academic Programs and Art Curator at the American Jewish Historical Society in NY. Shirly was the founder of the 1st Mizrahi Film Series at NYU in 2014. Shirly is currently working on a book manuscript based on her dissertation, “Relating Pain: Performance and the Body in Contemporary Documentary Cinema from Israel/Palestine, written at NYU’s Hebrew and Judaic Studies. Shirly publishes regularly on representation and identity in Israel/Palestine and on representations of gender and sexuality.

Helga Tawil-Souri is a media scholar who focuses on spatiality, technology, and politics in the Middle East and especially Israel/Palestine, and methodologically incorporates political economy, visual and cultural studies, and cultural geography. Broadly, my work critiques the notion that we live in an increasingly open and borderless world, by analyzing how technologies and their infrastructures - such as cell phones and the internet - are explicitly territorial and political and often impose new forms of borders and controls. On the flip side of that, she is equally fascinated by how spaces and 'things' that are overtly territorial and political - borders, checkpoints, and identification cards, for example - themselves function in cultural ways. Most of her teaching is through the Department of Media, Culture, and Communication. Helga teaches undergraduate and graduate courses on topics including borders and spatiality; Arab media; critical theory and media studies; Israel/Palestine; war and media; globalization, international development, and commodities.

Shimrit Lee is PhD Candidate in Middle Eastern Studies at NYU. Her research resides at the intersection of several disciplines: visual culture, political economy, cultural studies, performance, and critical security studies. Her dissertation “Commodified (In)Security: Cultural Mediations of Violence in Israel, Palestine, and Beyond” concentrates on visual cultures of Israel's arms industry, with a focus on the commodification of war through advertising, simulation, and international arms fairs. She also writes on photography, film theory, and contemporary visual arts, and is a currently serving as a curator in residence at Residency Unlimited in Brooklyn.

Ilker Hepkaner is a PhD candidate in NYU’s Middle Eastern and Islamic Studies Department. His dissertation research focuses on the identification of Jews from Turkey in Israel through the lens of politics of space, heritage, and visual culture. He is currently co-editing the Asymptote blog. His writing on the cultural issues in the Middle East has appeared or is forthcoming on The Revealer, Doubt, Comparative Drama, Ajam Media Collective, Jadaliyya, and Muftah.