Since 1967, MESA has held an annual meeting in the fall where members gather to share research. MESA has been the hub for scholarly exchange from its first meeting at The University of Chicago in 1967 where a small group gathered for eight sessions to MESA's 50th anniversary meeting in Boston in 2016 where 312 sessions delighted more than 2,000 attendees. The meeting features panels and special sessions on a variety of topics related to Middle East studies. It is complemented by meetings of MESA's affiliated groups, an exciting 4-day film festival, a comprehensive book bazaar featuring the latest books and software in the field, and other informal events. The meeting provides an opportunity for friends and colleagues from a variety of disciplines to gather to share their common bond: the study of this important region of the world.

Please join us in supporting our affiliated faculty and students presenting throughout the MESA conference:

(5239) New Directions in Modern Arabic Poetry
Organizer & Chair: Ziad Dallal, NYU
featuring: Kevin Antranik Cassem, NYU -  "Between: Punctuation and the Sea in the Work of Etel Adnan" and Ziad Dallal, NYU - "The Acephalic Fate of Prophecy in the Poetry of Ounsi el-Hajj"

(5227) Gender and the Tech Industry - Views from the Arab Periphery
featuring: Sana Odeh, NYU - "Women in Computing in the Arab World: Representation, Challenges and Opportunities in Academia" and May Al-Dabbagh, NYU - "Mom-preneurs and Tech-preneurs: The Construction of Modern Motherhood and Work in the Gulf"

(5367) Medicine, Life and Death
featuring: Tara Stephan, NYU - "Gender and Class in the Space of the Medieval Cairene Cemetery"

(5150) Modernization, Nation Building, and Indigeneity in Iraq and the Gulf, 1935-1991
featuring: Alex Boodrookas, NYU - "Credit Lines and Color Lines: The Reorientation of Banking Networks in the Persian Gulf, 1940-1965" and Matthew MacLean, NYU - "Property, Indigeneity, and Development in the Northern United Arab Emirates, 1950-1985"

(5161) Palestine, Latin America and the Caribbean: Encounters, Crossings, Parallels, Part I
featuring: Nadim Bawalsa, NYU - "Palestine West of the Andes: A History of the Formation of a Jaaliya"

(5236) The Politics of Art and Culture in the Gulf and Beyond
featuring: Dale Hudson, NYU Abu Dhabi - "Reorienting through Rebranding: Hollywood Film Production in the UAE as Post-oil Investment and Soft Power"

(5241) Memory and Mediation in Lebanon: Commodifying and Consuming Images of the Past
featuring: Jared McCormick, NYU - "Historical Views of Tourism in Lebanon: From Metadata to Interface, ‘A View from the View’"

8:30AM-10:30AM
(5106) Sound, Time, and Space in the Middle East and North Africa
featuring: Ian VanderMeulen, NYU - "Mapping the “Warsh Zone”: Networks of Tajwid Practice in the Precolonial Maghreb" and Hazem Jamjoum, NYU - "When the Music Became ‘Arab’: The Culture-Commodity and the Production of National Space" 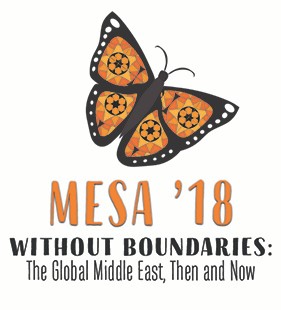 Please note: This event is not sponsored by the Kevorkian Center and it is located out of state.