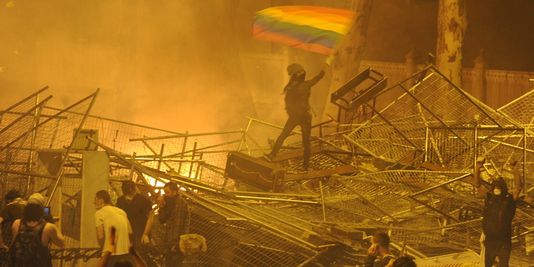 Taxonomies of identity and histories of activism in the U.S and Europe cannot be seamlessly mapped onto other societies. To think of sexual politics, broadly, is to suspend the rubrics of feminist, LGBT, and queer activism, in our attempt to understand how gender and sexuality get politicized both as categories of identity, and as categories of analysis in a particular society. This panel is an invitation to think comparatively about sexual subcultures across South Asia and the Middle East (and specifically in India, Turkey, Israel/Palestine, and Lebanon) ,which we will examine in their opposition to formal authority, their coalitional politics,  their redefinition of social stigmas in political terms, and their re-orientation of the individual towards the social and the collective.

Sara Mourad is an Assistant Professor in the Media Studies program. She works at the intersection of media studies, feminist theory, postcolonial theory, and queer studies. Her current research explores the role of media in the formation and expression of sexual subcultures and identities in postwar Lebanon. It examines gender and sexual non-conformity in television talk shows, literary texts, digital publications, and films to understand the shifting boundaries of publicity in contemporary Arab societies. Sara earned her BA in Political Science at the American University of Beirut and her PhD in Communication at the Annenberg School for Communication at the University of Pennsylvania. Her work has appeared in the International Journal of Communication, theJournal of Communication Inquiry, Critical Studies in Media Communication, and Jadaliyya.

Dr. Sa’ed Atshan is an Assistant Professor of Peace and Conflict Studies at Swarthmore College. He previously served as a postdoctoral fellow in international studies at the Watson Institute for International Studies at Brown University. He earned a joint Ph.D. in anthropology and middle eastern studies and an MA in social anthropology from Harvard University, and a Master in Public Policy (MPP) degree from the Harvard Kennedy School. He received his BA from Swarthmore in 2006. His research interests are at the intersection of peace and conflict studies, the anthropology of policy, critical development studies and gender and sexuality studies. Atshan has been awarded multiple graduate fellowships, including from the National Science Foundation, Social Science Research Council, Woodrow Wilson National Foundation, Andrew Mellon Foundation, and the Jack Kent Cooke Foundation. He is also the recipient of a Soros Fellowship and a Kathryn Davis Fellowship for Peace. He has worked for the American Civil Liberties Union, the UN High Commission on Refugees, Human Rights Watch, Seeds of Peace, the Palestinian Negotiations Affairs Department, and the Government of Dubai. He is Quaker, grew up in Palestine, and is also an LGBTQ rights activist.

Jyoti Puri is Professor of Sociology at Simmons College. She writes and teaches at the crossroads of sociology, sexuality and queer studies, and postcolonial feminist theory. Her book, Sexual States: Governance and the Struggle against the Antisodomy Law in India, was published by Duke University Press (February 2016). Her other publications include Woman, Body, Desire in Post-colonial India (Routledge 1999) and Encountering Nationalism (Blackwell Publishers 2004), as well as articles, book chapters, and journal special issues on sexuality, state, gender, and nationalism. She is currently working on a project on death and migration.

Evren Savcı is Assistant Professor of Women’s, Gender, and Sexuality Studies at Yale University. Savcı’s work on the intersections of language, knowledge, sexual politics, neoliberalism and religion has appeared in Journal of Marriage and the Family, Ethnography, Sexualities, Political Power and Social Theory, Theory & Event, and Journal of Feminist Studies in Religion, and in several edited collections. She has contributed op-eds, blog entries and interviews to Jadaliyya, The Feminist Wire, make/shift, and Middle East Research and Information Project. She is currently finishing her first book Queer in Translation: Sexual Politics under Neoliberal Islam (under contract with DUP), which analyzes sexual politics under contemporary Turkey’s AKP regime. As she wraps up her first book, she is starting a new research project on “failures of Westernization,” analyzing sexual practices that were deemed "uncivilized" and either heavily discouraged or outlawed by the Turkish Republic, such as Islamic matrimony, cousin marriages, arranged marriages and polygamy, yet are still practiced today.