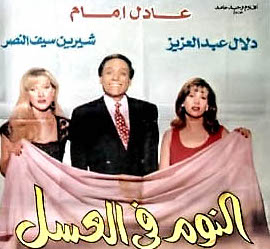 REEL KEVO is a series of favorite films from the Middle East and North Africa curated by the faculty, staff, and students of the Hagop Kevorkian Center.

Synopsis: The sudden impotence of all the men in Cairo becomes a political issue in Sherif Arafa’s amusing satire Al Noum fil 'Asal (Sleeping in Honey).  Magdi (played by comic actor Adel Imam) heads criminal investigations at Cairo police HQ. When a young bridegroom commits suicide on his wedding night and a macho type kills his wife on the same night that hundreds of couples inexplicably beat each other up, Magdi knows he’s faced with a widespread disaster. Much to his wife’s dismay, he too soon becomes a victim of the wave of impotence sweeping the city’s males. Sherif Arafa directed several movies that became iconic in Arab cinema, including the acclaimed 1992 film  Al-irhab wal kabab (Terrorism & Kebab).