La Maison Française is proud to announce the first edition of the “Philo/Piano: The French Touch,” festival which will take place from Tuesday, April 5th to Thursday, April 7th 2022.

Join us for three exciting days of music and talks about the process of creating music for the piano and its relationship to literature.

Pianists, writers, composers, and musicians will come together across different NYU venues to discuss the intersection between music and literature in the French context. The festival offers audiences a beautiful opportunity to experience French piano, from Debussy to Murail, through a whole new perspective.

There will also be a celebration of the music of Poulenc and Boulanger with two performances, a poignant tribute to their visits to La Maison Française in the late 1950s.

**This event will take place in French**

Jean-Pierre Martin, writer and full professor of 20th century literature at the University of Lyon, Mr. Martin is a senior member of the Institut universitaire de France. He was born in Nantes in 1948. Before his career in academia, after May 1968 he worked in factories and as a craftsman for ten years. He is the author of about twenty essays and novels, among them : Henri Michaux (Gallimard, 2003, prize Louis Barthou of Académie française), Queneau losophe (Gallimard, 2011), L’autre vie d’Orwell (Gallimard, 2013), La nouvelle surprise de l’amour (Gallimard, 2016), Le livre des hontes (Le Seuil 2006, Prize of literary critics), Éloge de l’apostat (Le Seuil, 2010), Real book, autopianographie (Le Seuil, 2019). His novel  Mes fous (L’Olivier), was selected for the Goncourt prize and the Medicis Prize in 2020. He has recently published Le  Monde des Martin (L'Olivier, 2022).

Pascale Roze was born in 1954 in Saïgon, Vietnam, where her parents met, her mother being the daughter of a settler and her father a naval officer. She was first an actress and then turned to writing. Her first book is a collection of short stories Histoires Dérangées published in 1994. She won the Goncourt Prize with her first novel, Le Chasseur Zéro. She is particularly interested in the traumas of history in the intimacy of lives. She has conducted writing workshops in prisons and hospitals, but also at the School of Political Sciences in Paris. Since 2018, she has been a jury member of the Medicis Prize.

Marilyn Nonken: Since 2006, she has been Director of Piano Studies at NYU's Steinhardt School, where she is Professor of Music. She has been presented at venues such as Carnegie Hall, Lincoln Center, Miller Theatre, the Guggenheim Museum, Neue Galerie, (le) Poisson Rouge, and Roulette (New York), IRCAM, Reid Hall, and the Théâtre Bouffe du Nord (Paris), the ABC (Melbourne) and conservatories, universities and festivals around the world. A student of David Burge at the Eastman School, Marilyn Nonken received a Ph.D. in musicology from Columbia University. Her monograph The Spectral Piano (Cambridge University Press, 2015) was received as “a screaming success." Identity and Diversity in New Music: The New Complexities ​(Routledge) was published in July 2019. She has written chapters for Perspectives on the Performance of French Piano Music, Messiaen Perspectives, and the forthcoming Messiaen in Context and Oxford Handbook of Spectral Music; served as a guest editor for Contemporary Music Review; and contributed articles to numerous journals. A Steinway artist, Marilyn Nonken has recorded for New World, Mode, Lovely Music, Albany, Metier, Divine Art, Hanging Bell, Harrison House, Innova, CRI, BMOP Sound, New Focus, Kairos, Tzadik, and Bridge. Forthcoming recordings include Morton Feldman's complete works for violoncello and piano, with Stephen Marotto (Mode), and ragtime of Scott Joplin and his collaborators Louis Chauvin, Scott Hayden, Arthur Marshall, and Joseph Lamb (Divine Art).

Register HERE (Open to all)

Born in 1979, François Meïmoun studied at the CNSM de Paris with Michael Levinas, at the Université Sorbonne-Paris IV at the Ecole des Hautes Etudes. His works are performed by many soloists and ensembles (Quatuor Arditti, Quatuor Ardeo, Quatuor Voce, Quatuor Deixis, Alain Billard, Christophe Desjardins, Florian Frère, Chen Halevi, Hélène Tysman, Sébastien Vichard, Ensemble Court-Circuit...) and programmed in French festivals (Musica, festival d'Aix en Provence, Théâtre des Bouffes du Nord, festival de Chambord, les Rencontres de la Prée, Centre Beaubourg, festival de Pâques de Deauville, ProQuartet) and abroad (festival Zeitkunst in Berlin, festival Belo Horizonte in Brazil). He was composer in residence at the Abbaye de la Prée between 2011 and 2012, and at the festival de Chaillol for which he composed Tara, first part of a portrait of Antonin Artaud. He participated to the Atelier opéra en création at the festival d'Aix en Provence in 2013 where his Quatuor à cordes n° 2, untitled – selon pollock is premiered. After the premieres of his Quatuor à cordes n° 3 at the Paris Théâtre des Bouffes du Nord by Quatuor Ardeo and his Quatuor n° 4 for mezzo soprano and string quartet Fragments d’un journal d’enfer by Quatuor Voce, he is currently composing a portrait of Paul Celan and his first opera based on Francis Bacon. In December 2020, he presented the continuation of his portrait of Antonin Artaud for the Ensemble InterContemporain, Le Rite de la nuit noire which was performed at the Cité de la Musique. His music is published by Durand / Universal Classical Music.

Tribute to the piano at La Maison Française

Bénédicte Jourdois was born in Paris, France. She has worked at Marlena Malas’s voice program at the Chautauqua Institution since 2007, at the Castleton Festival since 2011, and Spoleto Festival USA from 2011-13. Jourdois has performed in numerous venues in Europe and in the U.S., including Alice Tully Hall, Carnegie Hall, and the Kennedy Center, and has worked in major North American opera houses such as the Pittsburgh Opera, Philadelphia Opera, and the Houston Grand Opera. She is a faculty member at the Curtis Institute and the Manhattan School of Music. She has worked as a guest coach at the Washington National Opera’s Domingo-Cafritz Young Artist Program. Jourdois holds degrees from Juilliard, the Conservatoire National de Région de Saint-Maur, the Conservatoire National Supérieur de Musique de Lyon, and Mannes College. She is a graduate of the Metropolitan Opera’s Lindemann Young Artist Development Program. She has been a Juilliard faculty member since 2014.

Tribute to the piano at La Maison Française

Marina Chiche follows an international career as a solo violinist, chamber musician and recording artist. With a Doctorate of Arts, four 1st Prizes from the Paris Conservatoire, multiple university degrees in literature and musicology, her versatility and enthusiasm for transmission have led her to develop a unique path as a performer, musicologist, speaker, podcaster, radio host, music educator and author. Sharing her passion for classical music in seminars for Sciences Po school and with the widest possible audience on TV & radio media such as France 3 or France Inter, she has recently released the book Musiciennes de légende, honoring great female musicians of the 19th and 20th centuries. Marina has been selected as a Young Leader of the French-American Foundation, and is an ambassador of the French Touch movement. 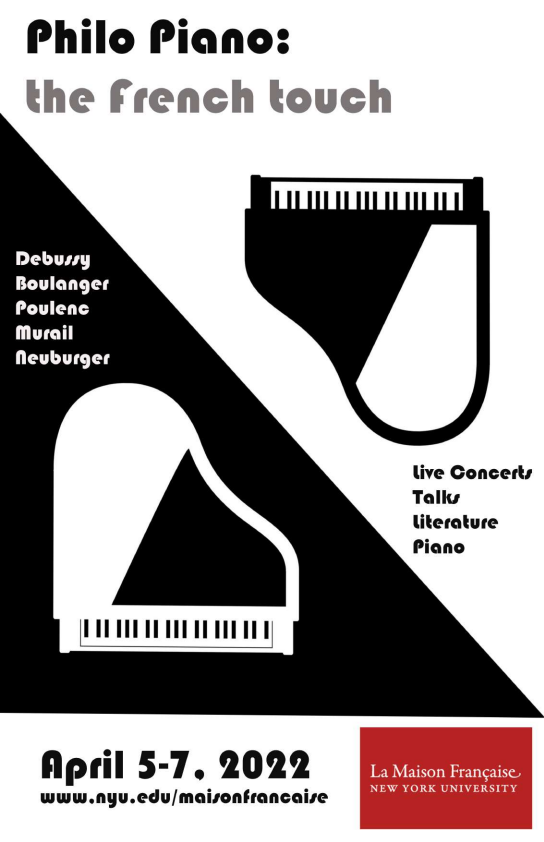 Philo/Piano: The French Touch is made possible with the support of the Cultural Services of the French Embassy in the United States