Catherine E. Clark: Paris and the Cliché of History: The City and Photographs, 1860-1970 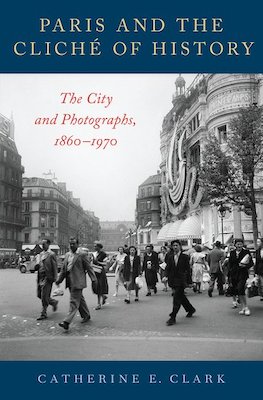 Online event open to all. Please join us at this link. *Please note that you will need to have a Zoom account and be signed in to join the meeting.

Herrick Chapman is Emeritus Professor of History and French Studies at NYU. He works mainly on the social, economic, and political history of twentieth-century France. He is the author of several books, including France’s Long Reconstruction: In Search of the Modern Republic (Harvard University Press, 2018). He was the chair of the 2018-19 Wylie Prize Committee.

Catherine E. Clark is Associate Professor of History and French Studies at the Massachusetts Institute of Technology. She is the author of Paris and the Cliché of History: The City and Photographs, 1860-1970 (Oxford University Press, 2018).

Vinni Datta is Professor of French at Wellesley College. A specialist of 19th- and 20th-century French cultural and intellectual history, she is interested in the relationship of politics and culture, particularly in the formation of national identity. She is the author of Heroes and Legends of Fin-de-Siècle France: Gender, Politics and National Identity (2011) and Birth of a National Icon: The Literary Avant-Garde and the Origins of the Intellectual in France (1999).

Mary Hunter is Associate Professor of Art History & Communication Studies at McGill University. She specializes in 19th-century French art and visual culture. Her book, The Face of Medicine: Visualising Medical Masculinities in late Nineteenth-Century Paris (Manchester University Press, 2016) explores why, how and where the worlds of art and medicine overlapped during the early Third Republic.

Paris and the Cliché of History explores how the history of photography and the history of Paris in the popular imagination became deeply intertwined. Photography shaped the way people came to see their city, even as the continuous compulsion to photograph Paris shaped how photography as an art form and documentary method evolved. Originally dismissed by collectors and historians in the 1860s as “too scientific,” photography eventually came to play a central role in how Parisians gradually learned to see, and to value, Paris as a “museum city,” where the past continued to reside amid an ever-changing and modernizing metropolis. Anticipating the more recent “visual turn” in history, this way of seeing, and thinking about, the past did not come automatically from the city that was there; it came from the construction of collective imaginings that drew heavily from photographs, their preservation and display in museums and libraries, photobooks and photojournalism, popular photo contests and the creation of the Parisian vidéothèque. Paris and the Cliché of History ranges across the history of technology, the institutional and social history of photography, and the study of visual representation and reception.

This event is organized by the Institute of French Studies.