Thomas Piketty: Beyond Hyper-Capitalism. How Ideology Buttresses Inequalities & What to Do About It

Thomas Piketty’s urgent new book, Capital and Ideology (2020), explores the deep roots of social inequalities and advocates for a “participatory socialism” that resists hyper-capitalism. For the New York launch of the book, Piketty will be in conversation with political theorist Nancy Fraser and activist Alexandra Rojas. 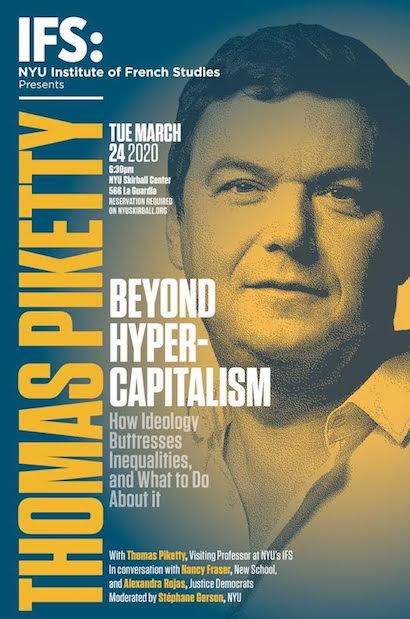 Thomas Piketty is an economist at the Paris School of Economics and the EHESS and a visiting professor at NYU’s Institute of French Studies. His Capital in the Twentieth Century (2013) made a major intervention in debates on patterns of global wealth inequalities.

Nancy Fraser is a leading thinker on social justice, capitalism, and social change. She is the Henry and Louise A. Loeb Professor of Philosophy and Politics at the New School.

Alexandra Rojas is the executive director of Justice Democrats, an organization that supports a new generation of progressive congressional candidates. Selected for the 2019 Time 100 Next list, she appears on CNN as a political commentator.

Stéphane Gerson (moderator) is a historian of modern France and Professor of French, French Studies, and History at NYU. He directs NYU's Institute of French Studies.

Tickets will be available for pick up starting at 4:30pm at the NYU Skirball Box Office on the day of the event. Your RSVP does not guarantee a ticket. Tickets will be distributed on a first-come, first-served basis. Patrons are discouraged from arriving to form a line earlier than 4:30pm. Patrons are able to acquire 2 tickets per person. All tickets are subject to availability.