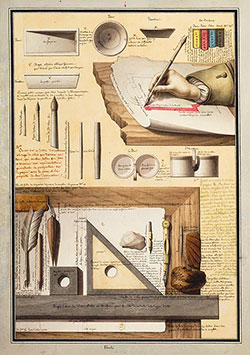 If it were not for his drawings at the Bibliothèque nationale de France, Jean-Jacques Lequeu would be a simple footnote in the history of late eighteenth-century French architecture.  Lequeu’s drawings reflect the way architects of his generation tended to rely more heavily on graphic communication than on textual or theoretical means of expressing their ideas. Lequeu established a specific and original dialogue between text and image that allowed him to question and distort the graphic language set by his colleagues. Join Basile C. Baudez, Assistant Professor at Princeton University, for a presentation contextualizing Lequeu’s production in the history of architectural draftsmanship and to uncover the reasons why he remains one of the most fascinating artists of his time.

Tickets: $20; free for Morgan Members and students with a valid ID. More information on the Morgan's website.

About the exhibition
Jean-Jacques Lequeu: Visionary Architect. Drawings from the Bibliothèque Nationale de France (January 31 to May 10 at the Morgan)
Architect and draftsman Jean-Jacques Lequeu (1757-1826) donated one of the most singular and fascinating graphic oeuvres of his time to the Bibliothèque nationale de France.  Some sixty of these drawings will be on view in the first New York City retrospective to bring significant public and scholarly attention to one of the most imaginative architects of the Enlightenment.

Public programs for Jean-Jacques Lequeu: Visionary Architect. Drawings from the Bibliothèque nationale de France are presented by The Morgan Library and Museum in cooperation with La Maison Française of NYU