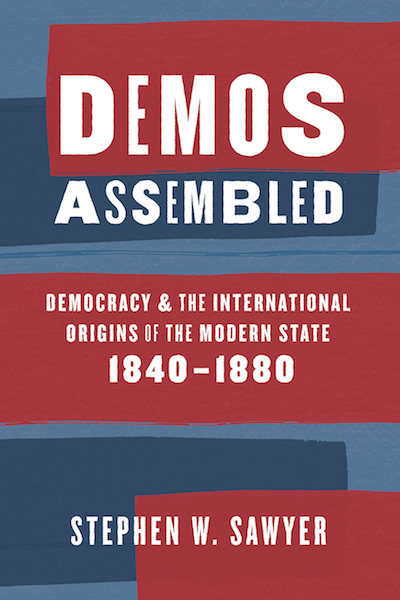 Previous studies have covered in great detail how the modern state slowly emerged from the early Renaissance through the seventeenth century, but we know relatively little about the next great act: the birth and transformation of the modern democratic state. Demos Assembled (University of Chicago Press, 2018) provides us with a fresh, transatlantic understanding of that political order’s genesis, and sheds new light on the subsequent reciprocal influence that American thinkers and politicians had on the establishment of post-revolutionary regimes in France. Sawyer argues that the emergence of the stable Third Republic (1870–1940), which is typically said to have been driven by idiosyncratic internal factors, was in fact a deeply transnational, dynamic phenomenon.

With Stephen W. Sawyer, professor and chair of history, and director of the Center for Critical Democracy Studies at the American University of Paris, editor of the Tocqueville Review and associate editor of the Annales. History and Social Sciences. Chaired by Stéphane Gerson (French and French Studies, NYU). Comments by Edward Berenson (History and French Studies, NYU), Arthur Goldhammer (Center for European Studies, Harvard University), Jennifer Pitts (Political Science, University of Chicago), and Sophia Rosenfeld (History, University of Pennsylvania).

Co-sponsored by Institute of French Studies, Center for European and Mediterranean Studies, Department of History, and Remarque Institute