Join host Randy Cohen – author and broadcaster – for a special live taping of his podcast Person Place Thing. Guests talk about one person, one place, and one thing important to them. The result? Surprising stories from great talkers. 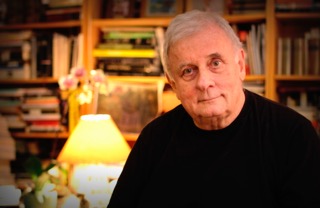 Edmund White has written some twenty-five books and edited several anthologies. He is perhaps best known for his biography of French writer Jean Genet, for which he won the National Book Critics Circle Award. He is also the author of a trilogy of autobiographical novels—A Boy’s Own Story, The Beautiful Room is Empty, and The Farewell Symphony. His novel, The Married Man, takes place in France, the United States, and Morocco and deals with the intimate psychological repercussions of AIDS. He has written brief lives of Marcel Proust and Arthur Rimbaud and a book about unconventional Paris called The Flaneur. His most recent published works of fiction are Hotel de Dream, Jack Holmes and His Friend, and Our Young Man. His memoir, Inside a Pearl: My Years in Paris, came out in 2014 and a new memoir, The Unpunished Vice: A Life of Reading, will be published in June. White was named the official author for the State of New York. He is a member of the American Academy of Arts and Letters, an officer in the French Order of Arts and Letters, and winner of the France-Amérique award, Mondello prize in Sicily, and 2018 PEN/Saul Bellow Award for Career Achievement in American Fiction. He has taught writing at Princeton and lives in New York City.

Before writing The New York Times Magazine weekly column "The Ethicist," Randy Cohen wrote humor pieces, essays, and stories for The New Yorker, Harpers, and the Atlantic. He won four Emmys for his television writing. His book, Be Good: How to Navigate the Ethics of Everything, was published in 2013.

The live event includes music by Rich Jenkins.  The program will be recorded for later broadcast on public radio throughout the Northeast (WNYE, 91.5 FM in NYC).