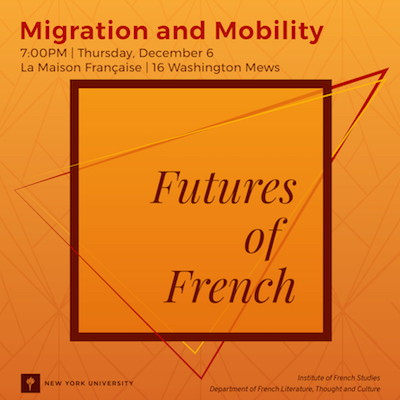 Morgane Cadieu is Assistant Professor of French at Yale University. She specializes in 20th and 21st century prose, randomness in literature and philosophy, space studies and materialism. The manuscript of her first book on Georges Perec, Samuel Beckett, Anne Garréta, Italo Calvino and Sophie Calle is called Marcher au hasard: déterminisme, clinamen et libre-arbitre en littérature au XXème siècle. In this work, she maps out the spatialization of chance; traces the genealogy of the atomist swerve; and shows how the authors of her corpus construct a new type of urban strolling.

Minayo Nasiali is Associate Professor of History at UCLA. Her first book, Native to the Republic: Empire, Social Citizenship, and Everyday Life in Marseille since 1945 (Cornell University Press, 2016), examines the politics of everyday life in Marseille neighborhoods and shows how common-sense perceptions of ethnic and social difference have shaped the late-modern French welfare state. Her new project is a history of shipping in the twentieth century and explores the movement of people, goods, and ideas within the French empire.

Tony Haouam is a 3rd-year doctoral student in French and French Studies at NYU.

Co-sponsored by Institute of French Studies and Department of French Literature, Thought, and Culture