in conversation with Olivier Barrot

The last “French Literature in the Making” session of the spring 2018 season is dedicated to Professor Tom Bishop and to his devotion to the art of the theater throughout his academic career.

Following the discussion with Olivier Barrot, Christophe Barbier will perform a segment of his one-man-show, Le Tour du théâtre en 80 minutes, which recently had a great success at the Théâtre de Poche in Montparnasse. 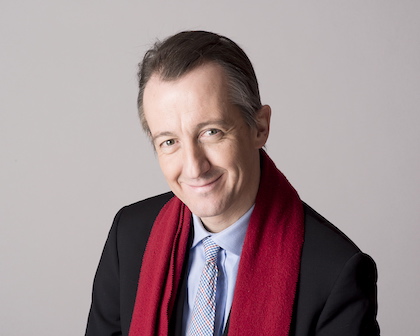 Christophe Barbier provides a unique perspective on theater and politics. A major voice in French politics for over 30 years, he began his career as a political reporter at Le Point and on Europe 1 before becoming political editor at L’Express in 1996. He was editorial director from 2006 to 2016, and remains a member of the editorial team. He hosted the morning news program on the Canal+ digital news channel I-Télé since 2011, before joining BFM-TV in 2016.

Barbier has directed over 60 plays and recently performed the one-man-show Le Tour du Théâtre en 80 minutes at the Théâtre de Poche Montparnasse. Barbier is the director of the Théâtre de l’Archicube, the theater company of his alma mater, the École Normale Supérieure.

Olivier Barrot is a journalist, author, and television personality who plays a prominent role in French cultural life. He hosts the daily literary program « Un livre un jour » on France 3 and TV5 television and directs a series of public discussions with actors of the Comédie Française on the art of their profession. His most recent books are United States; Mitteleuropa; Un livre un jour, un livre toujours; La Revue blanche; Le Fils perdu; Ciné Club; and L'Ami posthume. He has been hosting French Literature in the Making at New York University since 2007.