The principal research interest of the Hamilton group is in the field of molecular recognition and its application to problems in organic and biological chemistry.

The Hamilton group's early work focused on controlling intermolecular interactions through precisely positioned hydrogen bonding groups. The first excursion into this area came through studies on the antibiotic vancomycin. The Hamilton group was the first to design molecules with shapes and hydrogen bonding patterns based on the natural antibiotic that were able to complex carboxylate derivatives in a similar manner. The search for simple solutions to the vancomycin problem led them to develop a family of aminopyridine and related derivatives as host molecules for a range of target substrates. These advances included the synthesis of receptors for barbiturates, carboxylic acids, nucleotide bases, flavins, phosphodiesters, carbohydrates and amino acids. The precise detail with which these recognition interactions could be analyzed both in solution and the solid state led to new insights into the role of hydrogen bonding and p-stacking interactions in molecular recognition. These studies on hydrogen bonding and p-stacking form the basis of another important area in the Hamilton group 's work, namely the design of artificial enzymes. Using the cis-trans isomerization of acylproline as a model, Hamilton's group demonstrated that synthetic receptors could selectively complex one isomer in a conformational equilibrium. Later work showed that selectivity for high-energy intermediates or transition states on a reaction pathway can be built into synthetic receptors. Using this strategy The Hamilton group has shown large accelerations in a number of reactions important in both organic and biological chemistry, including the Diels-Alder reaction, phosphate ester hydrolysis, and transacylation, as well as photoinduced energy transfer in multichromophore aggregates.

A major recent area of research for the Hamilton group focuses on the design of synthetic agents that bind and recognize the exterior surfaces of proteins. In particular, they have shown that hydrophobic interactions can be used to stabilize a-helices and by designing non-peptidic oligomers (foldamers) that fold into extended sheet or helical conformations. The group has further demonstrated that small synthetic receptors that complement the functional groups on an a-helix surface can bind in a sequence and secondary structure selective fashion. A new class of synthetic receptors based on the multiple peptide loop structure of antibody combining sites has been prepared and shown not only to bind strongly to protein surfaces but also to block their interaction with both chemical reagents and their natural protein partners. This has led to a new concept in enzyme inhibitor design in which the exterior of the protein instead of the active site is targeted and a new family of potent antiproliferative agents that block the interaction of growth factors with their cell surface receptors in animal models of human cancer. 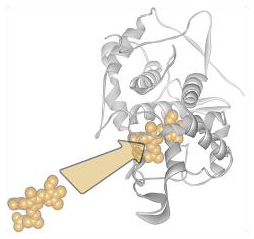 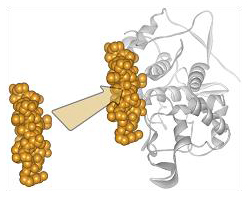 This fundamental investigation of protein surface recognition has now expanded into a major new program aimed at determining the structural requirements for disrupting protein-protein interactions. Several novel scaffold designs using porphyrins, cyclic amides and terphenyls have been shown to bind with high affinity and selectivity to various protein targets. The terphenyl series is noteworthy as it represents the first example of proteomimetic, synthetic compounds that mimic regions of protein secondary structure such as alpha-helices. These various protein binding agents are revealing new arenas of biological chemistry centered on protein-protein disruption, sensing and remarkable room temperature and stoichiometric denaturation of proteins.

A functionalized porphyrin molecule capable of binding a protein surface 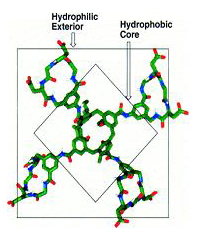 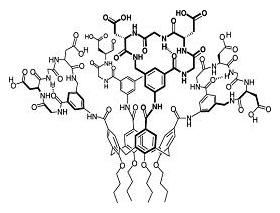 A substituted terphenyl being used to mimic an alpha helix 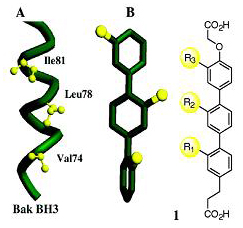 Controlling Cell Signaling in vitro and in vivo

Building on principles of controlled intermolecular interactions learned in the synthetic receptor field, the Hamilton group has developed a range of molecules that bind selectively to biological targets and influence cellular processes in vivo. This work is having an important impact not only in our understanding of key cellular processes but also in the development of novel approaches for treating cancer as well as certain parasitic diseases. In collaboration with the group of Said Sebti at the Moffitt Cancer Center in Tampa, they have targeted key proteins involved in cellular signal transduction pathways. The group was among the first to show that carefully designed peptidomimetics could bind and inhibit the enzyme protein farnesyltransferase. This enzyme is essential for mediating the cell signaling function of the GTPase Ras. Since mutated Ras is found in 30% of human cancers, its function has become a major target in the field of anticancer chemistry. The Hamilton/Sebti groups were among the first to show that farnesyltransferase inhibitors could block Ras function in whole cells and inhibit the growth of human tumor cells in nude mice models. The use of these agents as molecular probes of cellular function has led to many important insights into the complex process of cell signaling, including receptor tyrosine kinase activation and GTPase function. The Hamilton/Sebti groups were also the first to design inhibitors for the related prenyltransferase enzyme, geranylgeranyltransferase-I. These, in turn, have led to a new understanding of the role geranylgeranylation in such cellular processes as the G1 to S phase transition in the cell cycle and the induction of nitric oxide synthase. Most recently this work has been extended to key protein targets within parasitic organisms and has led (in collaboration with the groups of Wes van Voorhis and Mike Gelb in Seattle) to potential new approaches for treating malaria and African sleeping sickness.

Self-Assembly in Solution and the Solid State

The Hamilton group has also made contributions to the area of solid-state engineering. Using the principles of hydrogen bonding, p-stacking and electrostatic complementarity developed in solution studies, the group has published a series of papers aimed at controlled assembly of aggregates in the solid state as well as in solution. The group has made a number of contributions to the area of self-assembly with the design, synthesis and characterization of several well-defined aggregates in solution. These include several new classes of organogelators one of which has the unique property of gelling supercritical carbon dioxide. This work was extended to the novel concept of "self-assembling receptors" in which individual binding groups are recruited around a metal center. Most recently, they have shown that functionalized gels and designed foldamers can recognize specific faces of growing crystals and influence their size and morphology.