Ursula Fricker was born in 1965 in the Swiss town of Schaffhausen. She trained as a social worker and taught theatre studies. Her first novel, Fliehende Wasser (Fleeing Water) was awarded the prize for single best work by the Swiss Schiller Foundation in 2014 as well as a year’s writer-residency by the City of Zürich. In 2009 she published Das letzte Bild (The last Image), and in 2012 Ausser sich (Frantic), which was nominated for the Swiss Book Prize. Lügen von gestern und heute (Past and Present Lies) was awarded the Brandenburgischen Kunstföderpreis in 2017.

For the Festival Neue Literatur 2018, Ursula Fricker participated in the events "Words with Writers," "The Lives of Others: Stories from Outside Our Bubble," and "The Author's Voice." 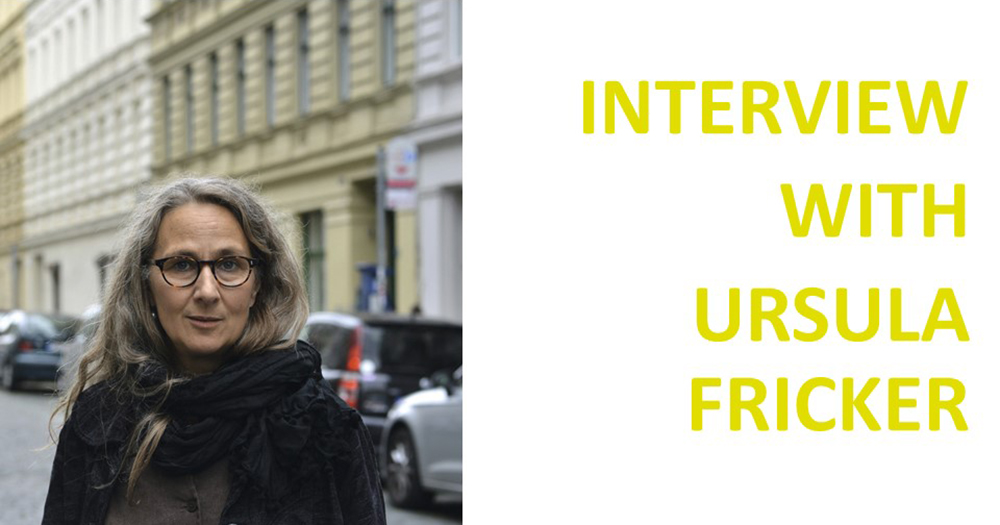 1. When did you know you wanted to become an author?

This was more of a subtle process than a decision. I´ve always read a lot. I remember that once when I was about twelve or maybe thirteen, I asked myself how it would be to write a novel and thought that it must be incredibly difficult. My origin is a working-class family without much of an affinity to the idea of making a living out of art. Nevertheless, bit by bit, I made a living out of art. Writing became my place to be.

I need long term empty periods of time. Full schedules make me sick. I need a room for myself. It’s a bit sad to say and also a cliché, but my most productive inspiration seems to come out of a certain discontent, discomfort, and doubt about political or social development – an impulse of contradiction.

3. You were born in Switzerland, but you moved to Germany following the fall of the Berlin Wall. Which of these two countries do you now consider home, and has this in any way shaped how you view the world (and render it in your novels)?

First, home is where I am. But of course, Brandenburg/Berlin, where I’ve lived for almost thirty years now, has become home. Home contains the Brandenburg landscape, which I admire a lot: mostly unspoiled, original plains and endless woods, wide and wild. In that sense, I am an old romantic, although I also love huge chaotic cities, majestic architecture, industrial sites, bridges, and human formed landscapes. In a way, of course, I am a migrant – of free will. While I’ve assimilated into Eastern Germany, I still feel a sense of belonging to Swiss society…not so much in national terms, but rather in terms of the mentality and way of thinking.

I can´t say whether the experience of migration has shaped my way of writing, because I just don´t know how it would have been otherwise. What my life and writing may shape is a certain urge and passion to start anew, which is a blessing and curse in one.

4. Your fourth novel, Past and Present Lies, is set against the background of the current refugee crisis and tackles contemporary subjects head on. What special powers does fiction have to help us understand and confront the world today, and what overarching message were you hoping to communicate with this book?

Well, the novel was actually written before the current, what we call, refugee crisis in Europe occurred. I started research in 2011/12 and finished writing in the summer of 2015. The setting tackles a very special issue we had in Berlin throughout this time: an activist/refugee camp in a small park in the city. And we had a local government who accepted the occupation as an expression of comprehensible protest. The narration is built around this situation. There are three characters: an activist, a migrant, and an interior senator (Innensenator). It was essential for me to draw three more or less understandable views on the same issue.

Since 2015, the debate has been heating up. My novel came out just at the peak of the so-called “welcoming culture” (Willkommenskultur) in Germany during the spring of 2016. Since not all characters in the novel empathize with the refugees, some blogs and newspapers (if they reviewed the book at all) accused it of being “politically dangerous”…whatever that means. When I wrote the novel, I had a quite naïve intention. I wanted to open the window and see what’s happening. Empathy, I think, is a very valuable thing, and should not be misused to comfortably confirm the side we sympathize with and deny or exclude all other perspectives. The result would be, I believe, a very restrictive and illiberal way of thinking.

For example, I´ve set the character of Interior Senator Otten not the way everybody would expect. In my novel, the “bad guy” is a decent human being. Readers find themselves, maybe against their will, understanding the thoughts and arguments of a conservative politician. Can you do that, everybody would ask. If literature has a power, what else could that be but to allow us to slip into the mind of somebody else, someone who may even be the opposite of us. This, of course, is also quite delicate and raises the question of who is worth being understood. Is there a red line? These are interesting questions that are important to discuss.

5. You will be presenting Past and Present Lies at the annual Festival Neue Literatur in New York, where the theme this year is INSIDER | OUTSIDER.  Could you reflect on this theme in regards to your novel, and your novel’s main characters Beba, Isa, and Otten?

It’s all about insider/outsider in the novel, it is actually one of the main subjects! The leftist group around Isa, the activist, is loudly claiming for inclusion. But in real life, they are drawing a sharp line between insiders and outsiders. Interior Senator Otten dealt with the same issue in his youth. This has marked him for life and shapes his action today. Beba as a migrant and prostitute is a clear outsider, but feels like an insider. Some wished that she would have been more vulnerable, but she is an unconventional, willful character, not a victim. And sometimes, outsiders become insiders very quietly and draw new lines of segregation.

I´ve visited New York several times before. The first time was in 1987, when I stayed in Queens in a kind of commune, together with a bunch of Irish expats for almost four months. Fun times!

Everything is quite different now. Safer. Cleaner. Less crazy. But New York is still overwhelming in so many ways.

I have to focus quite strictly on the current project, my next novel, which is just about to be finished. But since I mainly work in the very early mornings, I allow myself to stroll around in the afternoons. I love observing the street life, discovering outlying parts of the city, and marveling at the architecture. I also go to museums, exhibitions, and concerts now and then.