Stefan Falke is a German born photographer who lives in New York City and works for international magazines, film studios and corporate clients. He has published two books: MOKO JUMBIES: The Dancing Spirits of Trinidad, about a stilt walking school in Trinidad, and LA FRONTERA, for which he photographed 200 artists on both sides of the entire 2000 miles long U.S.-Mexico border to document the vibrant cultural activities in that region.

For information on the opening of Stefan Falke's exhibition "MOKO JUMBIES: The Dancing Spirits of Trinidad," please click here. 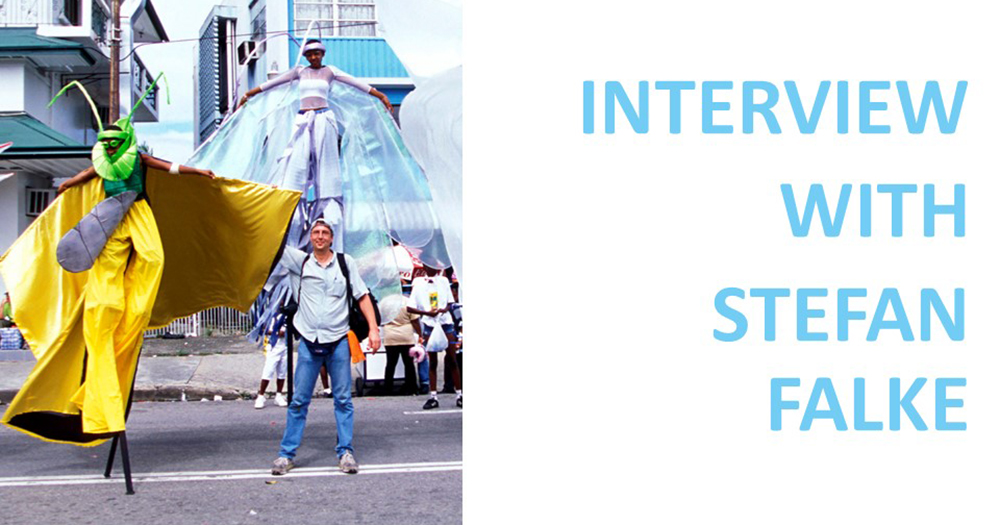 1. Let’s begin with some background information. How did this photography project come about? How did you hear about the Keylemanjahro School in Trinidad? What exactly is the “Moko Jumbie” tradition being taught there?

I was traveling to Trinidad & Tobago for many years to photograph the sculptures of German artist Luise Kimme, who had her studio in Tobago. One day she introduced me to the world famous Trinidadian artist Peter Minshall, who at the time used a group of Moko Jumbies from the Dragon Keylemanjahro School of Arts & Culture for one of his massive Carnival bands, that could be 5000 people strong and would parade through the streets of Port of Spain during the festivities, all in those amazing costumes created by Peter Minshall.  I met them at his ‘Mas Camp’, the workshop where his art was being produced and dancers practiced, and a 7 year-long obsessive photography project was born.

2. As a German photographer based in New York, how did you approach the task of portraying communities other than your own without lapsing into Exoticism?

I was interested in the shapes and forms of the Moko Jumbies (all children and young adults), their endless abilities to perform dances and acrobatics on stilts, and their amazing energy – they perform on stilts during carnival from dawn to dusk, up to 12 hours – and the spiritual transformation they all seem to go through as soon as they got on their stilts. It was both a wonderful visual and spiritual experience watching them dance near the sky. I never thought of anything else but to follow my instincts and to photograph them. I have traveled a lot; I don’t know what “exotic” is, I don’t care much about the word.

3. Can you tell us a bit more about your daily experience taking these photographs? What types of personal relationships did you develop with the school’s founder, Glen “Dragon” de Souza, and students?

Glen “Dragon” de Souza became a very good friend. He allowed me to photograph the Moko Jumbies in his school yard and join them for the many parades during Carnival and many other events. I would spend weeks without end with them, every day. They looked at me as somebody slightly crazy, I guess. I would shoot pictures every minute of the day. I didn’t do much else in Trinidad. I could not risk to miss anything at the school. I was in my element! I had found my visual home. I miss it!

4. You spent six years documenting this school. Did you plan to take that much time initially? What artistic reasons made you return there repeatedly? What are the advantages of continuing a photography project over such a long span of time?

It was probably closer to 7 years, 3-4 visits a year, sometimes 2-3 weeks. I could not find an end, but the nearing publication of the book in 2014 (MOKO JUMBIES: The Dancing Spirits of Trinidad) marked my finishing line. I did not think of anything at the beginning, neither time nor the result was on my mind. I was simply hooked. When I realized that I was totally accepted by the group—I became a part of the school, somebody who would just be there at all times, much like a piece of lasting furniture—I just stayed, or kept coming back. The opportunities for great pictures were endless. So was my continuous excitement about the kids, their talents, and their energy! I really loved it there.

The advantage of such a long term project – this one just kept growing – is that the work keeps getting better because I am practicing my craft every day on the same subject. I am not noticed anymore, which is a way I like to work. I am the observer. I don’t like to be observed, or even noticed. What made me want to come back year after year were also the changing costumes. The Moko Jumbie is very impressive as is. But when amazing artists like Peter Minshall and Laura Anderson Barbata start to dress them in fantastic costume creations, the Moko Jumbie transforms again and morphs into his or her garment. They make the costume work, breathe life into it. Seeing a performance of an experienced Moko Jumbie in, let’s say, a huge bat costume is something unforgettable. This is where the Moko Jumbie meets art, and makes it work.

5. De Souza said that there were two main goals of founding the school: to preserve West African traditions and to keep kids away from drugs and crime. What types of lessons might we draw from the Keylemanjahro School about the importance of culture in general?

We learn that arts and culture works!! Pride in arts and culture works! Working for arts and culture works! These kids have no negative thoughts while practicing their arts and one can see their pride being up in the sky, dancing. Drugs and crime are a problem in Trinidad like they are almost everywhere, but chances are that people, young and old, are better off in life when there is a purpose, which this school is giving these children and young adults. Becoming a Moko Jumbie also means learning how to be social: without helping each other, this activity is impossible. This school had up to 100 students (afternoons, after regular school, by the way) in the yard. The stilts are all made right there by Dragon and his students. Drumming and uni-cycling are being practiced there too.

6. Laura Anderson Barbata will be speaking with you at the exhibition opening at Deutsches Haus on February 12. How did you get to know her and what did your collaboration look like? What was her role in this project?

Laura’s work with the school was a wonderful surprise for me. I was shooting pictures at the school for a few years already when she started creating costumes for them. She worked on a social art project and brought the group up to another visual level. The Moko Jumbies won many of the prestigious prizes during Carnival parades wearing her amazing works of art. Today, she continues to work with stilt-walkers in the U.S. and Mexico and her work is included in many museum collections. A good part of my pictures in the exhibition and the pages of my book are showing her art, masterly presented by the Moko Jumbies of the Dragon Keylemanjahro School of Arts & Culture, or the dancing spirits of Trinidad!