Regina Baumhauer was born in Schwäbisch Gmünd, Germany. Following a scholarship year at Boston University (1986–87), Regina Baumhauer graduated from The Staatliche Akademie der Bildenden Künste in Stuttgart (1988) where she was granted The Aufbaustudium for Painting (1988–90). Regina Baumhauer completed 12 permanent installations for art in architecture and building projects in Germany, has received international grants and awards, such as the Innovationsfonds Baden-Württemberg, the Dietenberger Mahringer Stiftung, Kunst für Brüssel Prize, and the Patricia Highsmith-Plangman Residency. Her works are included in many prestigious public and corporate collections. Four of her publications are dedicated to the “Open Letter Series": Open Letters, 2006 (Edition SüdWest), Open Letter, 2012 (exhibition catalogue), Little Miss Liberty Crossing the Delaware, 2016 (Museum im Prediger, Schwäbisch Gmünd, Germany), and Die Weisse Rose—IN MEMORIAM PRESENTE, 1942/43–2017/18, 2017 (exhibition catalogue). Regina Baumhauer has made a name for herself with exhibits in museums and galleries in Germany and the United States since the mid-1980s. 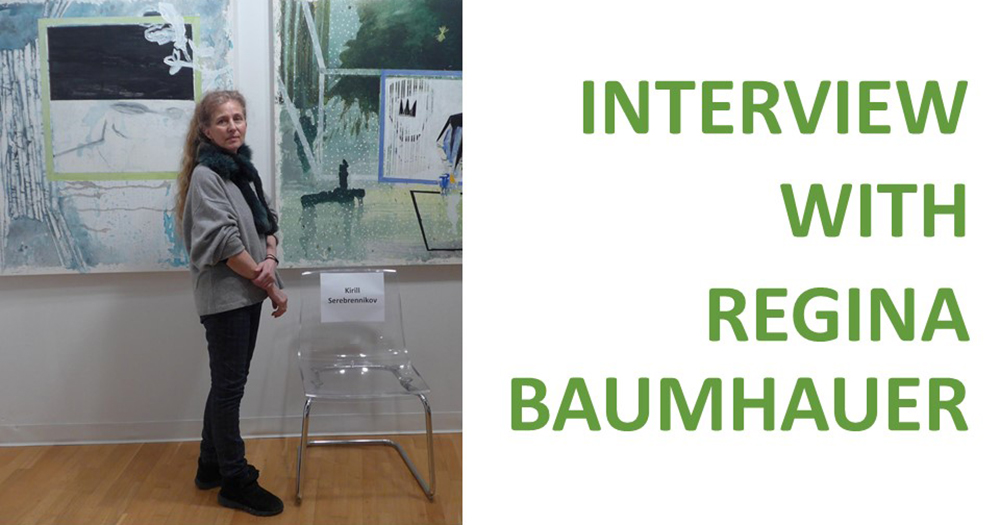 1. Your exhibition “Open Letters, Die Weisse Rose & Liberty Under Attack” depicts and is dedicated to members of The White Rose resistance group, which called for active resistance to the Nazi regime in 1942 and ’43. When did you begin working on this series of paintings and did current events lead you to reflect back on this inspiring chapter in German history?

I started working on the paintings in the summer of 2015. Nevertheless, I conceived of the idea for these works of art many years before I even knew that I would become a visual artist. In high school, when we learned about the darkest of times in German history, I felt that the heroes who righteously resisted the Nazis must not be forgotten. I believe it is essential to reflect back on history. Goethe said that “you only see what you know.” The only chance we have is to learn from the past, acknowledge the world as global, and, by doing so, conquer the future.

2. The paintings in this series, as well as many of your previous series, are called “Open Letters.” In what way are the paintings letters? In what sense are they open?

All the paintings I have created since 1993/94 are called “Open Letters.” Back then, it suddenly occurred to me that the way we communicate and live has changed forever. Information can be shared worldwide within seconds. We are now available 24/7. The changes become faster and faster every day, which has both positive and negative consequences. But is humankind ready for the “Brave New World” it has created?

Clare Rothschild said that “envelopes, like art, carry messages.” Only a relevant piece of art has the power to carry messages, touch the viewer, and become a real open letter. When the “Open Letters” leave my studio and appear in a public presentation, the circle of communication is closed and expanded.

3. Can you tell us about your artistic process in creating these paintings? How do you go about visually portraying a historical figure or event? To what extent are these paintings portraits?

When my interest is sparked, I’m keen to know more. I then start reading and researching and let the information sink in. I allow myself to forget about it, sometimes for months or even years. When something re-ignites my interest, I’m ready to finally ‘see’ what I ‘know’ by searching through my memory. The time in between my initial gathering of information and when I begin painting allows me to produce a personal, obscure, and often removed image of reality: a painting of a “persona” rather than a “person” emerges.

4. The newest work on display, “Open Letter, Feuerle im Zauberwald” pays homage to the acclaimed and provocative Russian theater and film director Kirill Serebrennikov, an outspoken Kremlin critic currently under house arrest. What are the similarities between him and the members of the White Rose?

I have neither met any of the members of the White Rose nor have I ever met Kirill Serebrennikov. Still, the actions of each of these people have touched me. They all dared to have a critical view of the world and communicated this in a non-violent way. The personas who appear in the frames in my paintings have, in fact, been framed in the sense of being made to appear guilty. They all had to pay for their actions.

5. While the subject of these paintings is historical, the themes evoked - liberty, resistance to tyranny, respect of human dignity - are timeless issues that are particularly relevant today. In your view, what lessons does the White Rose offer us in 2018?

On the last page of Vier Zeiten: Erinnerungen by Richard von Weizsäcker, the former President of Germany, you will find a political statement that is also a sort of testament to draw inspiration from the White Rose. So let’s never forget the noble acts of the brave young students of the White Rose. For Sophie Scholl it was important to not only be sharp, but also to have a big heart. What could possibly be added to these thoughts?!