Norbert Niemann, born 1961, is an author based in Munich and Chiemsee. His most recent novels are Willkommen neue Träume (2008) and Die Einzigen (2014). Niemann received the Ingeborg-Bachmann-Prize (1997), the Carl-Amery-Prize (2015), the Music Theatre Now Award for Musicophilia, a stage version based on Oliver Sacks’ book (2016), and the German Literaturfonds’ New York Stipend (2016). His essay Erschütterung. Literatur und Globalisierung unter dem Diktat von Markt und Macht appeared as a part of the series “Einsichten“ by Alfred Kröner Publishing in May 2017. 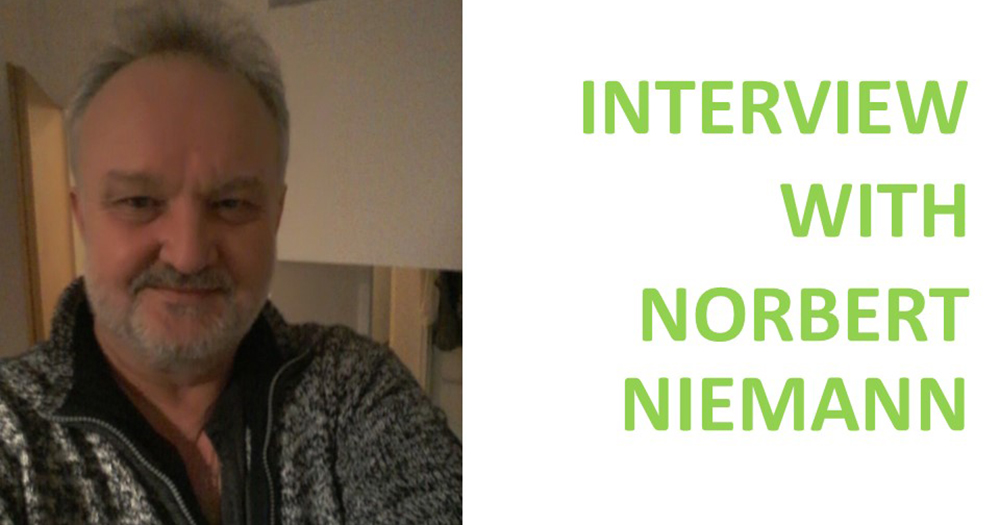 1. Throughout your career as a writer, you have written works of fiction as well as non-fiction books about politics, society, literary theory, and art.  How do you decide whether to address a topic through fiction or non-fiction?

It’s more a question of necessity than of decision. Mostly it depends on actual political, social and cultural developments in society. Germany is known as the home of “Dichter und Denker” [poets and thinkers], and I always defined myself as a Dichter AND a Denker. To close the cardinal gap between reality and thinking, present time and language, sometimes it’s necessary to approach this gap in a more rational or philosophical way, sometimes with fictional structures. Fiction and non-fiction are different forms of awareness. Fiction shows both writers and readers how it is to be someone else who lives under different (or even lives differently under similar) circumstances. Especially the novel is a place for what Robert Musil called “Möglichkeitsform.” Fiction goes on where non-fiction has to stop. But also the other way around: non-fiction becomes essential when fiction starts becoming false.

All I can say is that I’m NOT ABLE to write in subways or buses, at marriages, in concert halls or jazz clubs, but I have no favorite places, except a special calm and lucid place inside of me. My inspiration comes from that never-ending doubt about the real dynamics of our present time. I have no language for it. Nobody has it. I would like to find this language, which is constantly lost. I want to think, to “speak” it. This is my idea of the task of a writer.

3. How did you become a writer? Have you always known you wanted to pursue that career?

In my first life I was a musician and composer, and when I was a young man I thought I would continue for the rest of my days. But in the early 80s, I sang and played guitar in a New Wave Band and began writing lyrics for our songs. When I recognized that pop music became more and more a pure business thing and that there is no longer a way out of all these growing commercial structures, I left this kind of stage forever and started to write prose.

4. Has your musical past influenced your writing?

Of course, the influence is immense. Especially in my last novel that tells the story of Marlene Krahl, an experimental electronic composer, I’ve tried to bring music and literature together as near as possible. I generally think that there are two types of writers (and even moviemakers): one is guided primarily by musical structures, the other by visual structures. But music is no language, as Oswald Wiener, the famous head of the Austrian “Wiener Gruppe,” said. The relationship between literature and music is a complex act of transformation. Exactly this act inspires me. How can I say what music sounds about?

5. We understand you’re a member of the PEN-Zentrum Deutschland. Could you explain what that means exactly? Does it involve specific responsibilities? How do you become a member?

The PEN is an important organization, especially for foreign political affairs. It advocates for persecuted writers around the world. With its writers-in-prison program, it takes care of imprisoned authors. It also has a number of asylum apartments in Germany. Its voice on domestic issues, however, is currently weak. You become a member by proposing two members for election.

It’s my first time in New York, but not my first time in the U.S. About fifteen years ago I visited Los Angeles with Thomas Meinecke and Nobel Prize Winner Herta Müller for a German-American writers meeting. I can’t say yet whether there are any differences with my former visit, I just arrived here a little over a week ago. I’ve expected something like signs of the new Trump-America. So far, I haven’t found them. Perhaps New York—this huge, obviously quite well-functioning migrant product—is also the wrong place for it.

I want to see and hear as much as possible in New York. Maybe I’ll write a few small texts about my impressions for “Freitext” on “ZEIT online”. Another thing I have to do this year is write an essay for the “Punctum” series at Matthes & Seitz with the working title “The Responsibility of the Writer and his Allies”. Last but not least, I want to start a new novel, but I cannot give you any information about it yet. I hope I have enough time and power with all my heart to do both: enjoy NYC and do my work.

8. Would you say you are particularly influenced by a specific author and, if so, how? May we ask what you are reading at the moment?

Not just one specific author, but a huge number of authors! However, the older I get and the longer I write, the more the role models fade into the background. They become like colleagues and reading their work becomes a dialogue, whether they are still alive or have already died.

9. In your most recent book Erschütterungen, you examine how economic and digital globalization are reflected in international contemporary writing. What inspired you to write this book? How did you select the authors you included?

There are two aspects. First, my experiences as a reader showed me that authors all over the world write about similar social and cultural phenomena of this new time with comparable literary expressions. Second, I couldn’t find anything to read about it! Soon I thought that this fact may also be related to the ideology of the pure market. So it was a kind of fight against this ideology. I have tried to counter commercial thinking, which destroys sociocultural structures, with a form of cultural thought that both recognizes and creates life-relations. In this respect the book is politically motivated. My selection of authors had no scientific approach. It follows the traces of a reader who is passionate about the texts of his contemporary colleagues after their lived and written present. Or, as I wrote in the introduction: the book “is not written out of the methodically secure viewpoint of a scientist, but from a writer who assures himself of the literary orchestra in which he himself is an instrumentalist among many, and who wants to try out how this orchestra might sound in harmony when it is not directed by a conductor appointed from the market.”