Levin Westermann was born in 1980 in Meerbusch and studied at the Goethe-Universität in Frankfurt am Main as well as at the Hochschule der Künste in Bern. He has published three poetry collections, unbekannt verzogen (address unknown) in 2012, 3511 Zwetajewa (3511 Tsvetaeva) in 2017, and bezüglich der schatten (with reference to shadows) in 2019. Westermann’s texts have appeared in anthologies and journals like EDIT, manuskripte and Sprache im technischen Zeitalter. 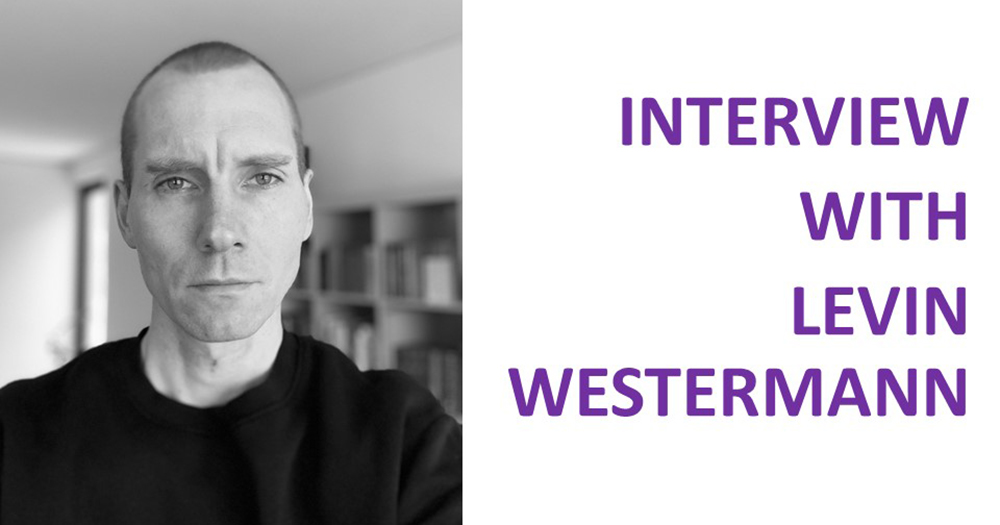 1. When did you realize you wanted to become a poet? What inspired you to write your first poetry collection unbekannt verzogen?

I’ve read about writers who said at a very early age, "I’m going to be a poet!“, but I never had such a moment as a child. I just always loved to read. I didn’t start showing my poems to other people until I was in my late 20s. All of my texts up to that point went straight into 1) the Schublade (drawer) or 2) the trash can. I started writing the poems of my first poetry collection when I was an undergraduate at the Bern University of the Arts. At that point in my life I finally felt ready to tackle the issues of grief and loss that I had been dealing with for over a decade.

2. Please tell us a little bit about your writing process: how do you collect ideas, thoughts and inspirations and how do you bring them to paper?

I read a lot. I’m a firm believer in the idea that literature begets literature. I also believe that you need to be alone for long stretches in order to concentrate and to think about what you have read (in books) and experienced (in the world). Because all of that "stuff“ accumulates inside yourself, and you have to pay close attention to it. At least that’s how it works for me: I need to shut up and listen. That’s where my poems begin. It’s a slow process, and I’m a slow writer. Other than that, I’m always carrying a notebook with me to write down whatever I find interesting. Whether that’s an excerpt from an article in the New Yorker, or a poem by CAConrad, or Cardi B asking on Twitter, "What color should I wrap my car?“ It all goes into the notebook.

3. Reflecting on your trajectory as an artist, which kind of themes, motives and styles always inspired you? Have they changed over the years?

The form of my poems has changed with every book, but all of them come from the same place, they’re all powered by the same source. I don’t really believe that a person can simply pick and choose a different theme once he or she has fully committed to being a writer and jumped into the deep end of the pool. You’re stuck with your theme, that’s why it’s your theme. That’s not a bad thing though. Not at all. Figure out what to do with it, how to make it new. Work, work, work. An acquaintance once said to me that writers have the easiest job in the world: they can write about anything they want! That’s a false assumption.

4. You’ve spoken at length about the influence of the Austrian writer Ilse Aichinger had on you. The concept of silence and “speaking through silence” was essential to her literary work. How would you relate this silence to your own writing process? And to working in a city like New York, where silence is hard (if not impossible) to come by?

Ilse Aichinger was of the opinion that every word that you write has to be backed by silence, like a currency backed by gold. I fully concur. It is important to weigh every single word, and there are long stretches of time when I don’t write any poems at all, even though I’m constantly scribbling in my notebook. Those weeks or months have to be endured. They are not pleasant. But just writing random stuff in order to feel "useful“ and "not lazy“ is almost always a bad idea. At least in my opinion.

New York City is actually a great place to work in. I’m in the Bobst Library every day, and lately I’ve started spending my mornings in the fantastic Poets House overlooking the Hudson. Lots of silence to be had there. But if I just want to read and take some notes, a crowded café will do just fine. I always work in cafés back home in Switzerland and don’t really mind the noise.

5. Which poets (and authors) have inspired you the most and in which way? With which poet would you love to speak about his/her work if that were possible?

Emily Dickinson, Marina Tsvetaeva, Sylvia Plath, Ilse Aichinger, and Anne Carson. That’s my starting five. George Oppen is my 6th man off the bench. These are the authors that have changed me, have changed how I look at literature and thus at the world.

6. You are the new writer-in-residence at Deutsches Haus at NYU. If we may ask, are you currently working on any specific projects?

I’m currently working on the manuscript for my next poetry collection. It will be published later this year.

7. Is this your first time in New York City? What were your first impressions of this city? And has anything about New York come as a surprise?

Yes, I’m here for the first time. I expected the city to be packed with people and cars, but I did not expect to feel at home so quickly. I like to walk a lot and New York is perfect for long walks. Just pick a street and go. There are so many people from all over the world, you simply blend in and drift along. It really is a melting pot, and melting pots are great. Also, I’ve discovered the joys of strawberry licorice. Thanks, Trader Joe’s.