Laura Bieger is Chair of American Studies, Political Theory and Culture at Groningen University. She is the author of Ästhetik der Immersion (transcript 2007), which examines public spaces from Washington’s government district to the Las Vegas Strip that assert their function aesthetically—by turning world-image-relations into immersive spectacles. In another book, Belonging and Narrative (forthcoming), she considers the need to belong as a driving force of literary production and the novel as a primary place and home-making agent. Her essays and reviews have appeared in New Literary History, Amerikastudien/American Studies, Studies in American Naturalism and ZAA. She has held teaching and research positions at Freie Universität Berlin, Universität Wien, Albert-Ludwigs-Universität Freiburg, the University of California at Berkeley, and IFK Wien. During her time at Deutsches Haus at NYU she conducted research on her project The Reading Public & the Power of Literature. 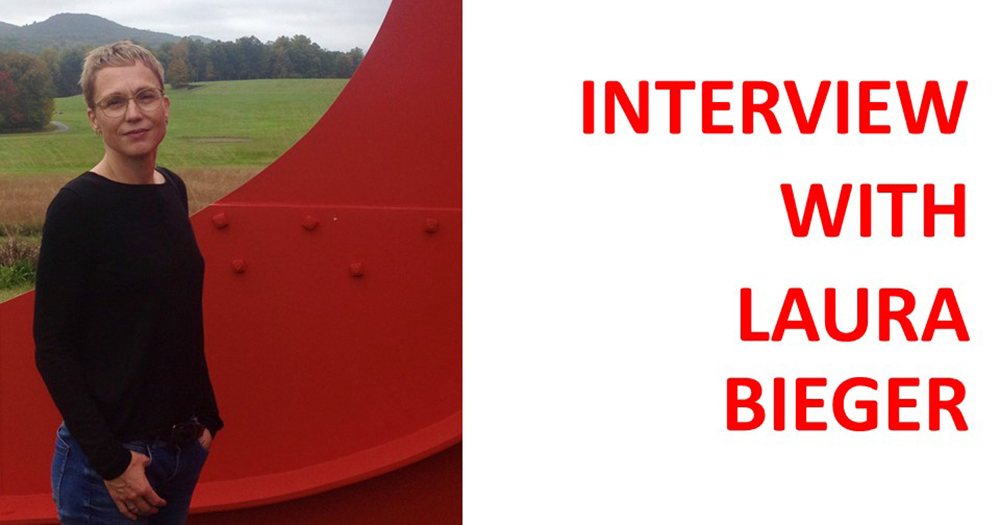 1. When you were growing up in Germany, what made you want to study American literature and culture?

With hindsight I would say that it all started with a bike ride. After finishing high school, hungry for adventure and uncertain about what to do with my life, I persuaded my boyfriend at the time to cycle across the U.S. with me. He said yes, off we went, and on our way from LA to DC I found the physical task of crossing the continent less challenging than the intellectual task of reconciling the mediated images and narratives shaping my expectations with actual places and people. In fact, the latter proved to be so engaging that it became a lasting concern and professional occupation.

Teaching American Studies outside of the U.S. comes with a double perspective, not unlike that of an ethnologist in a way. After all, you are grappling with a foreign culture. And whatever you may find problematic or wrong with this culture does not concern you with the same directness as any fault or trouble with your own culture. I have always found this critical distance quite liberating, especially since I did not venture into my field of study out of love for American culture, but because I was puzzled and wanted to understand it.

In any case, the fascinating thing about this foreign culture is that both I and my students are deeply familiar with it in so many ways, be it through its globalized popular and media culture or because many of us have spent substantial amounts of time in the U.S. as exchange students, visiting scholars, guest professors, etc. Dealing with the resulting fault lines between the strange and the familiar, which are at times predictable and at others surprising, makes it especially interesting to do American Studies outside of the U.S.

3. You have also spent time at the University of North Carolina, Dartmouth College, and the University of California, Berkeley. How did the experience of living in the U.S. impact your academic research? What are you hoping to accomplish during your current stay in New York?

I was never a faculty member of an academic institution in the U.S., and the time that I have spent in close affiliation with several of them was always special because of the freedom that comes with the informal status of being a visitor. Privileges easily outweigh responsibilities! Moreover, short-term commitment makes you more involved in extracurricular activities than you would be on a long-term basis. It is an institutionalized state of exception. And as an American Studies scholar it comes with the benefit of presenting you with potential research material at every step you take. Random, non-stop exposure to my object of study is by far the most crucial factor in how living in the U.S. on and off affects my work.

But of course there are always active interests as well, and during my present stay I hope to get a better sense of the current state of the public sphere in this country. My current research is on the reading public. And while the work is historical in scope—it traces the consolidation of the public sphere that gained shape in the sixties, which is undergoing a vast transformation again today—New York with its strongly developed intellectual and public culture is a good place to be thinking about these issues!

4. In your first book, Ästhetik der Immersion, you wrote about urban space in Washington D.C., Chicago, and Las Vegas. What led you to write about these cities? What insights did you gain from your research?

I was drawn to these sites because of their very different ways of designing public space. And when comparing Washington’s government district, Chicago’s White City, and the Las Vegas Strip in terms of their spatial design, it occurred to me that what these three sites shared was the planned attempt to provide an intensified kind of experience that blurs the boundaries between world and image: an experience that invites those who enter these carefully planned and administered spaces to immerse themselves in aesthetic spectacles. In studying my three sites, I was less interested in valorizing and judging them, and more interested in finding out how they work, i.e. how they use different kinds of architecture and urban planning for specific political, social, and commercial ends. What similarities and differences does this comparison bring into view?

To name just a few of my findings, Washington’s government district was commissioned by the federal government, and the outcome was monumental and classicist. Adapting architectural models from ancient Greece and Rome had the benefit of invoking historical grandeur in tandem with democratic tradition, and Washington’s planners were keen to dramatize this effect in a Versailles-like setting that amplified its staged monumentality. The bourgeois elite that commissioned the White City on the occasion of the World’s Columbian Exposition had an educational agenda. The image of urbanity invoked by its classicist design was, above all, clean and orderly. It made the future look like the past. But the ephemeral mode of construction—plaster combined with the new possibilities of the steal-frame—that was championed for the first time on this occasion made its architecture more akin to the casino hotels on the Las Vegas Strip than to Washington’s government buildings. And finally, in Las Vegas, competing casino owners with a strictly commercial agenda and flaming budgets commissioned and developed an entertainment architecture that blurred the boundary between world and image to the sole end of staying immersed in—and willing to keep consuming—the provided spectacle for an extended period of time.

5. In your most recent book the two primary topics of your research are belonging and narrative. Are you currently researching these topics further? Have recent political developments in the U.S. changed your understanding of American culture and perhaps impacted the direction of your research? What will be the topic of your talk at Deutsches Haus on November 17th?

My forthcoming book On Belonging and Narrative explores how belonging and narrative enable and condition each other. I believe that doing so can lead to a richer understanding not only of narrative in general but also of narrative art, the novel in particular. My point of departure is that belonging is not a given, but is continuously produced in and through narrative. Based on this assumption, the argument that I unfold is that we tell and listen to stories because we yearn to belong, and that the novel has advanced to become a major testing ground in this matter. With its endlessly malleable form, its searching and struggling characters, and its popular tropes of quest and trial the novel indeed is perfectly suited to this end. If and how we belong—by way of leaving our home, building it anew, dwelling in multiple homes, or dismissing the idea of home all together—is to a substantive degree determined by narrative mediation. And with its well-known affinities to troubled states of belonging, the novel has incessantly shaped both the yearning for a place in the world and the narrative vectors and affective currencies in which such a place can be forged. My current research turns from immersive architectures to institutional structures, and from reading individuals to the reading public to examine the literary and media aspects involved in generating that institutional space—the public sphere—on which democratic societies like the U.S. so crucially depend. I decided to work on this topic, which I will talk about at Deutsches Haus on November 17, on the day after Trump’s election. Numb and dumfounded as I was, I asked myself what scholars of literature and culture like me can contribute to the most urgent project of our time: the project of revitalizing democratic culture and its institutions. And counterintuitive as it might seem in our visually inclined media age, I think that the current crisis of democracy reminds us how firmly the public sphere is still grounded in reading and readership. In fact, my hope is that the current crisis creates an opportunity to strengthen these important foundations.

6. Tom Wolfe, the author of the New York classic Bonfire of the Vanities, once said, “One belongs to New York instantly, one belongs to it as much in five minutes as in five years.” How would you assess this statement in light of your research into the topic of belonging and your own experience in New York?

Ha! This is an intriguing thought! I think it underwrites my point about the productive liaison between belonging and narrative. For is this not a beginning of a great story? A story that I inhabit these days, just like many others have done before me. And that I may want to continue, reject or revise the next time I come to this fabulous place.

7. In addition to your academic accomplishments, you’ve also been a professional triathlete and won the ‘Ironman Lanzarote’ in 2001. Is there a connection between your academic and athletic endeavors?

Well, many of our academic endeavors are also quite extensive and lonely. And there is often the sense that even on a good day you have not done enough. You may have had a great run, but your swim practice was mediocre, and you did not ride your bicycle or see your physiotherapist. In the academic world this translates into teaching a great seminar, preparing for the next, running an important faculty meeting, but not getting any writing or reading done on that day. In both worlds, your motivation has to be mostly intrinsic because recognition is scarce on a daily basis. But if you are the kind of person who thrives in this state, it also gives you great liberties!