Iris Hanika was born in Würzburg and has called Berlin her home since 1979. Her first story, “Katharina oder Die Existenzverpflichtung,” came out in 1992 and her first novel, Treffen sich zwei, in 2008. In 2006, Hanika was conferred the Hans Fallada Prize by the city of Neumünster. Her novel Das Eigentliche was awarded the European Union Prize for Literature in 2010, and in 2011, it won the LiteraTour Nord prize. Her novel Wie der Müll geordnet wird was published in 2015.

For the Festival Neue Literatur 2016, Iris Hanika participated in the events "Words with Writers," "No Joke," and "A Literary Brunch." 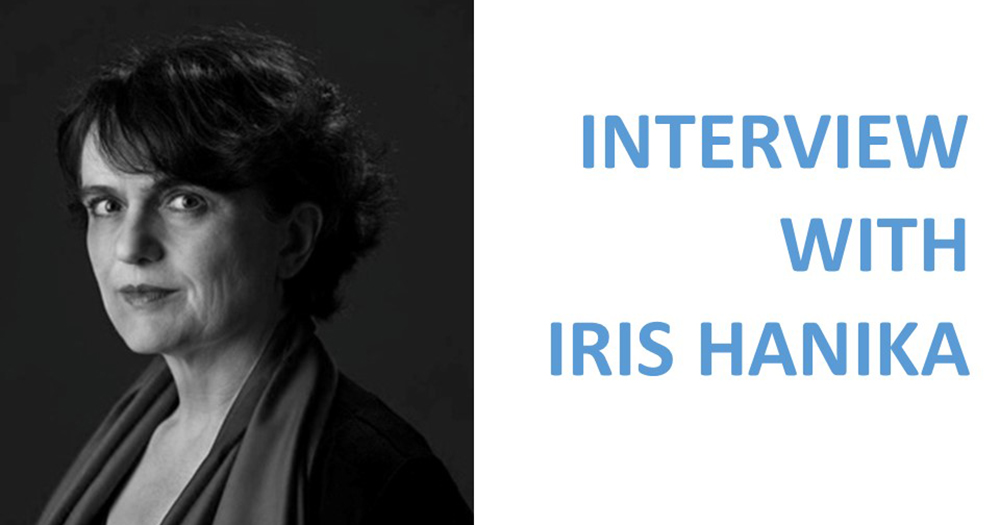 1. You last visited New York quite some time ago. How has the city changed since then? What did you notice?

The city had already vastly changed during my visit in spring of 2003 and was very different from the city I had experienced in 1984, 1985 and 1988. At that time there were numerous homeless people in the streets, and I always vividly remembered the intersection at Houston St and Bowery. It was a wasteland, which I liked, and Yonah Schimmel’s Knish Bakery was right around the corner. With its somewhat run-down exterior, it fit right in. I also remember another bakery somewhere in the East Village because no one there spoke any English, not even Spanish, which I found strange- I didn’t really understand New York at the time. I’m guessing they were speaking Polish or Ukrainian, because I realized later that a part of the East Village is called “Ukrainian Village.” I like that a lot, actually, because I had originally intended to come to New York to study the Ukraine and its perils.

Yonah Schimmel’s bakery looks just like it used to, and there’s currently a lot of construction going on around Houston Street, but besides that everything has changed, at least on my way there from my wonderful apartment- no homeless people, no abandoned buildings, no junkies or beggars, no hazards. Instead upscale shops in former slums, which I find embarrassing, because it doesn’t quite go together, these small cozy shops inside thin brick walls, where the poor used to gather.

Money steamrolls everything, and I have witnessed the same thing happening in Berlin. Of course there are some benefits but only to a certain degree that is reached very early on. The first new term I learned when I arrived was “to price out,” a great phrase, a terrible phrase. To not throw people out, but to price them out. The same thing is happening in Berlin right now.

But those are only a few of the impressions I have gathered. I have only been here for a short period of time, and what is really going to stay with me I’ll only find out when I leave again.

2. Your book Wie der Müll geordnet wird emerged from the idea to “write something pointless.” Where did this wish come from and in how far did it leave its mark on the novel?

The novel itself is about pointlessness, so this idea had a direct impact on the book. Even before I started working on the novel, I was aware of the fact that one cannot write something pointless unless one wants to become a dadaist. That’s why the protagonist is someone who only wants to do pointless things from this moment on. I’m not entirely sure where this idea came from, but I mostly like to focus on form, not content. It’s unfortunate that one cannot write without content. Flaubert had a similar desire. He didn’t want to write something pointless, instead he wanted to write about nothing. So maybe this is a general struggle authors deal with: Ce qui me semble beau, ce que je voudrais faire, c’est un livre sur rien, un livre sans attache extérieure, qui se tiendrait de lui-même par la force interne de son style, comme la terre sans être soutenue se tient en l’air, un livre qui n’aurait presque pas de sujet ou du moins où le sujet serait presque invisible, si cela se peut. (*)

3. What are you currently working on? How will you spend your residency in New York?

I never specifically work on something in particular, but constantly struggle with the fact that I don’t work and procrastinate. From time to time a book gets finished, but I can never really say how I got to that point.

4. Could you tell us something about your creative process and work routine? Do you have a preferred writing time or place?

I have no clue when I write, even though I spend a lot of time at my desk. But I can only really remember very few moments of active writing in my life. Sometimes I’m astounded to come across a book that lists me as its author, and I’m even more surprised when people call me an author. Maybe it has to do with the fact that I’m still somewhat of a clandestine writer, just like I was when I first realized that I wanted to become one. By now I apparently keep my writing a secret from myself as well.

*What seems beautiful to me, what I should like to write, is a book about nothing, a book dependent on nothing external, which would be held together by the internal strength of its style, just as the earth, suspended in the void, depends on nothing external for its support; a book which would have almost no subject, or at least in which the subject would be almost invisible, if such a thing is possible. (Gustave Flaubert to Louise Colet, January 16, 1852)