Heike Steinweg was born in Aachen, Germany, in 1966 and grew up in Cologne. She has worked in Moscow, Odessa, and New York, and now lives with her family in Berlin. Her work has been presented in several exhibitions in Germany and abroad, including the Bauhaus Archive Berlin and the XI Bienal Internacional de Fotografia de Tenerife. Steinweg is known for her broad spectrum of work. Before becoming a portrait photographer, she worked as an actress for several years. 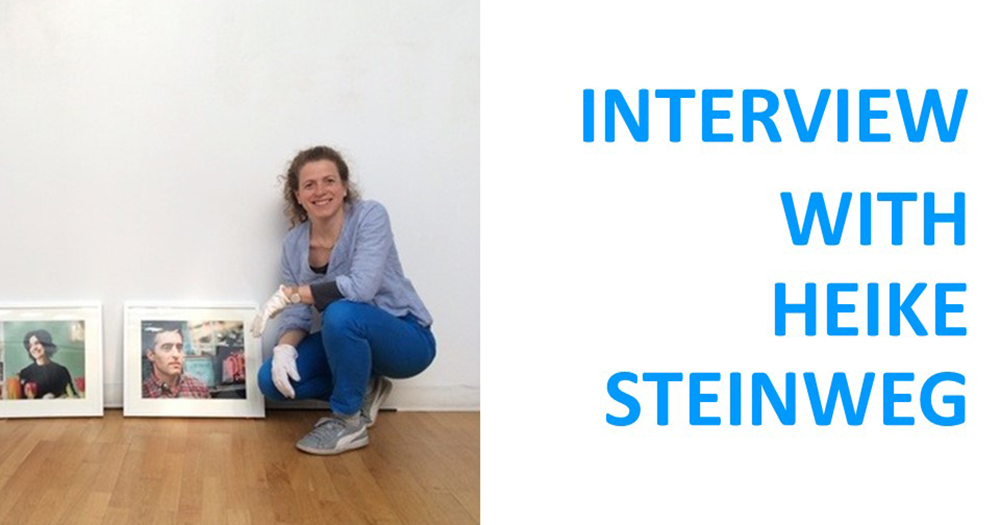 First of all, I would like to thank Deutsches Haus at NYU. I feel honored to have been invited to exhibit my author portraits, which I’ve worked on since 2007, in this particular space. In my newest project, entitled The Last Line, I asked international authors living or working in Berlin to meditate on the last lines of writing from their books. Alongside stirring anecdotes, their responses offer a compelling glimpse into the artists’ creative processes.

2. Where do you draw your inspiration from as a photographer?

This is a very good question, and not easily answered! Maybe it’s better to answer another question - “What makes me tick?” Certainly my curiosity (specifically my curiosity about people) lies at the heart of this matter. I can even give you a specific example: I was at a reading by lê thi diem thúy [the Vietnamese-American poet] and she said the following sentence “I insist on silence.” This sentence moved me deeply and became the motivation behind my portrait of her: There she stands, her body is wide awake and alert, but her eyes are closed. This contradiction immediately creates a sense of tension within the image.

3. When did you discover your fascination with authors?

My love for literature gave me the idea of photographing authors for my project. Berlin is home to the wonderful International Literature Festival, which is modeled on the PEN World Voices Festival. There is an open and cozy atmosphere and it was very easy for me to start a conversation with authors and take my first portraits for the project.

4. What sets them apart from your other subjects?

Writers tend to be exceptional characters. They are people who are used to working alone and are not willing to immediately reveal themselves to somebody else, but if you succeed in making a first gentle approach and building up trust between you, then you will produce portraits that show the inner essence of these individuals.

5. Please talk a little bit about how these portraits come about.

I try to inspire in the authors a deep inner concentration that is connected with their personal character. I like that the quiet nature of my portraits vacillates between inner disquiet and a dreamy sense of concentration. Maybe, I can describe my artistic vision as a process in which I explore the threshold between what is visible and what is perceivable.

Furthermore, my portraits (and other images, as well) attempt to create an emotional blank canvas, which the viewer can project his or her own emotions onto. I want the viewer to have the opportunity to meet him- or herself in my images.

6. How do you go about making the subject of your portrait feel comfortable?

Well, that’s going to be my little secret! But one thing is for sure, I like to laugh with the authors. In order to create a beautiful very serious portrait, it is of the utmost importance to have laughed quite a lot beforehand. In order for this exhibition to not be too somber I try to include some wonderful laughing portraits: Nicole Krauss, Katja Petrowskaja – aren’t they simply captivating?

7. Do you collaborate with the authors on the surroundings of the image?

Absolutely! Writers are known for their ability to have great ideas. For example, Aris Fioretos proposed the watch store, where I ended up taking his portrait. The enormous dial of a clock was displayed on the shop window. The last sentence was like a gift. It came to him about a third of the way into the text, and he knew it would stand at the end of the book. He has worked on this book for the last couple of years, and the distance to the last sentence is growing shorter. He needs a little more time to arrive at the end. In this portrait the visual and the contextual coalesced beautifully.

8. What made you decide to incorporate the last line of writing from the books of the authors? Do you want there to be a sort of dialogue between the image and the written word? How did this idea come about?

A portrait always captures a specific moment in time: I am mirrored in the person I am photographing and that person is mirrored in myself, which is to say that in a portrait the photographer is also visible. In addition to the portraits I wanted to ask the authors a personal question about their creative process. People tend to focus on the beginnings of things, but what does it mean to finish a novel after years of intense work? The authors really responded to this idea and gave incredibly personal and interesting answers.

Can you imagine, that Nathan Englander worked on a story for years and years, drafting and redrafting, until, finally, he had the idea of writing it backwards. He began at the end and worked his way to the front, which gave him the distance he needed to see the story clearly again. In this particular case, the first sentence he wrote actually turned into the last sentence. I find this story so unbelievable!

9. Do you have a favorite portrait or an image, which incorporates your favorite story?

Each encounter is singular and a gift. I like to remember all of my portrait sessions and the stories behind them. My encounter with Jonathan Safran Foer, for example! In 2013 I decided to move to New York for two months in order to work on my author photographs. My first shoot was with Jonathan. I was very excited, and we met in the very laid-back atmosphere of his agent Nicole Aragi’s apartment. He was very nice and open to all of my ideas. It was wonderful! I had thought very carefully about the settings of the photographs and finally we took the last image (which is included in the exhibition) behind the pane of glass. Jonathan has this deep, pensive gaze while the chaos of New York City life is mirrored in the windows around him. This is how one imagines the author: as a quiet observer of the world surrounding him or her. In reality, of course, writers aren’t quiet, but incredibly vivacious personalities. To me, there is also the allegory of Plato’s Cave reflected in the image: We are not capable of recognizing the world itself, but only its shadow. I think this is one of my strongest images.

10. Clearly, you are an avid reader: What are you reading right now?

Currently I am reading the fantastic debut novel of Anthony Marra, called A Constellation of Vital Phenomena (2013, Hogarth). It is a novel set during the war in Chechnya and it examines how a war can break people emotionally and destroy a society. Last year I had the pleasure of taking a portrait of Anthony for the Suhrkamp Verlag in San Francisco.

11. The natural light in your images is so beautiful – did you ever consider using artificial light?

Thank you for saying that. Yes, light is the first thing I look for. Photography means painting with light. I always search for the light that will make my subjects shine. The light determines the atmosphere of an image. Of course this is also possible with artificial light, but this is a much more complicated and time-intensive process.

12. Do you still shoot film or have you made the transition to digital?

I’ve made the switch to digital and feel okay. But I do sometimes wonder: What will happen to my archive in ten, twenty, sixty years? Will my files still be readable and accessible at that point?

13. How do you determine whether to use black and white or color for your photographs?

I love shooting in color, especially when the content of the image is monochromatic. But there are certainly images that call for black and white. Usually it is a question of composition or for example, the utmost concentration visible in the face of Jonathan Lethem.

14. What project would you like to pursue next? What is your dream project?

I definitely want to continue working on this project and publish a book with the images. I would also like to seek out authors in in their home countries. That’s the wonderful thing about being a photographer – being able to combine travel with work.

But there is another project that I am very excited about. I am part of a female choir and we are planning on traveling to the country Georgia in the fall for a musical exchange with a Georgian women’s choir. My idea is to take portraits of the women of the Georgian choir in their homes - in their kitchens to be precise. The kitchen is such an important living space and this idea has already influenced my current work. I’ve photographed three authors in their kitchen.

“My dream project”… This is such a nice American question! I’m very German in my approach. If I had said ten years ago, that my dream was to have a solo show in New York City, people would have thought I was crazy! My approach is more subtle: I like to throw a little stone into the water and see how the circles spread; where new encounters begin etc. But of course, one should always remember to throw the little stone!

I already mentioned that I lived in New York City for two months in 2013. I love this city. It’s such a lively place. People here are so talkative and open and enthusiastic! This correlates to my own character. I’m from Cologne and people from the Rhineland are known to be more humorous and talkative than their Berlin counterparts. That said, I love Berlin and live there with my family. Berlin and New York are cosmopolitan and culturally exciting cities. 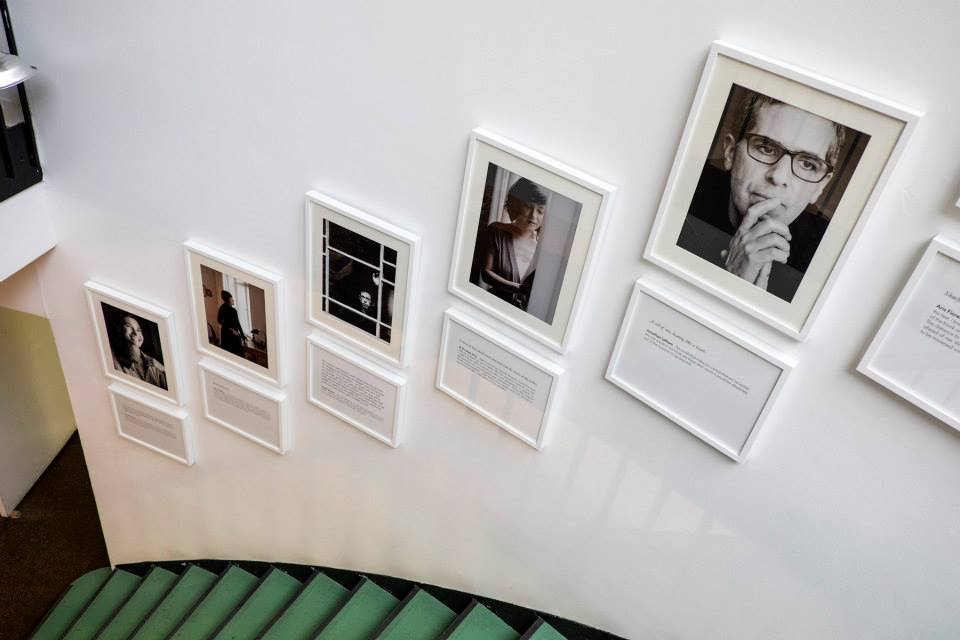