Hans Weiss was born in Hittisau, Vorarlberg, Austria in 1950. He studied Psychology, Philosophy, and Pedagogy at the University of Innsbruck where he did his Ph.D. in 1976. In 1978 he completed a postgraduate course in medical sociology at the Vienna Institute for Advanced Studies. He received a research grant from the British Council with stays at the Universities of Cambridge and London in 1978/79. In 1980, he worked as a pharmaceutical consultant, collecting material on the business practices of the pharmaceutical industry for journalistic reasons. Based on his research, he wrote two books Gesunde Geschäfte and Bittere Pillen, which caused a sensation at the time. Bittere Pille sold more than three million copies in the meantime and became one of the greatest German-language book successes. From 1994 - 1995 he trained at the International Center of Photography in New York and in 1997/1998 as well as in 2010/2011 at the School of Artistic Photography in Vienna.

For information on Hans Weiss's exhibition "The Towers of Babel," please click here. 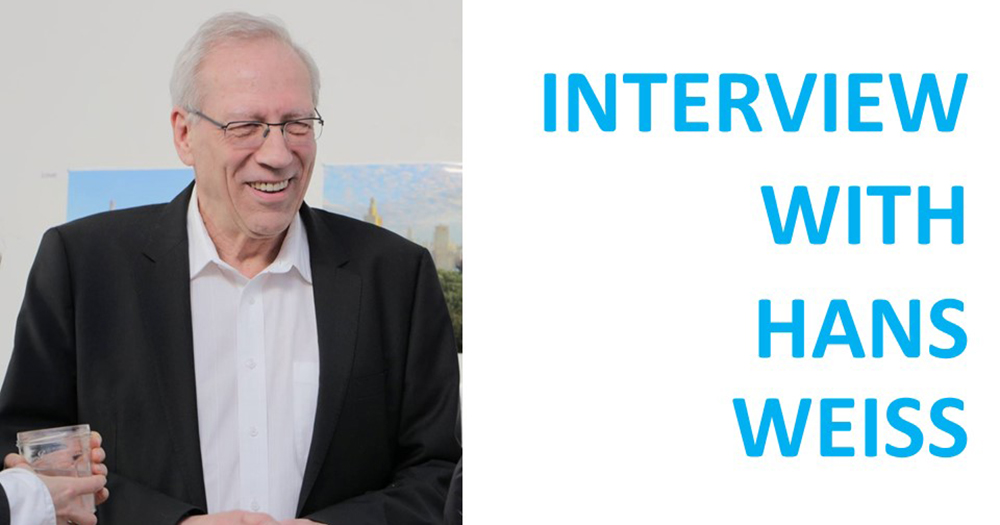 1. Your current photography exhibition at Deutsches Haut at NYU captures the view from the 10th floor of NYU’s Bobst Library, from the same spot, between 2014 and 2018, at different times of the day and during different seasons. What made you choose this particular spot?

Whenever I stay in New York - usually five or six weeks every year - I use the reading room on the 10th floor of Bobst Library as my work space. It is quiet, I am surrounded by students and books, and I have this great view in front of me: nature (Washington Square Park) and culture (Manhattan skyline with Empire State and Chrysler Building). There are huge windows from floor to the ceiling and even though it is always the same view, it is also always different: changing lights, changing colors, changing impressions.

2. The photos in the series “The Towers of Babel” were all taken with an iPhone. Why did you choose this medium over a traditional camera?

I started the project not knowing that it would become a longtime project. I use my iPhone regularly as a visual diary. So, the first pictures were shot for private memory. I only started thinking about turning this body of work into an exhibition in 2017. Until 2017 I used an iPhone 4 and after that an iPhone 8. Photographically there is a big difference between the two: I can enlarge iPhone 8-prints a lot bigger than iPhone 4-prints. I am surprised about the quality and the sharpness of the photos. I think it has to do with the fact that I did not take the pictures by holding the iPhone in my hand, but pressing it to the window - with the same stabilizing factor like using a tripod. Using a traditional camera would have meant carrying it with me all the time, which is bulky and heavy.

3. You have spent four years documenting New York City’s skyscrapers. When you first set out, did you think it would take four years to complete this project? How many pictures did you take during this time and how do you go about the editing process?

When I started thinking of this as a serious project, I did not set myself a deadline. Although in my mind the project is finished, I still take pictures at Bobst Library. When you have run a long distance, it takes some time until your pulse is back to normal. After I showed some of my pictures to Juliane Camfield in 2018, I was invited to exhibit them at Deutsches Haus at NYU. I was happy but at the same time scared. How to select a small number of pictures out of about 3000? How can I bring them into an order which makes sense?

By chance I came across a famous picture from the Dutch painter Pieter Bruegel the Elder: “The Tower of Babel” (1563). It illustrates a story from ancient times. People started building a tower, to reach the clouds and the sky. It was the first skyscraper. God, who was an almighty figure at that time, felt offended and punished the builders. Everyone was given a different language and all of them were scattered all over the world.  My series symbolizes the opposite of this story. People from all places on earth come to New York. They build skyscrapers, they speak 170 different, languages and they understand each other and feel united and at home.

To bring order to the infinite diversity of the world, artists, writers, and philosophers of Pieter Brueghel’s time used magic numbers like 7 or 4. For example, seven vices or four cardinal virtues. This was an important artistic tool in ancient and medieval times - and it helped me too.

In the exhibition you see 4 times of the day, 4 seasons, a group of 4 pictures with the universal topic “love,” and a group of 4 “virtues,” which I defined as curiosity, hard-working, ambition, and dream. Dream not in the meaning of Sigmund Freud’s teaching, but in the sense of Martin Luther King’s  “I have a dream” - a very conscious effort of creating a better world. In addition to these four groups of four pictures there are 7 pictures representing “emotions”: fear, pride, sadness, courage, hope, anger, joy - scattered all over Deutsches Haus at NYU.

4. Are there any particularly memorable experiences from your time in the library that you would like to share with us?

In the fall of 2015, when I was a regular at NYU’s Library, I exchanged a few friendly words with a staff member named Allan. A short time later we became friends. Allan’s Jewish father, who came from Freiburg in Germany, survived Hitler, because in the 1930s he had read Hitler’s infamous book Mein Kampf. He was shocked and thought: “Oh, that sounds life threatening for the Jewish people!” Allan is serious about what he writes. He called his family to immediately leave Germany, but they were hesitant. He was the only one who left for New York - and the only one who survived the Holocaust.

Allan’s mother came from Vienna. She was half Jewish. During the Nazi era, she was a member of an underground resistance group, which helped Polish Jews fleeing via Vienna to Hungary - which until March 1944 was allied with Germany, but still an independent state. Therefore, Jews were not deported and killed like in Poland or Austria. But the resistance group was betrayed and the German secret police Gestapo caught all members, including Allan’s mother. She was sent to the concentration camp Ravensbrück in Germany, but survived. After the war, she spent some time in Vienna, but because the eastern part of Austria was occupied by the Soviet Union, she saw no future by staying and emigrated to New York, where she met Allan’s father.

Allan himself now owns several houses in the Catskills, which he only rents out to very poor people. He does not make any money with that, but he sees this as a moral and spiritual commitment to his mother’s attitude: Helping other people to survive.

5. You divide your time between Vienna and New York. How do you perceive these two metropoles? How has living in these two places shaped you as a person and photographer?

Until the 1980s Vienna used to be at the edge of Europe. Kind of a dead city, living from and with the past. Gray, old fashioned, slow pulse. That has really changed. The overall quality of life in Vienna is certainly much better than in New York. Now it is more diverse than a decade ago. A very well-maintained city (public transport and other public services). The museum scene is almost as vibrant as in New York. If you are a lover of classical music or German speaking theatre or timeless sitting in a coffeehouse or “dolce far niente,” then Vienna is the right place to stay. I love New York, because it is so fast and dense and New York people are the friendliest and most open minded in the world in my opinion. Vienna is a great place to raise kids and live an easygoing life, but for me it is honestly a bit boring. Whereas New York is an exciting place for photographers - in this regard I feel at home here.

6. Your fiction and nonfiction books sold more than five million copies and are translated into 20 different languages. What are the main differences in your approaches to writing and to photography?

For about three years now, I have become more interested in photography than in writing. Before that, I made my living mainly with non-fiction (books and reports for big German magazines). However, from time to time I also wrote literary pieces. Some non-fiction books were the result of huge undercover projects like working as a salesman for big pharma companies - to find out, how they bribe doctors and use patients as guinea pigs. These projects were very demanding and adventurous. You have to organize so many things at once, you have to be constantly aware of yourself playing a role, and you have to be on alert all the time as well as take enormous personal and legal risks. After all, you have to write, which is the most demanding effort. I know quite a few very successful writers. And with only one exception they all think, that writing is a terrible job. The thinking, the editing, the re-writing, the polishing of the words! Awful! But when you have finished something, it is great! Fiction writing is another thing altogether. Did I change the world with my writing? Well, maybe here and there, a little bit, I hope. But all in all, it is rather disappointing, I have to admit.

Photography is very different from anything I write. For me it is more emotional, more spontaneous. At the beginning of photo-projects, I do not think a lot about it. I am more instinct-driven, like an animal. I shoot and I instantly see the result. And only then, possibly, I start thinking. About light, shape, color, improvements, quality, meaning. After that there is the rather technical part of the job: Thinking in files, pixels, color grades, density, and so on. And transferring the images into images and prints, which are of interest for others. And all the organization, which is necessary for an exhibition.

7. What projects (either in writing or in photography) are you currently working on?

Currently I am working on three photo-projects: First, on portraits for which I use an app in the wrong way. The pictures look like portraits the cubist painters produced in France at the turn of the last century: distorted, divided, and reassembled. Second, I am currently working on “Tourist” which is a longtime project I began in 1996. Third, I am working on “Smoke” which has nothing to do with cigarette smoking. And I also began writing my autobiography. 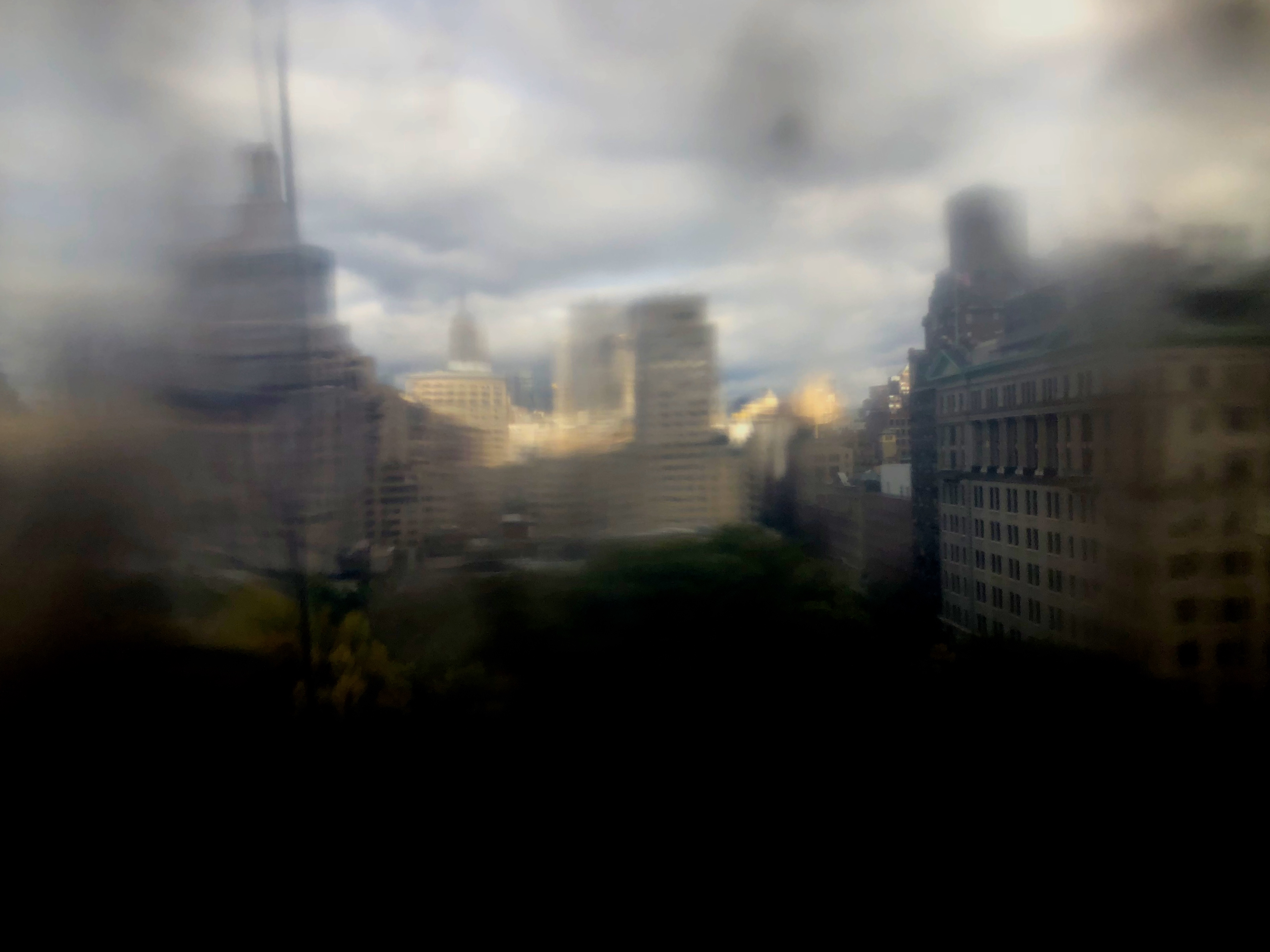