Beate Rothmaier was born in Ellwangen, Germany, and now lives and works as a writer in Zurich, Switzerland. After studying and taking a Master’s degree in German and French Literature at the Universities of Munich and Tubingen, she worked for publishing houses, theatres and as a copywriter at an advertising agency. Her critically acclaimed debut novel Caspar (2005) was awarded the Friedrich-Holderlin-Förderpreis. In 2010 she published her second novel, Fischvogel (The Fishbird), for which she was awarded a year’s grant from the Arts Council of Zurich, and in 2013 Atmen, bis die Flut kommt (Breathing Till The Tide Comes In), the moving story of a father who finds his way to love his child with special needs. In 2015 she spent a six month residency in London with the Landis & Gyr Cultural Foundation, and at present is translating her first novel into English. 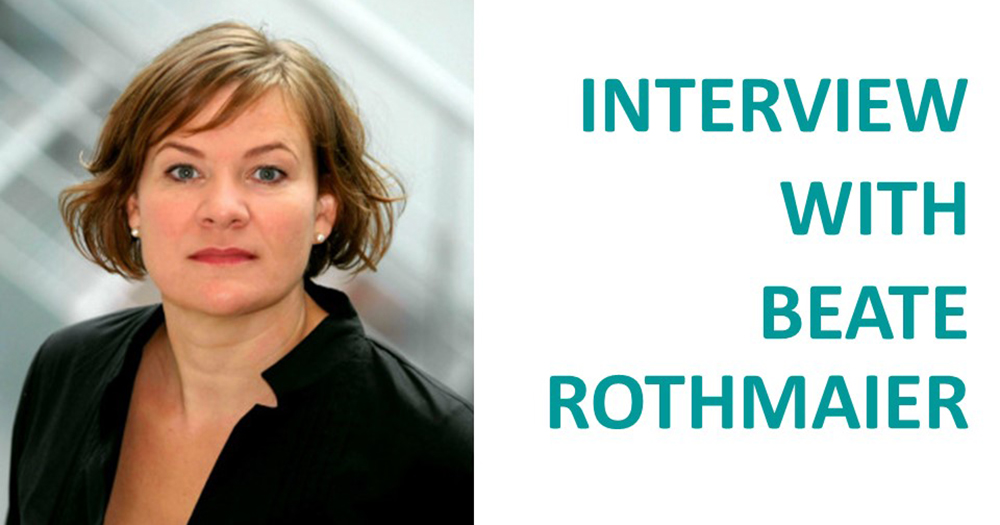 1. Please tell us about your experience of New York. What has changed since your first visit to the city, and how does living here differ from visiting?

New York in my eyes has become an even busier and faster city. People always appear under pressure, areas like the East Village, the Lower East Side have changed a lot since my last visit in 1993. Gentrification has come, houses are wrapped in scaffolding, and many buildings have notices affixed to their walls with permits for rebuilding. And of course, New York after 9/11 is a wounded city. At the Ground Zero Memorial site I read the names of young women who died in the towers with their unborn babies and many memories came back from my last visit to New York, when I sat on top of the World Trade Center, carrying my first child. What gives me hope and pleasure is to see that New York is very much a city of young people. So many fresh faces everyday and everywhere.

2. Could you tell us something about your creative process and work routine? Do you have a preferred writing time or place?

My work routine doesn’t consist of being a writer-in-residence since it is very much attached to my home and usual environment. It is necessary to have as few enticements, attractions and irritations as possible when getting a novel written. During my residency I am constantly collecting the new impressions, images, words, and encounters, and I feel like a whale drifting through the sea, filtering the water, holding back little nurturing treasures.

3. You are currently translating your first novel Caspar into English. Is this a difficult process, and are you experiencing this book, which you wrote in 2005 anew? Are you tempted to edit or rewrite certain passages?

When I stayed in London for six months I fell in love with the English language, especially with literature. I started to write short pieces in English, translated them back into German, revised them, translated them back into English – just as a fun game - travelled between the languages like a ferryman. The German word übersetzen means translating, as well as crossing a river. I thought, why not translate my first novel and have the experience of meeting my former writing self again. It was strange and funny and scary at the same time.

4. You are German, but have lived in Zurich, Switzerland for a long time. What has living in Switzerland taught you about being German?

What I learned is that being a German abroad means being associated with the darkest time in our history – the time of Nazism and World War II. And that Germans and Swiss people are separated by their so fundamentally different historical experiences.

5. May we ask what project you are currently working on? How will you spend your residency in New York?

Currently I am working on several projects: I am rewriting a collection of stories. The first draft is done. I am also working on my fourth novel, which will be about the making of human beings, as well as on a short essay about work – paid and unpaid – and its consequences, and I am as I mentioned above, collecting New York impressions without a certain goal in mind.

6. What book(s) are you reading right now?

At the moment I am finishing the essays Living, Looking, Thinking by Siri Hustvedt, whose work always stimulates me. As for literature I have the pleasure of reading Oskar Maria Graf’s novel Flucht ins Mittelmässige which allows me to dive into the scene of German exiles during the fifties in New York: their struggles, intrigues and how they deal with the clash of Old European values and the new world in America. When coming to New York I discovered the poems of Edna St. Vincent Millay, one of America’s great poets, who is nearly unknown in Europe.