Antonia Low is a Berlin-based visual artist, who has had solo exhibitions at Palazzo Altemps, Museo Nationale Romano (2016); K21 Kunstsammlung NRW Duesseldorf (2015); Kunstverein Braunschweig (2014); Kunstmuseum Bonn (2014); and most recently at Eigen&Art Lab Berlin (2017) and Gingko Space Beijing (2017). Antonia Low has received numerous honours, including an artist residency at Casa Baldi, German Academy in Rome (2016), and a working grant from Kunstfonds (2015). She completed extensive researches on spaces within institutions with the support of the Dorothea-Erxleben-Stipendium from the Cultural Ministry of Niedersachsen (2011-2013), the Bonner Kunstpreis (2013) and the Artists in Residency Programme at IMMA - The Irish Museum of Art, Dublin (2014). Three monographs on her work have been published: Der verlorene Raum/Pax und Concordia, wartend (Kettler Verlag, 2014), Inventar (The Greenbox Verlag, 2012), and Low Deluxe (Argobooks, 2009).

For information on the opening of Antonia Low's exhibition "The Cloisters Model, Part I: Library," please click here. 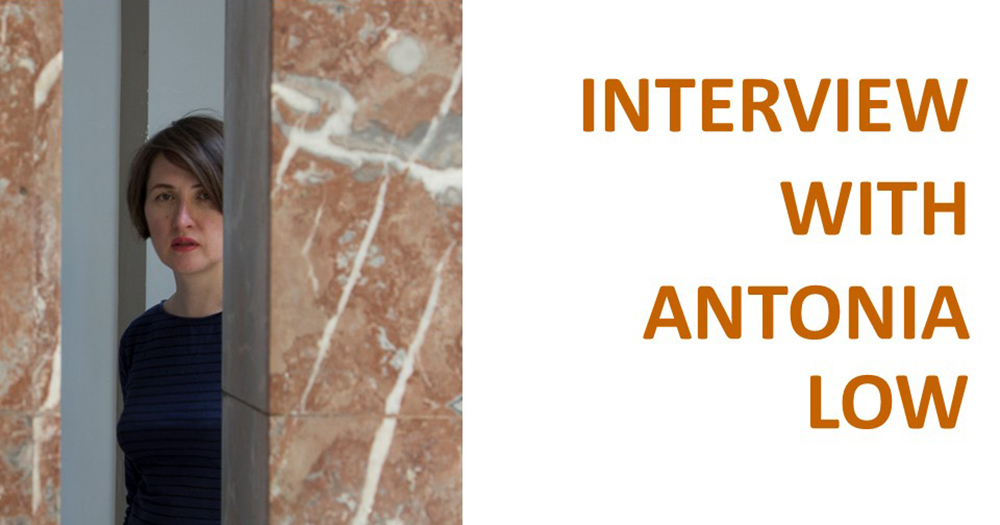 1. Please tell us a bit about your background. As someone who grew up in Bonn, Dublin, and Brussels, how did these international experiences shape your interest in the visual arts? You are now based in Berlin; do you think this city influences the art you make?

My mother worked for the Federal Foreign Office and we moved every three years. The fact that I didn’t grow up in one house, but rather in many different ones, gave rise to my artistic interest in buildings, their inner life, and their individual history. Buildings are like characters for me: their material surrounds us – their ambient light, smell, sound, and feel – all these qualities create a unique atmosphere. Especially in Berlin, the buildings with their thick walls carry a particular historical density. One need only scratch the surface a bit to reveal old wallpaper, murals, defunct cables and building materials from various time period – foams, plasterboard, cement, bricks, willow branches, and clay.

2. How did you first hear about the Cloisters? Can you tell us about your first in-person visit? Did you have the idea then to do an art project about it, or when did the idea emerge?

I visited the Cloisters for the first time in 2012 and was very surprised by the building. I almost got lost in the building, especially because the portals are only one-sided and, when passing through them, you seamlessly find yourself in a new cultural-historical room. From the outside, one can perceive how the different architectural styles are put together, which inspired me a lot. At that point, I already wanted to know how the building came into being and understand the concept behind its construction.

3. What types of possibilities and challenges emerge when creating art about the Cloisters, which on its own is a work of art made up of other works of art?

Is the Cloisters a work of art? It was never conceived as such by the creators of the building or of the original columns, windows, and portals of the European stonemasons. But later, after their change of location, they were seen as such. I read the correspondence between the architect, Charles Collens, and the curator of the Met Museum, Joseph Breck, and I became increasingly aware that the Cloisters developed out of an alchemy of various wishes and longings. The sculptor Georg Bernard brought architectural fragments from various cloisters and chapels in Europe to New York because of their artisanal features. Then there was John D. Rockefeller Jr., who bought this collection and donated it to the Met with the condition that they build a museum with it that could compare to an English Castle. His favorite architect was commissioned, who wanted to create a formally aesthetic neoclassical building. The curator of the Met, however, strictly rejected all ornate interpretation. He was inspired by the idea that the aura of the old architectural fragments could on the whole rub off on the building and create an impressive antique feeling, provided that the fragments were used in the correct style. However, the rooms had to become big and bright enough for the collection. Rockefeller’s wife wanted a practical driveway for new cars and a distinguished entrance hall for events. These are many modern concepts for a building that was supposed to come across as old. One can sense these non-historical touches. It has become a fascinating building for me, but what also inspires me are these likeable mistakes – or the courage to have a vision. With my artistic work, I move on a completely different level of free conception that presents a parallel world.

4. You’ve also been conducting research about the history of the Cloisters. What role does the research play within the larger art project? How have your research results informed your artistic practice?

The research for me is a search for ideas. I find it extremely interesting to imagine the different characters working together on a vision: to conceive of a building out of architectural fragments from a bygone world and to place this building in a new world. What possibilities they had at that time! There was still undeveloped land, the Great Depression led to an abundance of affordance labor from craftsmen, and one could acquire so many beautiful architectural remains from Europe! I definitely would like to capture the attitude of the time and interpret it for my artistic work. The current situation could not be more contrary and difficult: the resources are exhausted. The dilemma racks my brain.

5. The title of your exhibition, which is currently on view at Deutsches Haus at NYU, is “The Cloisters Model, Part I: Library”. Do you already have an idea what the next stage of the project might be?

I have sculptural architectural models in mind that I would like to design for Europe. What can I draw from the story of the Cloisters? How can one use the past as material for the future when the possibilities and resources of the past no longer exist? It’s about a new vision. I feel the need to reverse the construction of the building, to deconstruct it, or to roll up the Cloisters like a carpet and send it on a journey in this new form.

6. Could you tell us a bit more about the International Studio and Curatorial Program (ISCP) in Brooklyn, where you are currently working as an artist in residence, sponsored by the Senate Department of Culture and Europe, Berlin? How did you get involved in this program?

The International Studio & Curatorial Program understands itself as a laboratory for artists and curators from all over the world. ISCP supports the creative advancement of contemporary artists and curators, and promotes cultural exchange through residencies, open studios, field trips and public programs. It is housed in a former factory in East Williamsburg, with 35 work studios and two gallery spaces, where exhibitions, public talks, and offsite projects take place. Once a year, Berlin-based artists can apply for this residency through the Berlin Senate, which I did with my research project on the Cloisters. I am very happy to be here and to get to know so many inspiring people at the residency program, at the Deutsches Haus NYU, and in all of New York.

7. Now that you’re in New York, are there any particular galleries, exhibits, or museums you have already visited or hope to visit? Beyond your residency and art, how else do you plan to spend your time in New York?

The most interesting exhibition I have seen so far is the “Art and China after 1989: Theater of the World” at the Guggenheim Museum. I still hope to visit the exhibition on Gordon Matta Clark at the Bronx Museum. Also, I am taking part in a group show “When things become thoughts, a sinkhole in my terraformed mind” at MAW gallery in Chinatown, curated by Eli Kerr, whom I met at the ISCP. Beyond art I really would like to see the Period Rooms in the Brooklyn Museum and experience more of the everyday life in Brooklyn. 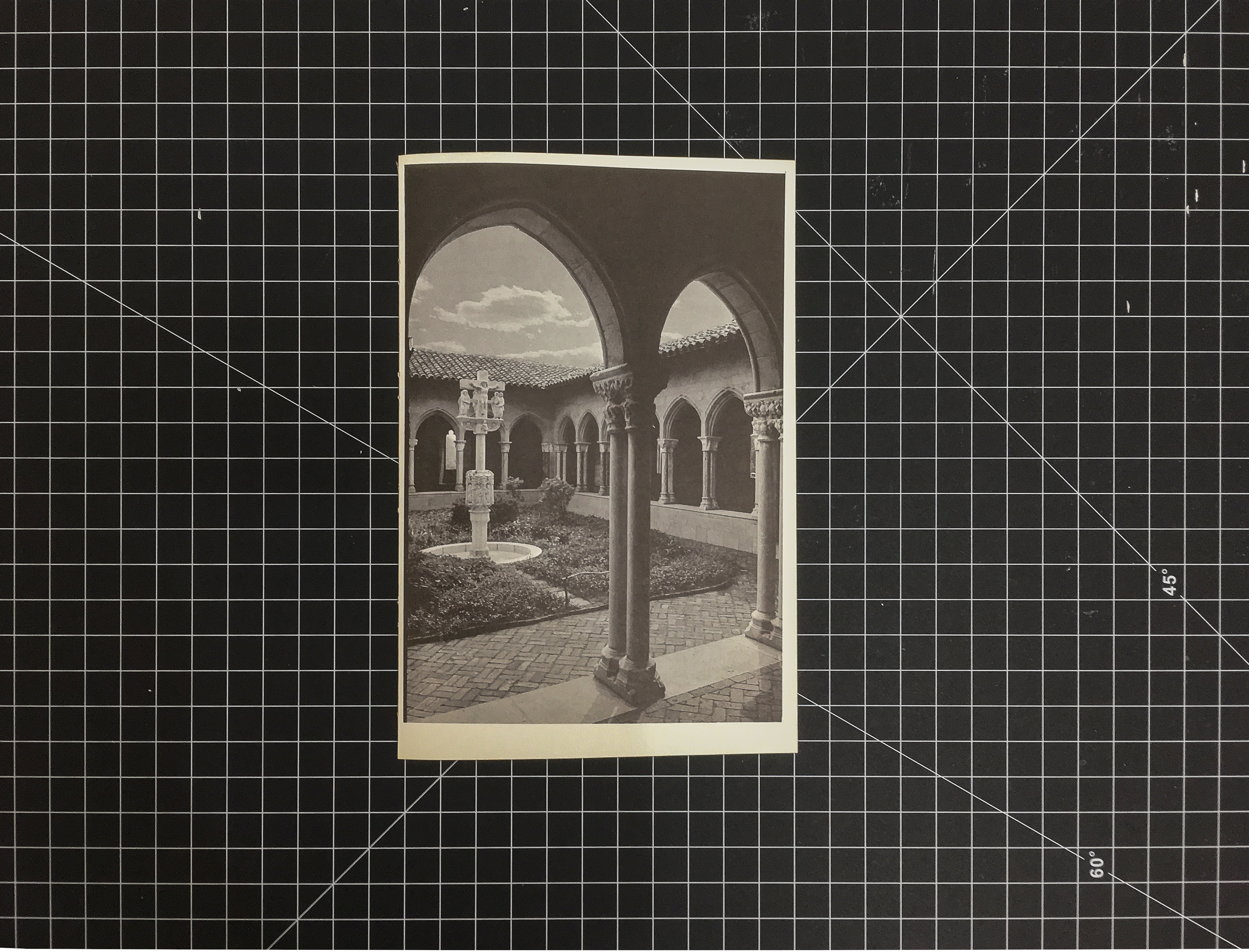