© Colonel Chris Hadfield / NASA
An aerial shot of Berlin showing differences in the illumination of Eastern and Western parts of the city (taken in 2013). 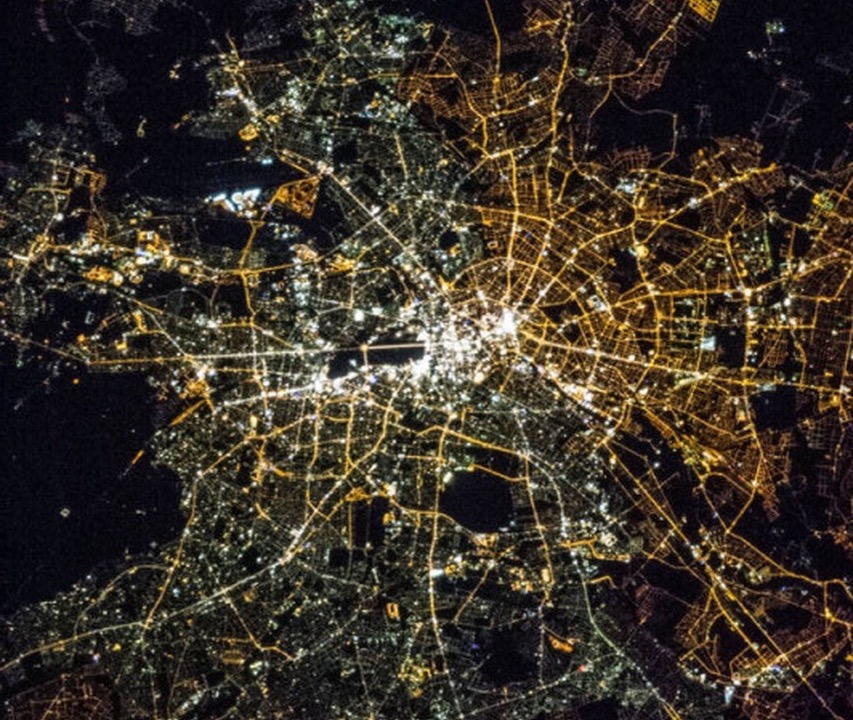 NYU’s Center for European and Mediterranean Studies and Deutsches Haus at NYU present “Political Culture in Contemporary Germany: A House Divided?” with Kai Arzheimer (University of Mainz), Ross Campbell (University of West Scotland), Lars Vogel (University of Leipzig), and Sarah Wiliarty (Wesleyan). The conversation will be chaired by Thomas Zittel (NYU/Goethe-University Frankfurt). Welcoming remarks will be provided by Wolfram von Heynitz, the Deputy Consul General at the Consulate General of Germany New York.

The Berlin Wall fell in November 1989, and with it fell the political, economic, and cultural division of Germany and Europe. Ongoing debates, however, stress the persistence of a continued divide between East and West–a Wall after the Wall, so to speak. This panel discussion advances from these debates and takes stock of political culture in contemporary Germany. The panel will in particular try to gauge whether we indeed continue to see systematic regional differences between East and West, and to find out how these differences manifest themselves politically/economically/culturally; why exactly they exist; and what their broader implications and repercussions might be. The panel assembles internationally acknowledged experts on German politics who will explore these questions from different perspectives and based on different data. The speakers will offer introductory comments and thoughts on the issues and then enter into a moderated panel conversation and a Q&A with the audience.

Kai Arzheimer is Professor of German Politics and Political Sociology at the University of Mainz, with special expertise in electoral politics (broadly defined) and also on right-wing parties in Europe. He is the author and editor of 10 books and published, among others, in Electoral Studies, Political Geography, German Politics, West European Politics, Political Analysis.

Ross Campbell is Senior Lecturer in Political Science at the University of West Scotland and author of Popular Support for Democracy in Unified Germany: Critical Democrats published in 2019 with Palgrave.  He is Secretary of the International Association for the Study of German Politics and editor of the Journal for Contemporary European Studies. Publications on citizen politics in Germany and East-West differences appeared, among others, in European Journal of Political Research, West European Politics, International Political Science Review, and German Politics.

Lars Vogel is Lecturer at the University of Leipzig’s Institute for Political Science. He is an expert on political recruitment and on the behaviors of parliamentary elites with a special emphasis on East-West differences in German politics. He co-edited, among others, The contested Status of Political Elites. At the Crossroads published in 2018 with Routledge.

Sarah E. Wiliarty is Associate Professor of Government at Wesleyan, with a special focus on German party politics, gender, and energy policy. She is the author of The CDU and the Politics of Gender published with Cambridge University Press in 2010.

Thomas Zittel is Professor for Comparative Politics at Goethe University Frankfurt and currently Max Weber Visiting Professor for European and German Studies at the Center for European and Mediterranean Studies, New York University. His research focuses on comparative political representation with special emphases on legislative organization and behavior, political personalization, campaign politics, and electoral systems. He is author or editor of seven books/special issues and published, among others, in Comparative Political Studies, European Journal of Political Research, West European Politics, and Party Politics.

“Political Culture in Contemporary Germany: A House Divided?” is funded by the DAAD from funds of the German Federal Foreign Office (AA).