FESTIVAL NEUE LITERATUR brings New York audiences new writing from Austria, Germany, Switzerland, and the United States, as the first and only festival to spotlight German-language and American fiction. This year marks the 10th anniversary of Festival Neue Literatur. The theme of the 2019 festival is *IN MEMORY WE TRUST* curated by literary critic, writer and translator, Liesl Schillinger and Tim Mohr, celebrated German-language translator and author of Burning Down the Haus.

>>Register for the events here: bit.ly/inmemorywetrust<< 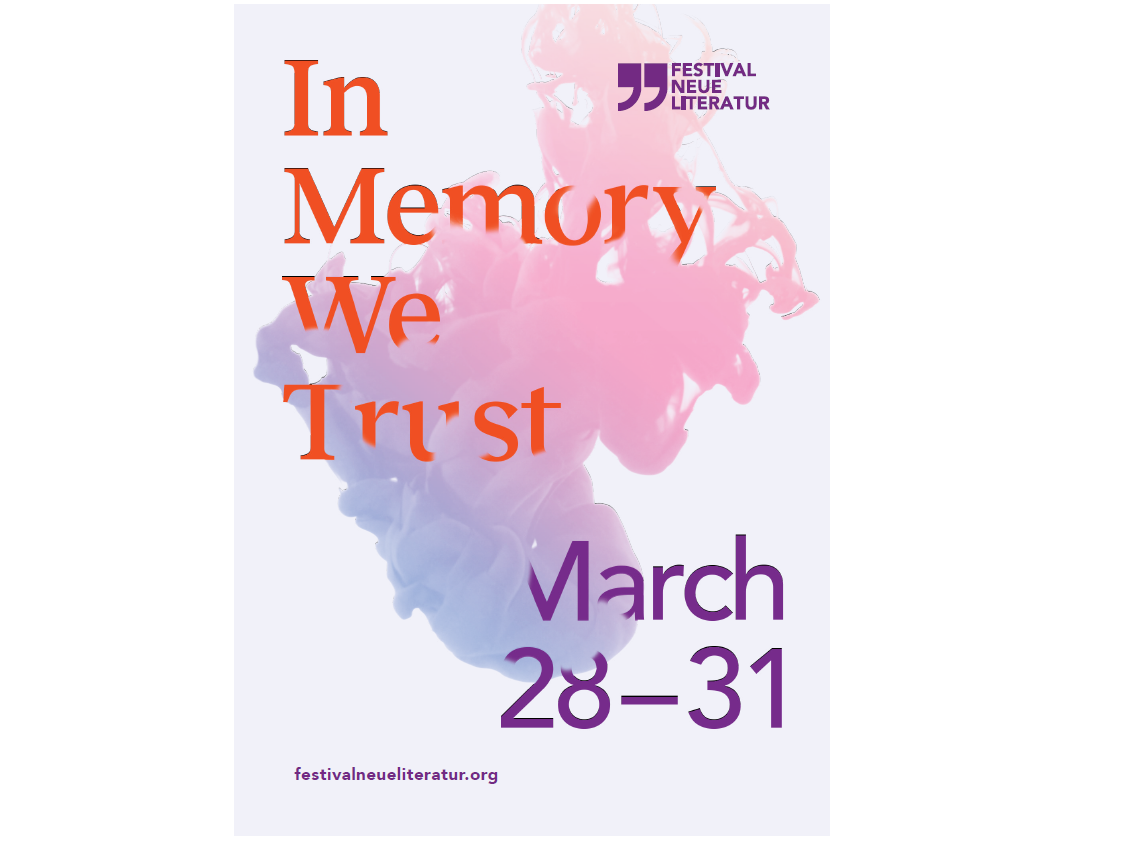 Stefanie de Velasco (Germany): is a regular contributor to publications such as Zitty, FAZ, and die Zeit, and her debut novel, Tigermilch, was published in 2013 by Kiepenheuer & Witsch. It was translated into multiple languages, including English (as Tiger Milk), and adapted into a feature film.

Daniela Emminger (Austria): author of Kafka mit Flügeln and Gemischter Satz, which was on the longlist for the Austrian Book Prize 2016. Daniela lives and works as a writer and freelance journalist in Vienna. She has received various scholarships and awards.

Dana Grigorcea (Switzerland): author of the novel Baba Rada, Life is Temporary and So is The Hair on Your Head, which was awarded the Swiss Literary Pearl.  Grigorcea was awarded the 3sat Prize in Klagenfurt at the Ingeborg Bachmann competition 2015 for An Instinctive Feeling of Innocence, which is to be published in April 2019 by Seagull Books.

Pierre Jarawan (Germany): has won international prizes as a slam poet, received the City of Munich literary scholarship (the Bayerische Kunstförderpreis) for The Storyteller, to be published by World Editions in April 2019, and was chosen as Literature Star of the Year by the daily newspaper AZ.

Gianna Molinari (Switzerland): works as a programming assistant at the Solothurn Literary Forum. In 2012, Gianna received a grant to attend the authors’ workshop Prosa at the Literarischen Colloquium Berlin and won the jury prize and audience prize at the 17th MDR Literary Competition that same year. In 2017, she won the 3sat Prize in Klagenfurt for an excerpt from her debut novel, Everything Is Still Possible Here.

All FNL events are free and in English. RSVPs are required due to limited seating. Go to bit.ly/inmemorywetrust:

The festival's signature translation event returns and pays homage to writers who translate and translators who write. On this very topic, the celebrated novelist and literary translator Idra Novey remarked in an essay entitled Writing While Translating that, "to begin writing after translating is to begin airborne—suspended between languages—a reckless place I’d like to believe leaves a writer’s mind particularly open to innovation not just with word choice, but with tone and irony and all the other subtle, stylistic aspects that add up to what we call a writer’s voice."

How does the interplay of geography and time alter the identity of a person, a character, a city, a nation? The lives we lead, wherever we live, are shaped by events that happened before we were born, not necessarily in our own countries. To understand who we are, we need to understand who we were, and where we came from. In this panel, we speak with four novelists whose books travel to foreign lands, delving into past events, personal and political, mining memory, and exposing buried clues that define their characters in the present. Is it dangerous to romanticize distant countries, vanished people, and past times? Or can it be cathartic; a way to inhabit the present more fully and meaningfully?

SUNDAY, MARCH 31, 2PM, Deutsches Haus at NYU (42 Washington Mews, Manhattan)
The Author’s Voice
The six German-language authors of Festival Neue Literatur pair up with NYC actors to give a sampling from their work, providing a taste of new writing from Austria, Germany, and Switzerland.

How would living under Communism have shaped your identity? What about being the child of Jehovah’s Witnesses; or being a deceived wife; or living in the continual (and reasonable) fear of attack by a ravenous wolf?  Perhaps, if you were affected by such conditions, you could ignore the “monster in the house,” and form successful friendships, relationships and careers. Then again, your experience with that fraught backdrop might linger, stretching into future generations. In this panel, we speak with four authors whose novels and short stories bring to life the specters that haunt them — some political, some familial, some ineffable. These ghosts in the machine have colored their characters’ views of themselves and the world around them. We explore the question of how those who form their selfhood in the shadow of dark influences can use memory to illuminate their reality and liberate their truth.

ABOUT FESTIVAL NEUE LITERATUR: Festival Neue Literatur (FNL) is a collaborative project of New York’s leading German-language cultural institutions: the Austrian Cultural Forum, the German Consulate General New York, the Consulate General of Switzerland, Columbia University School of the Arts, Deutsches Haus at NYU, the Frankfurt Book Fair New York, and the Goethe-Institut New York. All FNL events are free of charge, though RSVPs are required due to limited seating.