On Tyranny: a Conversation with Timothy Snyder and Nora Krug

Deutsches Haus at NYU presents a conversation with the author Timothy Snyder and the author and illustrator Nora Krug about the graphic edition of Snyder’s book “On Tyranny: Twenty Lessons from the Twentieth Century,” which will be moderated by Stephen Naron. A bold connection between past and present, the book is a warning that the lesson of 20th century’s European shift to fascism, Nazism, and communism is highly applicable to the 21st century United States. Now beautifully illustrated by Nora Krug, On Tyranny (Penguin Random House, October 2021) speaks to the ways in which we can draw lessons from the past that should inform the way we move through our present moment. 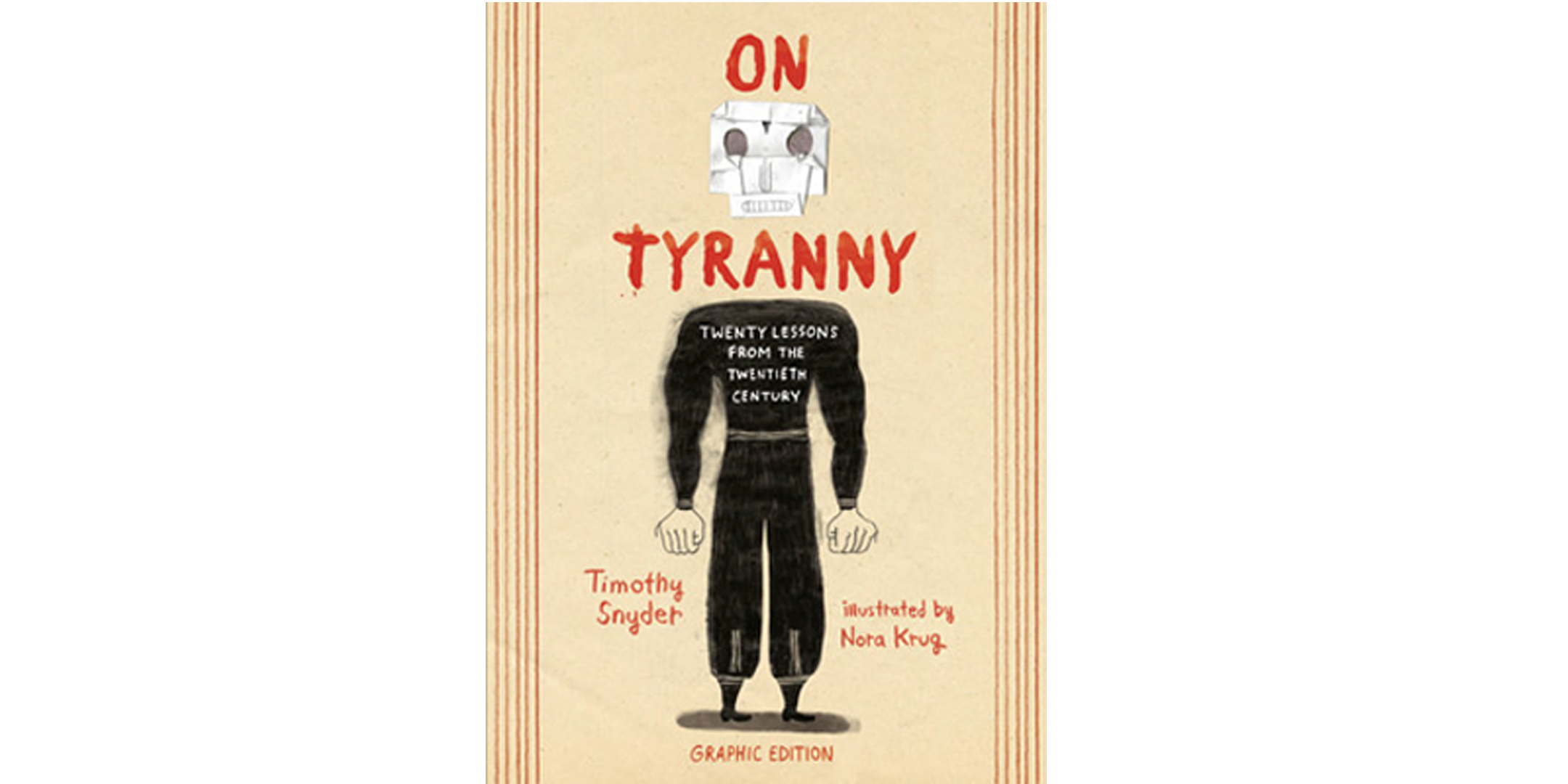 About “On Tyranny: Twenty Lessons from the Twentieth Century:”

Timothy Snyder’s New York Times bestseller On Tyranny uses the darkest moments in twentieth-century history, from Nazism to Communism, to teach twenty lessons on resisting modern-day authoritarianism. The twenty lessons include a warning to be aware of how symbols used today could affect tomorrow (“4: Take responsibility for the face of the world”), an urgent reminder to research everything for yourself and to the fullest extent (“11: Investigate”), a point to use personalized and individualized speech rather than clichéd phrases for the sake of mass appeal (“9: Be kind to our language”), and more.

In the graphic edition, Nora Krug draws from her highly inventive art style in Belonging—at once a graphic memoir, collage-style scrapbook, historical narrative, and trove of memories—to breathe new life, color, and power into Snyder’s riveting historical references, turning a quick-read pocket guide of lessons into a visually striking rumination. In a time of great uncertainty and instability, this edition of On Tyranny emphasizes the importance of being active, conscious, and deliberate participants in resistance.

Timothy Snyder is the Richard C. Levin Professor of History at Yale University and a permanent fellow at the Institute for Human Sciences in Vienna. He speaks five and reads ten European languages. Snyder’s work has appeared in forty languages and has received a number of prizes, including the Emerson Prize in the Humanities, the Literature Award of the American Academy of Arts and Letters, and many others. Snyder was a Marshall Scholar at Oxford, has received the Carnegie and Guggenheim fellowships, and holds state orders from Estonia, Lithuania, and Poland. His books have inspired poster campaigns and exhibitions, films, sculpture, a punk rock song, a rap song, a play, and an opera. His words are quoted in political demonstrations around the world, most recently in Hong Kong. He is researching a family history of nationalism and finishing a philosophical book about freedom.

Nora Krug is a German-American author and illustrator whose drawings and visual narratives have appeared in publications including The New York Times, The Guardian, and Le Monde diplomatique. Krug is a recipient of fellowships from Fulbright, the John Simon Guggenheim Memorial Foundation, and others. Her books are included in the Library of Congress and the Rare Book and Manuscript Library at Columbia University. Her visual memoir Belonging: A German Reckons with History and Home (foreign edition title Heimat) was chosen as a best book of the year by the New York Times, The Guardian, NPR, Kirkus Review, the San Fransisco Chronicle, and the Boston Globe. Krug’s illustrations have been recognized with medals from the Society of Illustrators. Her visual biography, Kamikaze, about a surviving Japanese WWII pilot, was included in Houghton Mifflin’s Best American Comics and Best Non-Required Reading, and her animations were shown at the Sundance Film Festival. Krug is Associate Professor of Illustration at the Parsons School of Design in New York City.

Stephen Naron has worked as an archivist/librarian since 2003, when he received his MSIS from the University of Texas, Austin. Stephen pursued a Magister in Jewish studies/history at the Freie Universitaet Berlin and the Zentrum fuer Antisemitismusforschung, TU. Stephen has worked with the Fortunoff Archive for more than 12 years, starting as an Archivist. Now, as director of the Fortunoff Archive, Stephen works within the wider research community to share access to our collection through the access site program, as well as writing and presenting on testimony for conferences, symposiums and class sessions inside and outside Yale. Stephen is also responsible for spearheading initiatives such as preservation and digital access to the collection; cooperative projects with other testimony collections; oversight of fellowship and research programs; and the production of the podcasts, ethnomusicological recordings, and the Archive’s documentary film series.

Thanks to Dyana Messina, Director of Publicity, Crown and Currency (imprints of Random House, a Division of Penguin Random House, LLC) for her organizational support of the event.

“On Tyranny: a Conversation with Timothy Snyder and Nora Krug” is funded by the DAAD from funds of the German Federal Foreign Office (AA).