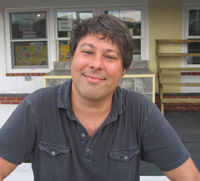 Professor of Psychology and Politics

John T. Jost is Professor of Psychology and Politics and a Faculty Affiliate in the Center for Data Science as well as Co-Director of the Center for Social and Political Behavior at New York University. His research, which addresses stereotyping, prejudice, intergroup relations, political ideology, social justice, social media usage, and system justification theory, has been funded by the National Science Foundation and has appeared in top scientific journals and received national and international media attention. He has published over 250 articles and 6 books, including A Theory of System Justification (Harvard University Press, 2020), which was a finalist for the PROSE Award for Excellence in Scholarly Publishing, and Left & Right: The Psychological Significance of a Political Distinction (Oxford University Press, 2021), which received the Juliette & Alexander George Outstanding Political Psychology Book Award. He has received numerous honors and awards, including the Gordon Allport Intergroup Relations Prize (three times), Erik Erikson Award for Early Career Research Achievement in Political Psychology, International Society for Self and Identity Early Career Award, Society for Personality and Social Psychology Theoretical Innovation Prize, Society of Experimental Social Psychology Career Trajectory Award, Carol & Ed Diener Mid-Career Award, and the Morton Deutsch Award for Distinguished Scholarly and Practical Contributions to Social Justice. He has served on several editorial boards and executive committees of professional societies, including the Board of Directors of the Association for Psychological Science. Professor Jost is currently editor of the Oxford University Press book series on Political Psychology. and Editor-in-Chief of Frontiers in Social Psychology. He is a Fellow of the Society of Experimental Social Psychology (SESP) and the Association of Psychological Science (APS), and is a past President of the International Society of Political Psychology. He has received honorary doctorates from the University of Buenos Aires in Argentina (2018) and Eötvös Lorand University (ELTE) in Budapest, Hungary (2021). In 2022, Jost delivered the Aaron Wildavsky Lecture in the Goldman School of Public Policy at the University of California at Berkeley.