Emerging phenomena, such as the spin-Hall effect (SHE), spin pumping, and spin-transfer torque (STT), allow for interconversion between charge and spin currents and the generation of magnetization dynamics that could potentially lead to faster, denser, and more energy efficient, non-volatile memory and logic devices. Present STT-based devices rely on ferromagnetic (FM) materials as their active constituents. However, the flexibility offered by the intrinsic net magnetization and anisotropy for detecting and manipulating the magnetic state of ferromagnets also translates into limitations in terms of density (neighboring elements can couple through stray fields), speed (frequencies are limited to the GHz range), and frequency tunability (external magnetic fields needed). A new direction in the field of spintronics is to employ antiferromagnetic (AF) materials. In contrast to ferromagnets, where magnetic anisotropy dominates spin dynamics, in antiferromagnets spin dynamics are governed by the interatomic exchange interaction energies, which are orders of magnitude larger than the magnetic anisotropy energy, leading to the potential for ultrafast information processing and communication in the THz frequency range, with broadband frequency tunability without the need of external magnetic fields.
I will present the first evidence of sub-terahertz dynamical spin pumping at the interface of a uniaxial insulating antiferromagnet MnF 2 and platinum thin films, measured by the ISHE voltage signal arising from spin-charge conversion in the platinum layer. The ISHE signal depends on the chirality of the dynamical modes of the antiferromagnet, which is selectively excited and modulated by the handedness of the circularly polarized sub-THz irradiation (see figure). Contrary to the case of ferromagnets, antiferromagnetic spin pumping exhibits a sign dependence on the chirality of dynamical modes, allowing for the unambiguous distinction between coherent spin pumping and the thermally-driven, chirality-independent spin Seebeck effect. Our results open the door to the controlled generation of coherent pure spin currents with antiferromagnets at unprecedented high frequencies. 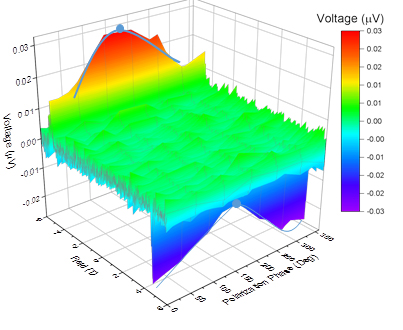