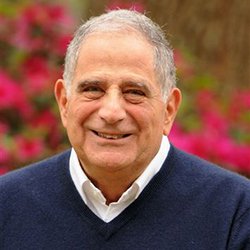 Born in 1935 in Pittsburgh, Pennsylvania, Dr. Jack G. Shaheen has dedicated his career to identifying and contesting damaging stereotypes of Arabs and Muslims in American media. He also has connected their development to the portrayals of other marginalized groups including Jews, Native Americans, Asian Americans, Latinos, and African Americans. His research analyzes the origins of these visual caricatures, explains their stubborn persistence, reveals their very real ramifications for innocent people, and presents solutions to counter them effectively.

A professor, author, and professional consultant for films such as Syriana and Three Kings, Shaheen, with the help of his wife Bernice Shaheen, collected and analyzed materials which depicted Arabs and Muslims as the godless “cultural other.” The Jack G. Shaheen Archive now contains nearly 3,000 motion pictures (spanning from late-19th century silent films to contemporary Hollywood productions) and television programs (including comedies, dramas, cartoons, as well as commercials) on DVDs and VHS tapes. Paper ephemera in the archive comprises of editorial cartoons, motion picture posters and stills, comic books, and advertisements. Also included in the archive are movie/TV scripts, law cases, books and magazines, as well as toys and games.

Shaheen is the author of several books including The TV Arab (1984), Guilty: Hollywood’s Verdict on Arabs after 9/11 (2008), and the award-winning Reel Bad Arabs: How Hollywood Vilifies a People (2001, 2009), which the Media Education Foundation produced as a documentary in 2006. He has served as an Oxford Research Scholar and as a consultant for the Los Angeles Commission on Human Relations, the Justice Department’s Civil Rights Division, and New York City’s Commission on Civil Rights.

Shaheen is currently a Distinguished Visiting Scholar at New York University’s Asian/Pacific/American Institute and the Hagop Kevorkian Center for Near Eastern Studies. He is the recipient of two Fulbright teaching awards, the University of Pennsylvania’s Janet Lee Stevens Award, the American Arab Anti-Discrimination Committee’s Lifetime Achievement Award, the Archangel Michael award (from the Greek Orthodox church), and the Pancho Be Award. His extensive collection provides valuable documentation of the representations of Arabs and Muslims in U.S. popular culture and mass media from the late 19th to the 21st century.