Falak Sufi was born in Pakistan in 1983.  She possessed a generous heart, the urge to engage with and change the world, and a brilliantly original, vivacious mind.  She graduated from the National University of Singapore with first class honors in Political Science.  While young, she began to publish the work that showed her great gifts and talent.  Among her interests were women and gender in South Asia, the historiography of this region, and the strength of the humanities.  However, no list can capture the range of subjects about which she thought, spoke and wrote.  She was a much beloved, deeply admired graduate student in Near Eastern Studies at New York University when she died tragically in Spring 2008.  In honor of her memory and with the support of her family, the Kevorkian Center launched the Falak Sufi Scholarship and Memorial Essay Prize in 2010.

To be announced soon...

Manal Khan, a native of Karachi, Pakistan, is excited to join the Kevorkian Center and begin the joint-M.A. program in Near Eastern Studies and Global Journalism in the Fall of 2020. She is a graduate of the Institute of Business Management where she earned a B.S. in Media Sciences. For the last two years, she has worked as an Editorial Trainee for Pakistan's Herald magazine, and as an independent multimedia producer and writer for organizations based in Sindh. She is interested to hone her journalistic skills and engage issues of gender politics, with a focus on the politics of clothing and sartorial laws. We at the Kevorkian Center are thrilled to have her join our program this year as the incoming Falak Sufi Fellow.

Haniya Habib will matriculate at NYU as a student in the Near Eastern Studies Program in the Fall of 2019. Haniya is a native of Karachi, Pakistan and a graduate of Vassar College with a B.A. in Educational Studies and Psychological Science, and a native of Pakistan. Her research at Vassar resulted in a thesis project detailing the genealogy of teaching on Muslim women and feminism at Vassar through an examination of women’s studies syllabi at the college. She is excited to begin her graduate study at NYU and to expand her knowledge of history and literature of the Middle East and to focus her research on gender and anticolonial movements.

Moneeza Burney matriculated at NYU as a student in the Near Eastern Studies program in Fall of 2018. Moneeza grew up in Lahore, Pakistan and graduated with Honors from the Sheffield Hallam University, UK, with a degree in Business Economics in 2013. After returning to Lahore, she worked as a Program Director at the Lahore Students Union (LSU), a non-profit community center, running a youth volunteer program called the Community Service Initiative (LSU-CSI), which has placed 900+ volunteers at 65+ NGOs over the last 4 years and incubated over 20 social projects by student volunteers through its Youth Social Leadership Program (YSLP). The program  received  international  recognition from organizations and institutes around the world. Moneeza also played a pivotal role as a research associate and scriptwriter for a local comic book company where she worked on the critically acclaimed 'Paasban - the Guardian' series' about violent extremism, as well as public service messages for NGOs working on causes ranging from gender empowerment to mental health. In her free time, she has been writing for DAWN newspaper, Pakistan's leading English daily, since 2013. She hopes to explore her different interests at Kevo with the hope to work on youth development in the region, with focus on IDPs and refugees.

Ms. Zuha Siddiqui will matriculate at NYU as a student in the Near Eastern Studies/Global Journalism program in Fall 2017. A native of Karachi, Zuha is set to graduate from the Lahore University of Management Sciences in May with a B.S. in Political Science. While at NYU, Zuha plans to examine the politics of class and ethnicity within the context of contested spaces -- for instance, do various political actors, such as politicians and political elites, state officials, members of law enforcement agencies, exist in concurrence, along with the state? Zuha is also interested in the intersection of gender and politics within the Near East and South Asia, with a particular interest in the examination of how women – central as victims but marginal as agents – exercise various forms of agency within the overtly masculine framework of the post-colonial state.

Shandana Waheed joined the Hagop Kevorkian Center in Fall 2016 from Forman Christian College in Lahore, Pakistan, where she completed her BA in political science in 2016.  As an undergraduate, she was interested in the plight of religious minorities in Pakistan—a subject she has studied through case studies of historical minority endowments and research in Punjab archives in Lahore.  In her first year, she has explored cultural studies courses on neoliberalism, sexuality, consumption, modernity, nationalism, and memory.  She has spent time adapting to and enjoying the pace of life in New York city. She recently presented her work in the MEESAS graduate conference at Columbia University, and is spending this summer 2017 interning at the South Asia Institute at Heidelberg University in Germany.

The 2021 Falak Sufi Memorial Essay Prize is now open. Kevorkian MA Students may submit their essays to kevorkian.center@nyu.edu by April 15 for consideration.

Competition for next year’s award will take place at the beginning of the spring semester 2022.   The Hagop Kevorkian Center remains indebted to the family of Falak Sufi for supporting this recognition of outstanding and original M.A. scholarship. 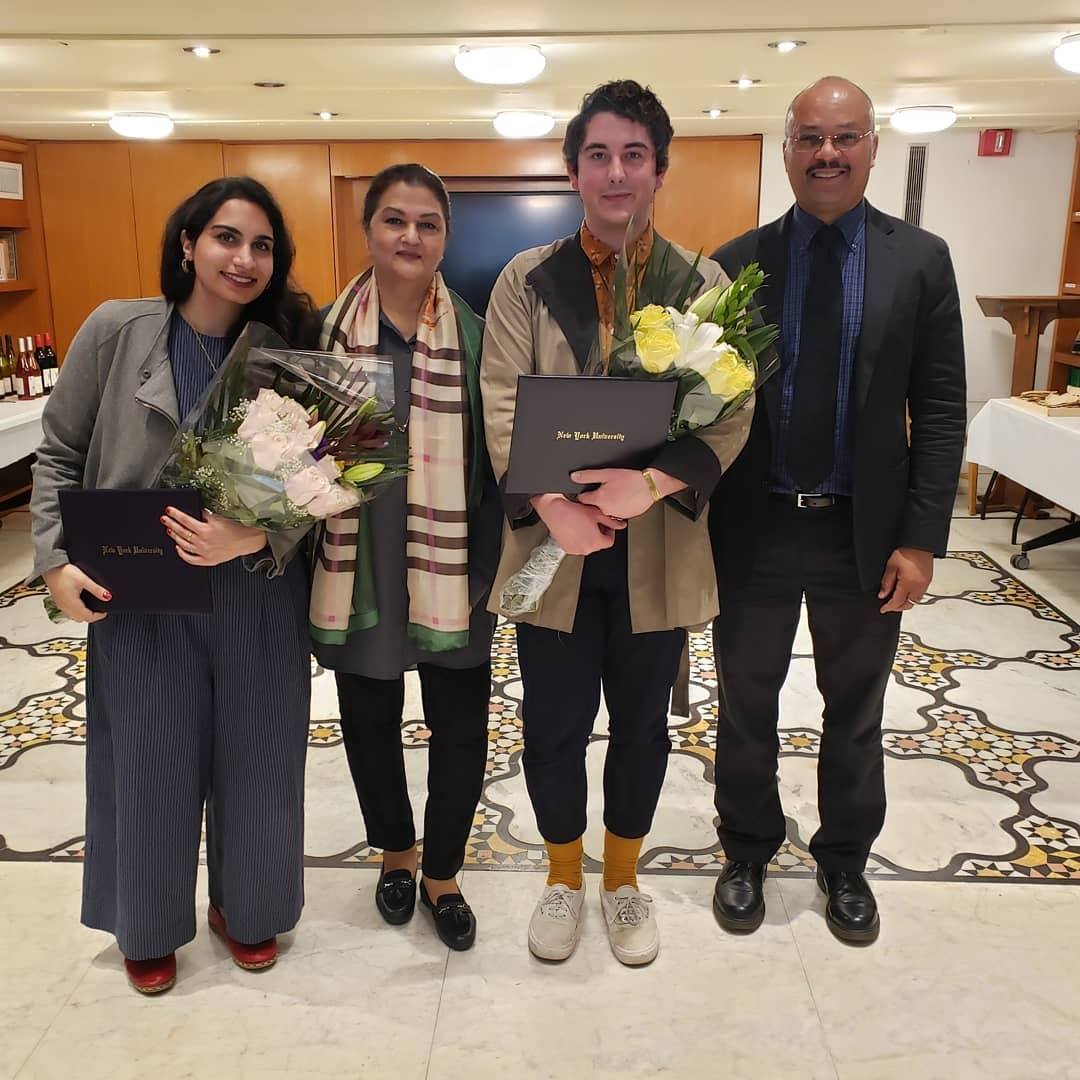 An honorable mention goes to a compelling essay that traces the authorship, circulation, and meaning of “al-Jihadiya,” an Upper Egyptian popular song narrating the farewell of a mother to the son recruited to war, and her helpless attempt to save him.  Placing it in its historical context, the author uses the song to open a complex set of questions that also reflect on how Egypt came to be gradually conceived as a nation.

The winning paper analyzes the Egyptian press during the period of the Aswan Dam’s construction, juxtaposing these media narratives with the complex, contentious processes of labor at the worksite itself. The essay also reconstructs the methods of recruitment, production, and remuneration at the High Dam, and situates worker unrest in 1962 in a trajectory of changing labor-management relations. It is a thorough and well-written historical essay that, in focusing on representations and processes of labor, brings to light social dimensions of development that both practitioners and scholars often elide.