Rethinking the Materiality of Energy: Infrastructure and the Politics of Electricity after Apartheid

Rethinking the Materiality of Energy: Infrastructure and the Politics of Electricity after Apartheid 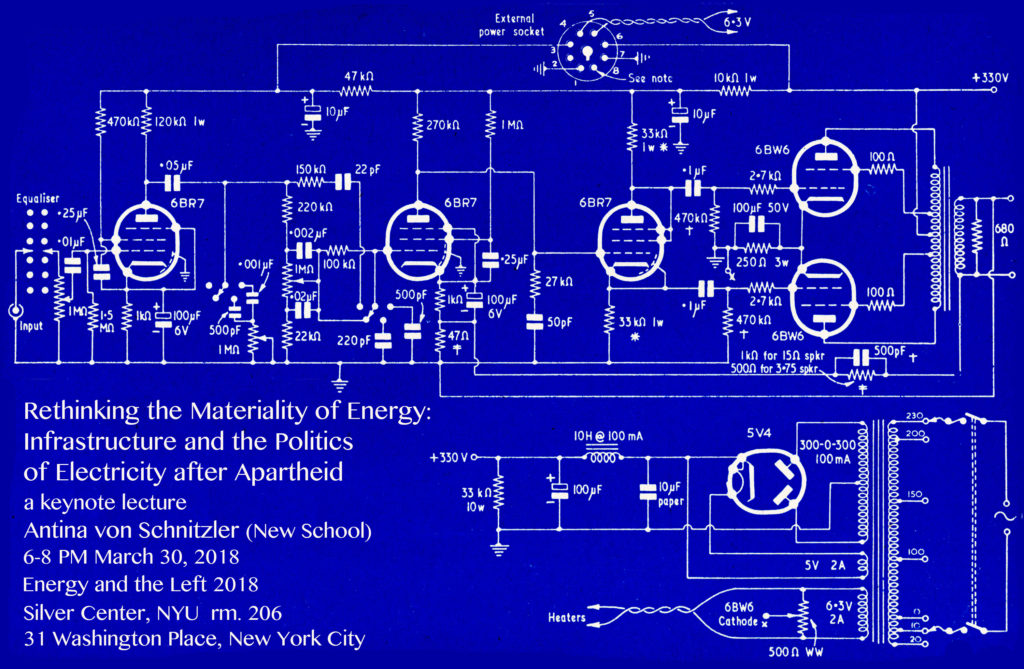 Antina von Schnitzler (New School) has recently published an innovative work on water politics in South Africa called Democracy's Infrastructure. She looks at how water meters in poor nieghbourhoods of South Africa were put in place by the late Apartheid regime in the 1980s to curb  robin hood style thefts from its utilities. By the 1990s, after the fall of Apartheid, these very same initiatives by poor people are castigated by the ANC regime as criminal acts. Schnitzler will examine the legacy of infrastructure on citizenship. Her lecture will take place at 6pm in Silver, room 206 on 30 March. Her talk is the keynote lecture for the Energy and the Left conference.

Antina von Schnitzler is an Associate Professor in the Graduate Program in International Affairs and an affiliate faculty member in the Department of Anthropology. Her research and teaching has focused on citizenship, human rights and political subjectivities, the anthropology of science and technology, liberalism and neoliberalism, colonialism and postcoloniality, energy politics, and South Africa. Funded by a Wenner-Gren Hunt Postdoctoral Fellowship, she recently completed a book based on ethnographic and archival research in Johannesburg and Soweto, entitled Democracy’s Infrastructure: Techno-Politics and Protest after Apartheid (Princeton University Press, 2016). The book received an honorable mention in the Association for Political and Legal Anthropology Book Prize competition in 2017. She is currently working on a new book project on coal and energy politics in South Africa. She has been a Visiting Fellow at the Kellogg Institute for International Studies, University of Notre Dame, and is a Research Associate at the Wits Institute for Social and Economic Research (WiSER), University of the Witwatersrand, Johannesburg.