Congratulations to Dr. Rosanna Flouty on being appointed Director of the Program in Museum Studies Dr. Flouty received her PhD from CUNY Graduate Center following a Master's from Rhode Island School of Design and a BA from Emory University.  Rosanna is in and of the Museum Studies program, having taught in the program as a guest lecturer starting in 2004, and as an adjunct instructor for "Museums and Interactive Technologies" in 2010.  She has been a full-time faculty member in Museum Studies since 2016.  And she has been a revered teacher and colleague throughout.  Rosanna is an accomplished museum practitioner and scholar, teaching about museum and arts education, especially around new forms of technology, accessibility, museum education and experience design.

Dr. Flouty began working in the area of museum education and digital media, developing innovative projects when museums were beginning to incorporate technology in their programs. Her museum career started in 1993 at the Michael C. Carlos Museum in Atlanta. In 2000, she began working at the Guggenheim Museum, then at the Institute of Contemporary Art/Boston, and Art 21. She has also acted as an ongoing consultant and project manager for numerous museums including the Whitney Museum of American Art, the Broad Museum in Los Angeles, American Museum of Natural History in New York, San Francisco Museum of Modern Art, the Jewish Museum, and the New-York Historical Society to design projects related to museum education, digital media, archiving, audience perceptions, and community engagement.

Those of us here in Museum Studies who have had the pleasure of working with Rosanna know that she is not only immensely accomplished, but dedicated to the future of Museum Studies. We're so excited to see where she takes our department next. Please join us in thanking and congratulating Rosanna on this momentous occasion. A heartfelt congratulations to Maria Nicanor, who has been named as the new Director of Cooper Hewitt, Smithsonian Design. Her dedication to museum work is what all of us in the Program in Museum Studies strive to achieve. We are incredibly excited to see where her leadership takes the Cooper Hewitt!

Congratulations to our alumna, Lowry Palmer.

Congratulations to our alumna, Lowry Palmer, on her new position as the Assistant Collections Manager position at Mount Vernon.

Latin American folx migrating to the U.S. for refuge have been put in the national spotlight due in large part to an escalation in Immigration and Customs Enforcement (I.C.E.) raids, the detention of undocumented immigrants, and child separation policies. Tensions have contributed to a dramatic surge in anti-Immigrant and racist rhetoric making immigration at the U.S. - Mexico Border one of the most hotly contested discussions in United States politics.

Concern for the future of immigration policy and U.S. race-relations have amplified the discourse surrounding anti-immigration sentiment; thus, contributing to a revival in artistic and journalistic attention. By tracing artistic observations of the border, their works reveal and illuminate a history of long-standing bigotry.

Faces Change, but Immigrant Prejudice Remains includes historical photographs that connect today’s xenophobia to that of the past, establishing a consistent narrative of discrimination in the United States directed towards Asian, brown, Black, and Indigenous folx.

As a direct response to the current political moment, we hope that confronting these stark images will inspire reflection and action as you walk through the city streets.

Support for the exhibit was provided by NYU Art in Public Places, operating under the aegis of the Office of the Provost.

Jane Anderson has been mentioned in the most recent New Yorker article on the Penobscot language. You can read the article here.

Elaine Ayers wrote an article for Slate titled The Grim Open Secret of College Bone Collections, How did the remains of Black children killed by police end up in a Princeton course? You can read the article here.

Congratulations to our alumna, Felicia Garcia, on her new podcast!

Our alumna, Felicia Garcia just started a new podcast titled Exhibiting Kinship. It is a podcast dedicated to discussing the many ways Indigenous people are working to radically change the museum world. You can learn more about it here.

Congratulations to Miriam Basilio who just published a piece in Hyperallergic's special edition on propaganda connecting her research on Franco with our current president.

Congratulations to our alumna, Alexis Fleming

Congratulations to our alumna, Alexis Fleming on her new position as Curatorial Associate at the MOFAD (Museum of Food and Drink) in Brooklyn, NY.

Click here to learn more about the project professor Jane Anderson was a part of.

CONGRATULATIONS TO OUR ALUMNA, KELLIE HONEYCUTT

Congratulations to our alumna, Kellie Honeycutt, who was just promoted to Deputy Director of the Public Art Fund! You can read more about it here.

Congratulations to our 2019 Grads! 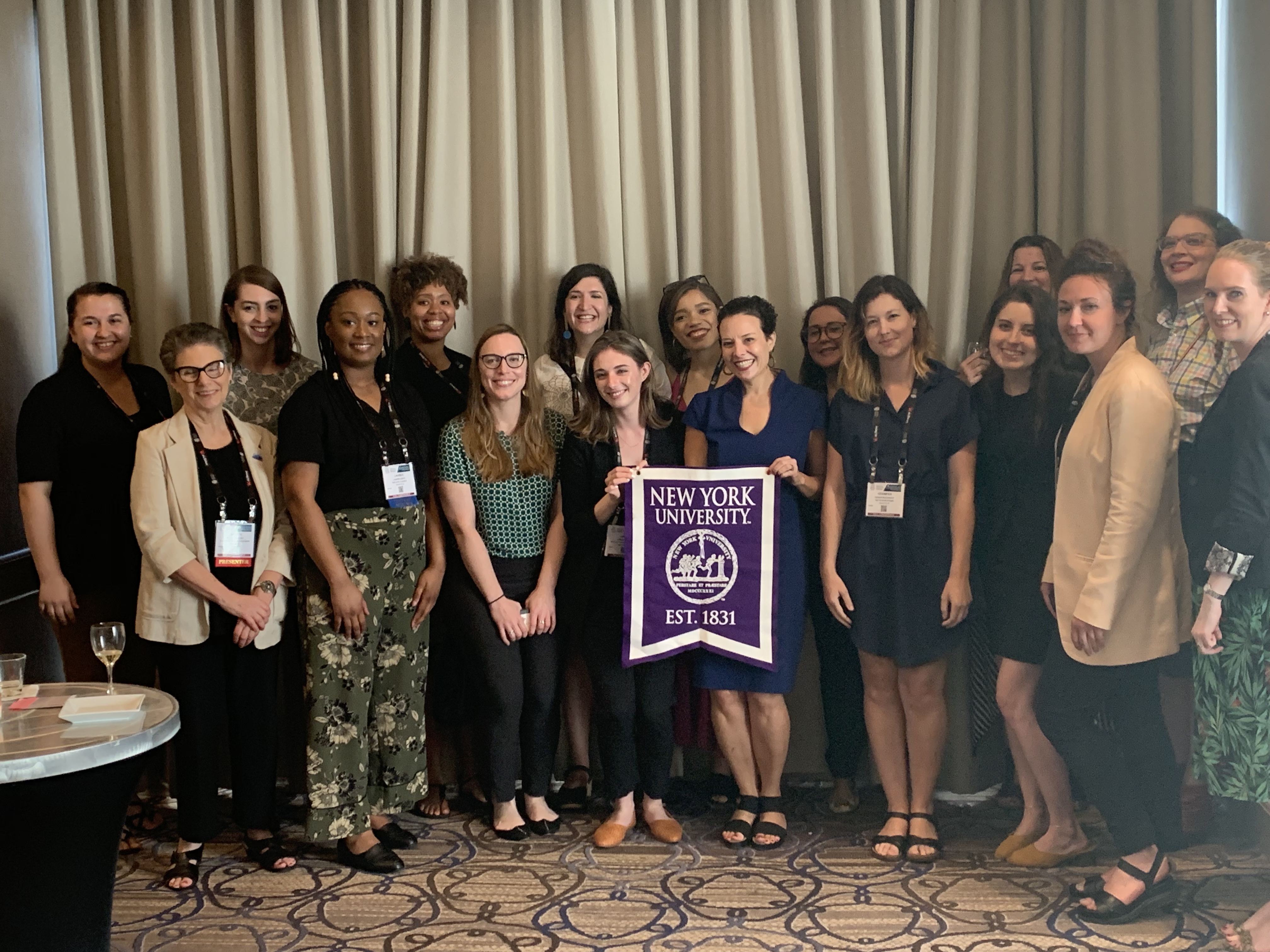 Congratulations to our alumna, Kimberly Kitada

Congratulations to our alumna, Kimberly Kitada on her new position as Curatorial Assistant at the MOCA in Los Angeles. She's currently working on research for upcoming 2020 exhibitions and would be happy to connect with other Museum Studies alumni at  kkitada@moca.org.

The first guest of our new feature Alumni Spotlight feature is Grace T. Weiss. Grace graduated from the Program in Museum Studies in 2015, and was interviewed by faculty member Rosanna Flouty. In their conversation, Grace talked about how she began to explore her career path through course projects, thesis research, and internships in New York, and the particular experiences that finally lead to her current position of Assistant Registrar for the Media Arts Collection at the San Francisco Museum of Modern Art.   Read full interview here.

We are excited that Joanna Epstein has received the 2018 GSAS Master's Award for Academic Achievement in the Humanities for her Museum Studies Master's Thesis entitled "Racialized Places: Historic Sites, National Self-Image and the African American Historical Record" (MA Thesis Advisor - Dr. Marissa H. Petrou, Faculty Fellow, Program in Museum Studies). Awards of $500.00 were given for the most distinguished master's thesis or final project in each academic division to those who received their master’s degrees in May 2017, September 2017, or January 2018. Recipients of this award will be acknowledged at the GSAS Master’s Convocation ceremony in May 2018. Joanna graduated with MA in Museum Studies in May 2017 and currently works as Administrative Aide at the Center for Experimental Humanities, New York University.

The Best Thesis award was given to Joanna Epstein for her thesis “Racialized Places: Northern Historic Sites, National Self-Image and the African American Historical Record.”

Mathilde Lejeune has been awarded the Program's Distinguished Thesis award for her work "Putting a Halt to Heritage Heist: International Efforts to Combat Art Trafficking During Armed Conflict."

Sara Lowenburg received Honorable Mention for her thesis Serving Those Who Served: Engaging Veterans in Museums.

Congratulations to the Class of 2017!

A Russian translation of Bruce Altshuler’s book, The Avant-Garde in Exhibition: New Art in the Twentieth Century, will be published in Spring 2018 by the Garage Museum of Contemporary Art, Moscow, with a new introduction by the author.  He will speak in Moscow on the occasion of the book’s publication.  In February 2018, for a conference at Arte Fiera in Bologna, Italy, Dr. Altshuler lectured on the relationship between the art market and exhibitions of the historical avant-garde, and in March 2017 he spoke at and organized a session on art museums for the conference Museums and their Publics at Sites of Conflicted History, at the Polin Museum of the History of Polish Jews, Warsaw, Poland.  Other museums at which he has lectured in the past few years include the Brooklyn Museum, Detroit Institute of Arts, Stedelijk Museum (Amsterdam), Tensta Konsthalle (Stockholm), Jumex Museum (Mexico City), Museum Sztuki (Lodz, Poland), Centre Georges Pompidou (Paris), and Serralves Museum (Porto, Portugal). In 2016 Dr. Altshuler published essays in The Art Newspaper on the achievements of Tate Modern (London) and on the Metropolitan Museum of Art’s opening of the Met Breuer.

Dr. Miriam Basilio (joint appointment in the department of Art History with Museum Studies) was granted tenure and promoted to Associate Professor effective September 1, 2013. She is on sabbatical leave for academic year 2013-14, working on her second book which focuses on the role of Alfred Barr in defining the "problematic term 'Latin-American art'" through his particular strategies of collection and display at The Museum of Modern Art. Earlier this year, Miriam Basilio lectured on "The Evolving Latin American Canon" at the Meadows Museum, Southern Methodist University (Dallas, TX), in a two-day international symposium, From the Other Shore: Narratives and Perspectives on Spanish & Latin American Art. The symposium, which took place on May 1-2, 2013, was organized to "analyze the various ways in which ideas and perceptions about Spanish and Latin American art have evolved in the last decades..." Here is the full program of the symposium; Professor Basilio's talk and the Q&A session afterward are here and here. She also gave a presentation at the Encuentros trasatlánticos: discursos vanguardistas en España y Latinoamérica, held at the Museo Nacional Centro de Arte Reina Sofía (Madrid, Spain) in July. Professor Basilio also lectured at the Institute of Fine Arts in October. Her talk "The Evolving Canon: Latin American Art at MoMA, 1945-55" was part of the Institute's Latin American Forum. In November 2013 she will lecture at the University of California, Santa Barbara.

Dr. Glenn Wharton left his position as Media Conservator at the Museum of Modern Art last summerin 2013 to accept a Clinical Associate professorship in Museum Studies, effective July 1, 2013. Since then he has launched a number of research projects related to the disposition of contemporary art in museums. In 2018 he began an in-depth survey of time-based media holdings at the Metropolitan Museum of Art. In 2017 he was awarded a Guest Scholarship at the Getty Conservation Institute for research leading to a book on the conservation of contemporary art. In 2015, with Co-Director Deena Engel from Computer Science, he launched the Artist Archives Initiative at NYU. He continues to serve on the board of the International Network for the Conservation of Contemporary Art -- North America (INCCA-NA), and as advisor to NYU's Grey Art Gallery and other arts organizations. He organized a roundtable discussion at NYU in October 2013 on Archiving Performance Art for the Future with artist Lorraine O'Grady, and spoke at the University of North Carolina on Collaborative Heritage Preservation with Descendant Communities. In November 2011, Professor Wharton published The Painted King: Art, Activism, & Authenticity in Hawai’i with the University of Hawai’i Press. 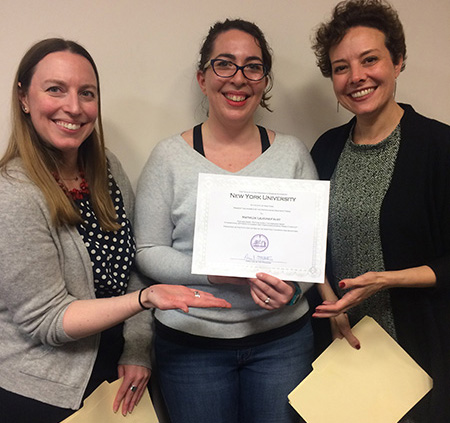