A Surrealist Soirée at the Morgan 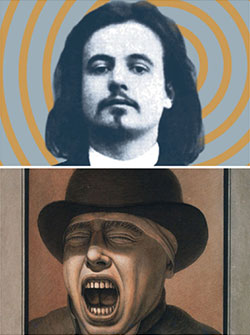 An evening exploring the unconventional, imaginary worlds of Parisians Jean-Jacques Lequeu and Alfred Jarry. Curators will delve into a selection of fantastic and humorous works in Jean-Jacques Lequeu: Visionary Architect and Alfred Jarry: The Carnival of Being during a series of brief gallery talks. Participate in the surrealist drawing game Exquisite Corpse and relax with a prix fixe French wine and cheese tasting. Enjoy French inspired music by the Brooklyn based band The Bailsmen playing Gypsy Jazz and Vintage Swing.

Alfred Jarry: The Carnival of Being
January 24 to May 10
The subversive works and personality of the French writer Alfred Jarry (1873-1907) played a crucial role in the transition from the nineteenth-century avant-garde to the emergent modernist movements of the twentieth century. The exhibition considers some of the writer’s many innovations through his engagement with printed matter and the visual arts.

Jean-Jacques Lequeu: Visionary Architect. Drawings from the Bibliothèque Nationale de France
January 31 to May 10
Architect and draftsman Jean-Jacques Lequeu (1757-1826) donated one of the most singular and fascinating graphic oeuvres of his time to the Bibliothèque nationale de France.  Some sixty of these drawings will be on view in the first New York City retrospective to bring significant public and scholarly attention to one of the most imaginative architects of the Enlightenment.

Public programs for Jean-Jacques Lequeu: Visionary Architect. Drawings from the Bibliothèque nationale de France and Alfred Jarry: The Carnival of Being are presented by The Morgan Library and Museum in cooperation with La Maison Française of NYU