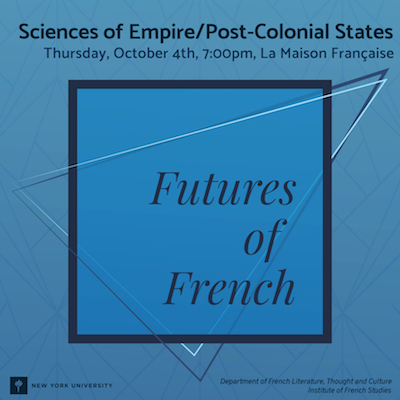 With Robyn d’Avignon and Justin Izzo

“If we could today—without the burden or benefit of precedent, tradition, or institutional inertia—invent a field called ‘French and Francophone Studies,’ what would it look like?”
- Laurent Dubois & Achille Mbembe

Robyn d’Avignon is Assistant Professor of History at NYU. She is a historian and anthropologist of West Africa, with interests in natural resource extraction, scientific research, and state formation. Her book project—Shadow Geology: The Search for Subterranean Knowledge in West Africa—explores the precolonial and colonial roots of ongoing debates over the rights of agrarian households to mine gold. Drawing on research conducted in Senegal, Guinea, and France, the project documents how colonial and post-colonial states profited from the mineral discoveries of their citizens and subjects, while simultaneously degrading African extractive practices as wasteful, primitive, and criminal.

Justin Izzo is Assistant Professor of French Studies at Brown University. He was trained in both literary studies and cultural anthropology, completing field research in Paris and Réunion Island. He is particularly interested in the history of French anthropology and its relationship to fiction; literature and film from the Caribbean, West Africa, and the Indian Ocean; and representations of race in the novel. He has recently completed his first book, titled Experiments with Empire: Anthropology and Fiction in the French Atlantic (under contract with Duke University Press).

Co-sponsored by the Institute of French Studies and the Department of French Literature, Thought, and Culture