May 68 in Theory - Patrice Maniglier 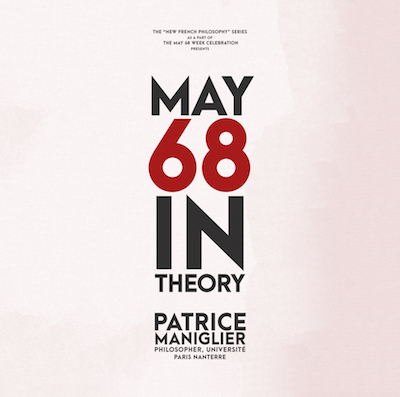 A true event cannot merely be the object of already given theories: it challenges them and interrogates the very sense it makes to practice theory in general. This is eminently true of May 68 in France: it has been an event for “Theory.” However, its theoretical implications have been too often obfuscated by hasty interpretations that projected on it some vague Zeitgeist aptly coined “68 Thought.” In order to avoid such simplifications, we need to get back to the perception the actors of the time themselves identified those theoretical stakes. It so happens that they in part were conflated with the reception of “structuralism.” The paper will patiently try to understand how such abstract theoretical constructions could be deemed at stake in the social and political commotion of those two months. It will appear that May 68 didn’t confirm or refute any particular theory, but rather imposed a problem that is still ours today: the concept of an event that does not make history by the way it changes institutions as the French or the Russian revolutions did, the concept of an event that maybe even overpasses the very categories of History.

Co-sponsored by the Departments of Comparative Literature; French Literature, Thought, and Culture; Media, Culture, and Communication; the Institute of French Studies; and the Graduate School of Arts and Science