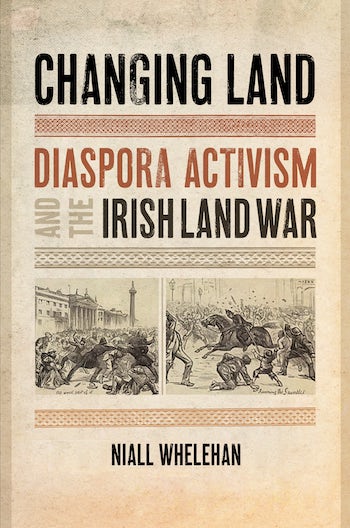 The Irish Land War represented a turning point in modern Irish history, a social revolution that was part of a broader ideological moment when established ideas of property and land ownership were fundamentally challenged. The Land War was striking in its internationalism, and was spurred by links between different emigrant locations and an awareness of how the Land League’s demands to lower rents, end evictions, and abolish “landlordism” in Ireland connected with wider radical and reform causes.

Changing Land offers a new and original study of Irish emigrants’ activism in the United States, Argentina, Scotland, and England and their multifaceted relationships with Ireland. Niall Whelehan brings unfamiliar figures to the surface and recovers the voices of women and men who have been on the margins of, or entirely missing from, existing accounts. Retracing their transnational lives reveals new layers of radical circuitry between Ireland and disparate international locations, and demonstrates how the land movement overlapped with different types of oppositional politics from moderate reform to feminism to revolutionary anarchism. By including Argentina, which was home to the largest Irish community outside the English-speaking world, this book addresses the neglect of developments in non-Anglophone places in studies of the “Irish world.” Changing Land presents a powerful addition to our understanding of the history of modern Ireland and the Irish diaspora, migration, and the history of transnational radicalism.

Dr. Niall Whelehan's Changing Land: Diaspora Activism and the Irish Land War is the third volume in the Glucksman Irish Diaspora Series from NYU Press. The book is based on research supported by a Marie Skłodowska-Curie Intra-European Fellowship and examines radical networks in Ireland and Irish migrant communities in Scotland, England, the United States, and Argentina. Dr. Whelehan will be in conversation with historian Dr. Jo Guldi.

Dr. Niall Whelehan is a Senior Lecturer in History at the University of Strathclyde Glasgow. His work focuses on the nineteenth and early-twentieth centuries and themes of migration, political violence, nationalism, and radicalism, mainly relating to Ireland and the Irish diaspora. He completed his doctorate at the European University Institute, Florence.

Dr. Jo Guldi is an Associate Professor of History at Southern Methodist University in Dallas, Texas where she teaches courses on the history of Britain, the British Empire, modern development policy, and property law. Her latest book The Long Land War from Yale University Press comes out in March 2022.

NYU Press has kindly offered a discount code for attendees of this event. Please enter WHELEHAN30-FM for 30% this title and free domestic shipping.