Francis Carroll, America and the Making of an Independent Ireland: A History 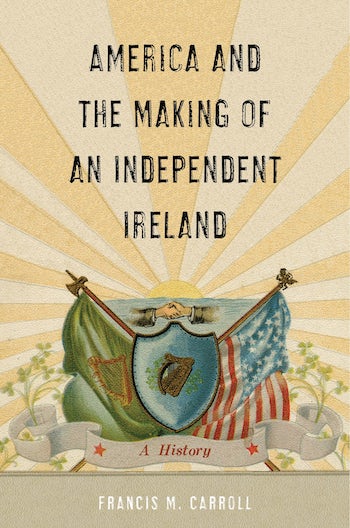 America and the Making of an Independent Ireland, the first volume in the Gluckman Irish Diaspora Series, centers on the diplomatic relationship between Ireland and the United States at the time of Irish Independence and World War I. Beginning with the Rising of 1916, Dr. Francis M. Carroll chronicles how Irish Americans responded to the movement for Irish independence and pressured the US government to intervene for Ireland. Carroll’s in-depth analysis demonstrates that Irish Americans after World War I raised funds for the Dáil Éireann government and for war relief while shaping public opinion in favor of an independent nation. The book illustrates how the US government was the first power to extend diplomatic recognition to Ireland and welcome it into the international community. Overall, Carroll argues that the existence of the state of Ireland is owed to considerable effort and intervention by Irish Americans and the American public at large.

Copies are available from NYU Press.

Dr. Francis M. Carroll is Professor Emeritus at the University of Manitoba and a Fellow of St. John’s College, where he taught history. He is the author of a number of books on Irish history, including Money for Ireland: Finance, Diplomacy, Politics, The First Dáil Éireann Loans, 1919–1936, and The American Commission on Irish Independence, 1919: The Diary, Correspondence and Report.

Dr. Carroll will be interviewed by Dr. Miriam Nyhan Grey for this event.

Praise for America and the Making of an Independent Ireland: A History:

"A major contribution to the study of Irish nationalism, Carroll's impressive and magisterial analysis of Irish and American relationships between 1916 and 1928 demonstrates that American diplomatic recognition of the Irish Free State was a major contribution to its standing by helping to establish its legitimacy after the Irish Civil War." ~Maureen Murphy, Professor Emerita of Teaching, Learning and Technology, Hofstra University

"Lucidly written and exhaustively researched, this is an abundantly readable and definitive study which confirms unequivocally the decisive role played by Irish American organizations in support of Ireland’s long aspired quest for national statehood. Francis Carroll’s study lends clarity to the occasionally contested date as to when in fact Ireland actually achieved sovereign independence. What this book makes clear is how international recognition of Ireland’s independent sovereign status was manifestly achieved under William Cosgrave’s government in 1928." ~Thomas E. Hachey, University Professor of History Emeritus, Boston College

"This is a much-needed and robust account of the role that the American government, polity and the public had in shaping an independent Ireland from 1916 to 1928. The complexities of the relationship between the nations is clearly outlined in a work that is highly readable and enjoyable. This body of scholarly work also offers readers an opportunity to admire and value Francis Carroll’s defining contribution to American-Irish diplomatic and political relations in the early twentieth century." ~Professor emeritus Bernadette Whelan. Member Royal Irish Academy, University of Limerick, Ireland