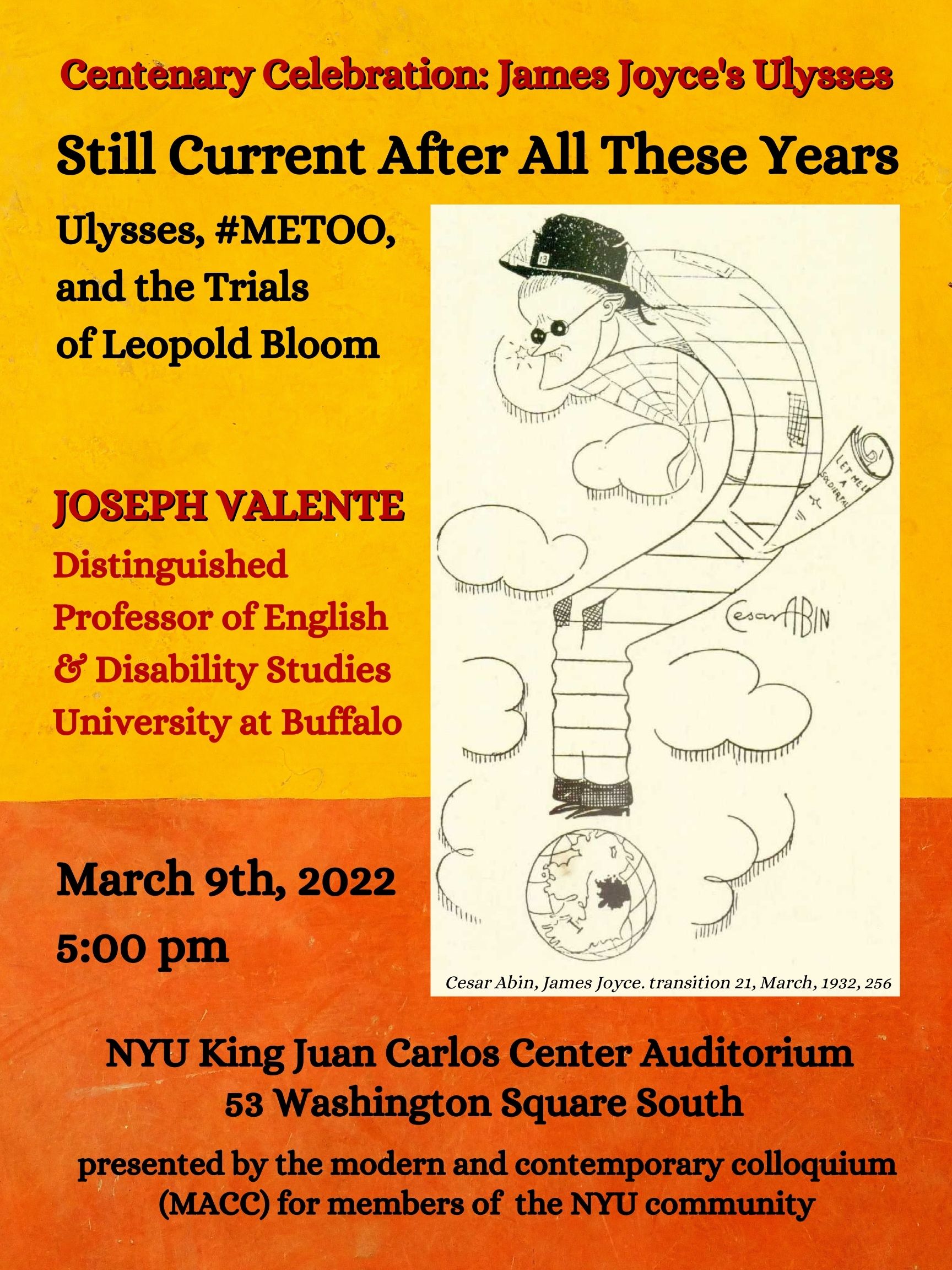 To mark the centenary of the publication of James Joyce's Ulysses, we welcome Joseph Valente, Distinguished Professor of English and of Disability Studies at the University at Buffalo.  He will present a lecture entitled "Still Current After All These Years:  Ulysses, #METOO, and the trials of Leopold Bloom."

The lecture will take place in the auditorium of the King Juan Carlos Center, 53 Washington Square South, on Wednesday, March 9, at 5pm.

In person attendance is restricted to members of the NYU community.  However, a filmed version of the talk will be broadcast with a live Q&A, date TBA.

Joseph Valente is the author of The Myth of Manliness in Irish Nationalist Culture, 1880-1922 (University of Illinois Press, 2011), Dracula’s Crypt: Bram Stoker, Irishness and the Question of Blood (University of Illinois Press, 2002, 2012), and James Joyce and the Problem of Justice: Negotiating Sexual and Colonial Difference (Cambridge UP 1995, 2009). Most recently, he co-authored, with Margot Backus, The Child Sex Scandal and Modern Irish Literature: Writing the Unspeakable (Indiana University Press, 2020). His edited collections include Quare Joyce (University of Michigan Press, 1997), Disciplinarity at the Fin-de Siecle (with Amanda Anderson, Princeton University Press), Urban Ireland (a special issue of Eire-Ireland) Joyce and Homosexuality (a special issue of the James Joyce Quarterly), Yeats and Afterwords (with Marjorie Howes, Notre Dame University Press, 2014), and Ireland in Psychoanalysis (with Seán Kennedy and Macy Todd, a special issue of Breac). In addition, he has published 70 journal articles and book chapters in such venues as Critical Inquiry, Diacritics, Novel, ELH, Narrative, Modern Fiction Studies, Journal of Modern Literature, Eire-Ireland, Irish University Review, James Joyce Quarterly, Joyce Studies Annual, Studies in Romanticism, The Journal of Literary and Cultural Disability, and The Journal of Critical and Religious Theory.