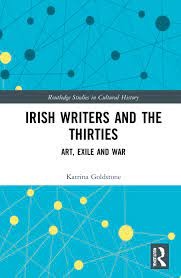 In her recent book Irish Writers and the Thirties, Art Exile and War, Katrina Goldstone accessed previously unavailable archival material and revealed the extent of Irish writers’ political engagement with the grand causes of the 1930s, whether it was support for republican Spain or fighting fascism. This talk will focus on Irish Jewish writers, Leslie Daiken and his friend, Michael Sayers who sought to express their identities as antifascist Jews on the Left in very different ways, whilst also engaging with the currents of broader cultural transnational radical movements of the Thirties. Their life trajectories, plus the journalistic and literary output of both men, further illuminate the role of literary anti fascism in the interwar years, as well as adding another piece to the mosaic of Irish literature in the 1930s. Introductions by Professor Hasia Diner and moderated by Dr. Kelly Sullivan.

Katrina Goldstone has written extensively on minorities, cultural diversity and Jewish communities since the 1990s. She has contributed features, in depth articles and reviews to numerous publications in Ireland and the UK. She has also been a regular contributor to many arts programmes on RTE, the national broadcaster, commenting on position of minorities in Irish society, Jewish history, Jewish writers, the Holocaust, Anne Frank, anti racism and various aspects of cultural diversity. She is the author of Irish Writers and the Thirties: Art, Exile & War, published by Routledge in December 2020, in their Studies in Cultural History series.