Telling Stories In and Out of School: The Glucksman Ireland House Oral History Program 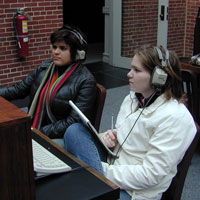 In 2005 Glucksman Ireland House at New York University embarked on a project to bring oral history formally into the classroom. Professors Linda Dowling Almeida and Marion Casey, and later, Miriam Nyhan developed a curriculum that introduced students to the discipline of oral history and gave them an opportunity to create a public history document to complement the interviews they conducted with selected members of the Irish American community in the New York City metropolitan area. Inspired by the success of incorporating oral history into their own research and recognizing that the postwar generation of Irish was aging or slipping away, the professors decided to accelerate their oral history collection.In addition to targeting the community for the classroom program, Professor Nyhan initiate a separate collection project to capture personal and neighborhood memories, particularly from those members of the community involved with the Irish counties associations. We have gathered students and faculty, along with excerpts from their interviews, to reflect on the program in this 20th anniversary year of teaching and programming at Glucksman Ireland House.